University Observatory Films A Real UFO: This Is What Some Of Them Actually Look Like

University Observatory Films A Real UFO: This Is What Some Of Them Actually Look Like Thu Dec 10, 2015 9:39 pm

Admin
Posts : 106871
Join date : 2012-01-04
Location : Woodstock Nation
University Observatory Films A Real UFO: This Is What Some Of Them Actually Look Like

Written by Arjun Walia
Take a look at the picture above (see the film footage from video below). What you’re looking at is an irrefutably legitimate photo of an Unidentified Flying Object (UFO). For those of you who are unaware, the existence of UFOs has already been officially verified in the ‘mainstream’ world, as dozens of governments have released thousands upon thousands of UFO related documents over the past few years. In the process, they have revealed a high level of interest from the military and defence intelligence agencies around the world in this topic.
For example, here is the latest batch of UFO files that were released by the United Kingdom. Here is a four page U.S. Defence Intelligence Agency/NSA report detailing one out of hundreds (if not thousands) of UFO encounters with military jets. In fact, these objects are not only visually confirmed by the pilots who scramble to get a closer look, they are also confirmed on both air and ground radar.
If you want to see some more examples and documents of what happens when the military tracks a UFO, you can read this article that we published last year on the subject.
“I’m skeptical about many things, including the notion that government always knows best, and that the people can’t be trusted with the truth. The time to pull the curtain back on this subject is long overdue. We have statements from the most credible sources – those in a position to know – about a fascinating phenomenon, the nature of which is yet to be determined.” John Podesta, former White House Chief of Staff for Bill Clinton, Barack Obama’s right hand man (councillor), and the current head of Hilary Clinton’s presidential campaign. Taken from Leslie Kean’s 2010 New York Times bestseller, UFOs: Generals, Pilots, And Government Officials Go On The Record, in which Podesta wrote the forward.
The picture shown above, again, comes from the video that’s linked below. The shot was taken from the Hessdalen Interactive Observatory in Norway, which is an observatory that’s used by scientists at the University of Ostfold, Hessdalen. It is the only 24 hour UFO observatory in the world. Powered by an automatic high definition camera, it takes multiple pictures every single minute to capture and examine the strange aerial phenomena in the area that people have been reporting for years.
“The light phenomena here in Hessdalen in Norway started in late ’81 with a lot of sightings, at the most it was 20 sightings a week. The local people here started to see the light down in the valley, sometimes close to their houses and they were wondering what could this be. Some was a little bit afraid too, because no one could give them an answer, what could it be?” – Sc.EE Erling Strand, University of Ostfold (source) 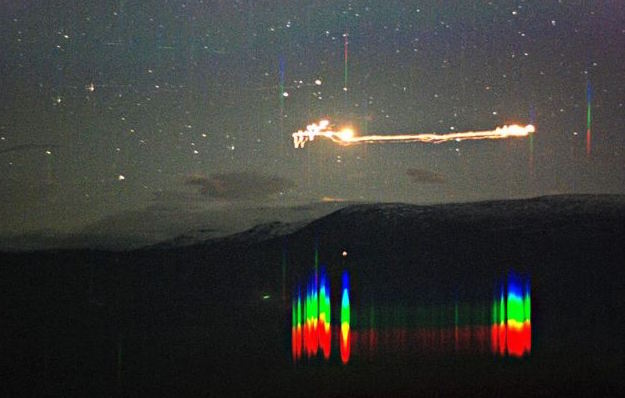 The picture below serves as just one explanation for why scientists decided to establish this permanent UFO observatory. Radar and cameras have picked up a number of astonishing pictures of the unexplained light phenomenon since its inception.
“The phenomena behaves very different. Some is moving very slowly and some lights can move very fast. The fastest speed we have ever measured was 30,000 km an hour.” – Erling Strand (source)
Yes, you read that correctly: 30,000 km per hour. This is significantly faster than the highest capability of any known manmade aircraft. Yet this is merely one example, out of thousands, of strange objects being documented performing, as UFO Research Richard Dolan said at the Citizens Hearing that took place in Washington, D.C., “impossible maneuvers at incomprehensible speeds.”
Behind the scenes, high ranking Air Force officers are soberly concerned about UFOs. But through official secrecy and ridicule, many citizens are led to believe the unknown flying objects are nonsense.” Former head of CIA, Roscoe Hillenkoetter, 1960 (source)
This campaign of official secrecy, alluded to by CIA director Hillenkoetter, seems to have begun after President Truman announced on television that this subject is discussed at every conference that is held with the military. After this, publicity of these incidents went completely ‘black,’ into the realm of unacknowledged and waived SAPs. These programs may not exist publicly, but they do indeed exist. They are better known as ‘deep black programs.’ A 1997 US Senate report described them as “so sensitive that they are exempt from standard reporting requirements to the Congress.”
“Everything is in a process of investigation, both in the United States and in Spain, as well as the rest of the world. The nations of the world are currently working together in the investigation of the UFO phenomenon. There is an international exchange of data.” – General Carlos Castro Cavero (1979), from UFOs and the National Security State, Volume 2, written by Richard Dolan


Video Footage Of The Picture

The footage below comes straight from the observatory, as featured in the documentary The Day Before Disclosure:
We knew that the Earth was flat, we knew that we were the center of the universe, and we knew that a man-made heavier than air piece of machinery could not take flight. Through all stages of human history, intellectual authorities have pronounced their supremacy by ridiculing or suppressing elements of reality that simply didn’t fit within the framework of accepted knowledge. . . . But are we really any different today? Have we really changed our acceptance towards the things that won’t fit the frame? Maybe there are concepts of our reality we have yet to understand, and if we open our eyes maybe we will see that something significant has been overlooked. – (source) Terje Toftene, producer and director of the film (start at 3:99)
The production company behind the film is New Paradigm Films, and they are well aware of the fact that, soon enough, modern civilization is likely to be confronted with the biggest paradigm shift regarding our perception of reality that has been seen in human history. Through their films, they wish to shed light on serious issues that have remained in the dark for too long.
48:35 is the starting time for the video footage of the picture that this article is referring to, the video should already automatically start at that time.


“There are objects in our atmosphere which are technically miles in advance of anything we can deploy, that we have no means of stopping them coming here . . [and] there is a serious possibility that we are being visiting and have been visited for many years by people from outer space, from other civilizations. . . . This should be the subject of rigorous scientific investigation and not the subject of ‘rubbishing’ by tabloid newspapers.” – Lord Admiral Hill-Norton, Former Chief of Defence Staff, 5 Star Admiral of the Royal Navy, Chairman of the NATO Military Committee (source)
For more quotes along the same lines as the one above, you can check out this article.
For our most recent articles on the UFO/extraterrestrial subject, you can visit the exopolitics section of our website here. (source)
Originally posted @ Collective Evolution

» Arecibo observatory has now totally collapsed
» Real News , Real Talk. Real People ....BECAUSE YOU CAN HANDLE THE TRUTH
» That’s No Moon. It’s an Alien Observatory Created to Keep an Eye on Us!
» SCI-FI FILMS AND AWE
» Why Did the FBI Raid This Solar Observatory?