Cities on Pluto ? by TS Caladan For the first time, we can examine the surface of Pluto, close-up. Recent ‘New Horizons’ photos reveal stunning STRUCTURES of what could only be “cities.” Take a good hard look, then do your own investigations along with others on YouTube at what has been uncovered. Are you sure Pluto should be discarded as a planet? Don’t cities and buildings prove otherwise? Why did it take so long for the public to see the surface of Pluto? Here is only a glimpse: Possibly Pluto and its intricate system of satellites are NOT too cold and too harsh to support Life. Newly NASA-released photos often had contrasts too high for clear resolutions and other methods smudged what would have been sharp pictures. Some photos shown here have been enhanced or cleaned up so quality was restored. Investigators do not believe we are seeing ancient cities…but, in fact, we are seeing living/breathing human or alien societies on Pluto as well as on other bodies in the Solar System (indicated by patterns of unnatural structures). Study clips of investigators, especially in the above region of Pluto. Sections are explored and fantastic details have already been discovered in these first photos. What will be found later with more to view? Small domes, roads, paths, artificial things with angles to large structures are plainly viewed. See clear details and their shadows. In the distance, the mountains, mesas or ‘buildings’ certainly have an unusual geometry to them as does other parts of Pluto…
When we examine the planet CLOSER… 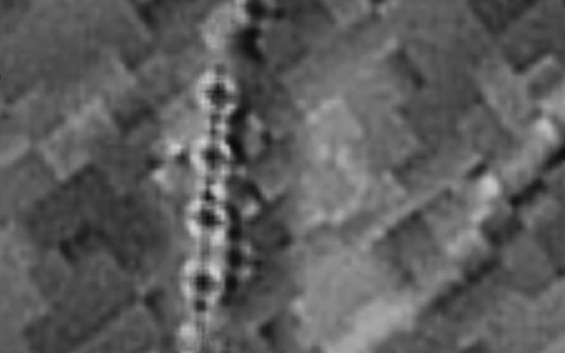 Above is a detail from one particular Plutonian Plain, shown below. An incredible system of grid patterns are revealed once contrast-enhancements are tuned. Photos come to life with patterns very similar to squared and rectangular shapes of Earth’s rural areas or even suburbia seen from high above. Why wouldn’t unofficial sources call sections of Pluto CITIES?

Why aren’t these photos in color? Why is the public always cheated and not shown the good stuff?
Why do feds treat us stupidly? Why meter out knowledge and Truth at a snail’s pace when people can handle a whole lot more?
Just tell us the whole story! Never, I guess is the answer.

Check out the World-Mysteries links of ‘Alien Structures Throughout the Solar System’ & 2nd link for information on Pluto. So much more has been revealed since posting of first link. The following is the NEW INFORMATION with Pluto’s photos’ first bits of analysis. Hope this will inspire you to explore YouTube (preferably in HD) and realize…
We’ve been lied to. But if you study on your own, you might put the pieces together. It’s never too late to learn. Open your eyes ~


Thanks to Tray for sharing here!

» MORE CITIES ON PLUTO! by T.S.Caladan
»  Tent Cities Are Taking Over Vast Stretches Of Our Major Cities (And It Is Only Going To Get Worse)
» The Answer To China’s Ghost Cities: Destroying Farm Production [Agenda 21] By Forcing The Rural Chinese Into Newly Built $Consumer Based Urban Concentration Cities. THEN DEPOPULATION!
» “TS Caladan’s Comedy II” – 15th Published Book by TS Caladan
» Which Pluto Generation Are You?