An unusual geological event (Santa Clarita landslide) in California was once again preceded by a large Carbon Monoxide release Tue Mar 08, 2016 8:58 am

What is being described as an unusual geological event in California was once again preceded by a large Carbon Monoxide release according to the earthwindmap, see above
The unusual geological event a popular road used by residents and cyclists near Santa Clarita was closed Friday after a landslide caused severe buckling of the soil and pavement.
The sever buckling appears to have been preceded by another large release of carbon monoxide in the same area the day before.
This carbon monoxide release is much smaller than the one on February 27th but still enormous on a global scale.
The buckling was first spotted Thursday on a 150- to 200-feet stretch of road, which prompted the closure of Vasquez Canyon Road between Lost Creek Road and Vasquez Way.
"The land is still moving," said Steven Frasher of the Los Angeles County Department of Public Works.
Engineers and geologists were examining the road to determine what was causing it to crack and move, he said.
Photo Daily Mail. 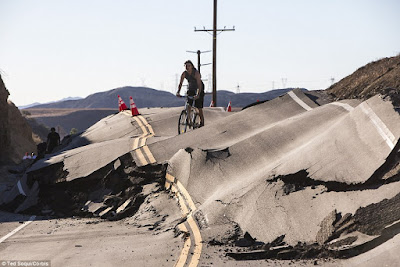 The hillside slipped but instead of spilling over the road, it went under the pavement, Frasher said. Now the road is growing upward and expanding.
Frasher said there is no way to stop the soil movement, so for now geologists and engineers are just watching the ground and hoping it stops growing.
The road will be closed until further notice.
Santa Clarita residents who use Vasquez Canyon Road were advised to use Sierra Highway as an alternative route.
Small landslides are not unusual in the area. But the large size of this type of buckling is "truly unusual," Frasher said.
On February 27th an enormous amount of Carbon Monoxide leaked into the atmosphere along the West coast of America see below.

It was the amount of Carbon Monoxide which was simply stunning and led NASA to claim it was a satellite glitch.
It led The Big Wobble to ask Is the San Andreas Fault about to shift? Unprecedented amounts of Carbon Monoxide released into the atmosphere along the West coast of the US
It is well understood that large amounts of Carbon Monoxide is released into the atmosphere before an earthquake, however the amount of Carbon Monoxide release on the 27th of Feb is as far as I can tell unprecedented.
This new release of carbon monoxide coupled with the landslide leads me to wonder, is the San Andreas Fault about to shift or is shifting and is NASA's equiptment better than they believe it is?