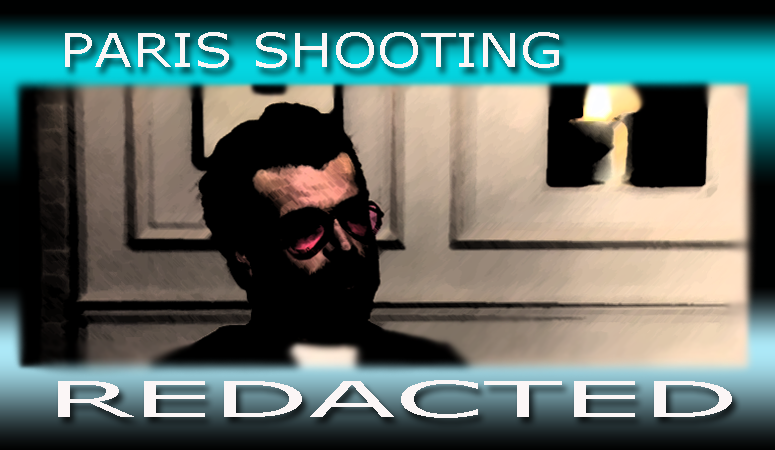 By Bernie Suarez
Now you see, it now you don’t. One minute Eagles of Death Metal frontman Jesse Hughes is speaking directly, clearly, honestly and spontaneously about what he organically saw with his own eyes, what he was feeling and thinking as suspicious security personnel behaved oddly the night before the Paris shooting. The next minute Hughes is pulling a “Michael Hess” post-9/11 style 180-degree artificial retraction on his testimony.
Of course the controllers realize that the first organic version of the story confirms foreknowledge on the part of security. That foreknowledge would fit perfectly with the lack of clear evidence of the official story version of the story. The retracted artificial NEW narrative attempts to conveniently remove this foreknowledge and suspicious behavior. But in the end notice that the actual odd behavior and the security personnel who were mysteriously not working that day is still factual, only now we’re asked to chalk it up to coincidence. Now where have we heard this before?
We’ve seen these classic about-faces in many false flag shootings in the past including assassinations of JFK and RFK and almost all false flag events including 9/11 where WTC 7 firsthand “explosions” eyewitness Michael Hess spilled the beans only to later then pull a 180 and completely changed his story. In the aftermath of the RFK assassination we have live recordings of detectives literally forcing a key witness to change her story in what is said to be part of MKUltra mind control experiments conducted on witnesses who told stories damning to the official version.
In every case we see people telling a genuine story from the bottom of their heart, and after apparently being intimidated or mind controlled (as with RFK witnesses) by the controllers to redact their testimony, all of a sudden put out comments that are completely and directly opposite of what they had previously stated.
No one should be fooled by these sudden retractions that realign the story back to the original fake reality we call the “official story”. Sorry mainstream media, but I wholeheartedly believe Mr Hughes’ ORIGINAL testimony. He said it when he was expressing his organic reality, free of coercion. Now it is crystal clear to see that he is under outside pressure and control to say otherwise. No one speaks their heart honestly and then without any coercion whatsoever suddenly changes their story. That is about as unnatural a behavior as you can get. We ONLY see this behavior in movies; usually it’s the part where the mafia-government agent threatens the witness. This behavior would never happen otherwise.

This is a perfect example of what we mean by distinguishing the full-dimensional, real, full and organic reality versus the 2-dimensional artificial world the control system needs you to believe. This thing is real and anyone who threatens the artificial reality they have worked so hard to create and maintain will be threatened or intimidated in some way as I’m sure Hughes now understands very clearly.
Hughes is no different than any other musician, actor or celebrity who all came under attack in Operation Chaos of the 1960s. Everyone should research [url=http://www.maebrussell.com/Mae Brussell Articles/Operation Chaos.html]Operation Chaos[/url], a CIA counterculture operation where “anti-government” celebrities with powerful influence were systematically drugged, blackmailed, threatened, intimidated, silenced and murdered if they did not cooperate the same way that Eagles of Death Metal frontman Jesse Hughes is doing now.
So we can rest assured that Hughes had a talk with someone who told him that for his own safety, perhaps for the sake of the future of his band he better change his story. And clearly whatever he was told worked. His “story” now fits in comfortably with the official story just a couple of days later, mind you. He is no longer a threat to their narrative and their agenda, and for him all is well again. The threat of exposure of the globalist agenda, as far as the controllers are concerned, is now over – order, they hope, can now be restored.

Hughes told the Fox Business Network last week that six guards at the Bataclan venue never came to work the night of the attack, and “it seems rather obvious that they had a reason not to show up.”
On Friday, Hughes apologized: “I humbly beg forgiveness from the people of France, the staff and security of the Bataclan, my fans, family, friends and anyone else hurt or offended by the absurd accusations I made.”
“My suggestions that anyone affiliated with the Bataclan played a role in the events of November 13 are unfounded and baseless — and I take full responsibility for them,” he said in a statement.

Disturbingly, the 180-degree retraction sparks memories of MKUltra experiments and how a key Robert F Kennedy assassination witness was coerced and intimidated. As we saw with the RFK witness intimidation, Hughes later goes on to blame HIMSELF suggesting he was possibly delusional about his original beliefs:

Hughes blamed the lingering effect of the attack for his accusations that the security team may have been in on the attack.
“I’ve been dealing with non-stop nightmares and struggling through therapy to make sense of this tragedy and insanity. I haven’t been myself since Nov. 13,” he wrote. “I realize there’s no excuse for my words, but for what it’s worth: I am sincerely sorry for having hurt, disrespected or accused anyone.”

This apparently is the telltale sign of someone who is completely under their control. Blame yourself and talk about yourself like you are mentally struggling, thus wiping away any possible self-credibility you thought you had. Nobody in their right mind tells a clear story then blames themselves for being mentally unclear and in need of “therapy” for saying what they said.

Was Hughes under mind control when he put out this statement? Did someone write this retraction out for him and force him to put his name behind it? The possibilities are endless, but the important thing is to realize what is happening here.
Stories like these serve as indicators of who is under the control of the control system and who is not. The system will harass and destroy anyone who does not cooperate – plain and simple. For this reason it is important to remember that celebrities are nothing more than puppets for the ruling elite or they wouldn’t be celebrities to begin with.
The lesson to learn here is that if you are going to come against the system don’t expect the system to work for you. You must choose who your master will be and you cannot serve two masters. Either you stand for truth at any cost and that which is real, organic and genuine; or you stand with the deceivers who control the media, Hollywood, all the politicians and all the celebrities. Do not mistake that which is real and that which is artificial.

Bernie is a revolutionary writer with a background in medicine, psychology, and information technology. He is the author of The Art of Overcoming the New World Order and has written numerous articles over the years about freedom, government corruption and conspiracies, and solutions. A former host of the 9/11 Freefall radio show, Bernie is also the creator of the Truth and Art TV project where he shares articles and videos about issues that raise our consciousness and offer solutions to our current problems. His efforts are designed to encourage others to joyfully stand for truth, to expose government tactics of propaganda, fear and deception, and to address the psychology of dealing with the rising new world order. He is also a former U.S. Marine who believes it is our duty to stand for and defend the U.S. Constitution against all enemies foreign and domestic. A peace activist, he believes information and awareness is the first step toward being free from enslavement from the globalist control system which now threatens humanity. He believes love conquers all fear and it is up to each and every one of us to manifest the solutions and the change that you want to see in this world, because doing this is the very thing that will ensure victory and restoration of the human race from the rising global enslavement system, and will offer hope to future generations.

Credit: Chapman BaehlerEagles of Death Metal frontman Jesse Hughes has alleged that the terrorist attack on the band's show at the Bataclan in Paris last November could have been an inside job. In an interview with Fox Business, Hughes suggests that the security staff at the concert hall had knowledge of the planned attacks.
"When I first got to the venue and walked in, I walked past the dude who was supposed to be the security guard for the backstage. He didn't even look at me," Hughes remembers. "I immediately went to the promoter and said, 'Who's that guy? I want to put another dude on,' and he goes, 'well some of the other guards aren't here yet,' and eventually I found out that six or so wouldn't show up at all."
Hughes didn't want to make a definitive statement about what be believes may have happened due to the ongoing police investigation, but he did say, "It seems rather obvious [the other guards] had a reason not to show up."
In response to Hughes' claims, a rep for the Bataclan has issued a statement to Variety, which calls the EODM singer's allegations "insane."
"Jesse Hughes spread some very grave and defamatory accusations against the Bataclan teams," the statement reads. "A judicial investigation is undergoing. We wish to let justice proceed serenely. All the testimonies gathered to this day demonstrate the professionalism and courage of the security agents who were on the ground on November 13. Hundreds of people were saved thanks to (these agents') intervention."
Eighty-nine people were killed when terrorists opened gunfire on the Bataclan November 13. Last month, Eagles of Death Metal played their first headlining show in Paris since the attack.
Copyright © 2016, ABC Radio. All rights reserved.
Friday, March 11, 2016 at 11:22AM Music News Group