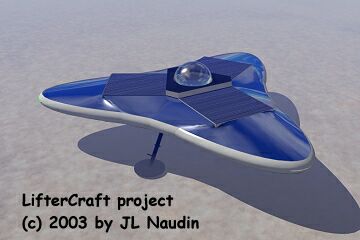 All over the world, a strange hobby is gathering force — the making of cheap, lightweight craft of aluminum foil, balsa wood, and thin wire, which "thrust" themselves silently upward in defiance of gravity. The model airplane-type structures, superficially resembling triangular kites, have no wings, propellers, or moving parts. Indoors or out, the craft leap upward against nylon tethers that hold them back from zooming ever higher!

The "power" source for such craft? Nothing more than a ground-based high-voltage power supply (30,000 volts and above) — often scavenged by tinkerers from old computer monitors. The internet-linked hobbyists compete to see how much mass (actually, weight) of payload (now in the several grams range) their "lifters" can carry. They proudly display their new designs and accomplishments in internet images and video clips; consult the several websites referenced to view the videos and the original material.1

Even more amazing about this space-age hobby: There is no clear, generally accepted physics explanation about how these craft work! In electronics terms, they are asymmetrical capacitors (one side or electrode holding more charge than the other) onto which charge has been applied from a DC source. There is an unmistakable force generated that makes these craft experience movement in the direction toward the smaller-sized electrode.

The "skeptics," of course, have the usual knee-jerk reaction that this odd phenomenon can be explained very simply. They contend that the craft are simply imparting motion to ionized air molecules and are thus relying on jet thrusting action of propelled mass, i.e. it's just "ion wind." But some (not all) experiments, and all calculations of the "ion wind" explanation that I have seen, find it quite insufficient (by orders of magnitude, depending on the assumptions) to explain the "antigravity" thrusting. Are these lifters then, in part, "reactionless thrusters," or are they manifesting, in part, genuine antigravity effects?

Know well that some of these lifters have been turned 90 degrees and used in pairs to thrust horizontally about a shaft, creating an interesting motor effect. (What are the energetics and ultimate efficiencies of such motors? These are interesting and important questions, to be sure.) It is not possible to say one way or the other how lifters work their magic— and that is part of the excitement and charm of this area. This is a field ripe for open-ended experimentation and development of products.

Bear in mind that the conditions and parameters of individual experiments are very important— firm conclusions about physics cannot be drawn from a single isolated experiment, no matter how carefully done. What is the voltage level, degree of asymmetry of the capacitor, orientation, steady DC power vs. pulsed DC power, etc.? It may well be, for example, that the truly interesting physics emerges only at higher voltage levels; there is evidence of that in the historical record of"electrogravitics"— Thomas Townsend Brown's work (see below)— from which this field emerged.2

If you are challenged by the prospect of doing your own experiments, or perhaps you just want to participate in this new lifter hobby, by all means go to it. Tim Ventura, a computer systems man who fell into this vocation/avocation, has put up an excellent website for hobbyists and others who are just getting into the field: http://www.americanantigravity.com

The site has relevant links to technical material of all kinds. Tim Ventura even sells a computer CD with many megabytes of material on it. He was kind enough to let us reprint several of his carefully done "how to" construction segments. So even without web access, newbies can begin to make their own lifters right from this issue of Infinite Energy.

We also reprint Ventura's gung-ho introductory essay (p. 16), which relates how an Alabama company, Transdimensional Technologies, which made the first of the modern lifter embodiments, led to launching his American Antigravity enterprise. Finally, I have posted some good references at the end of this Introduction. Particularly apt is one published in January 2002 by the staff of our collegial publication, Electric Spacecraft Journal.3 That same journal reports the replication of one of the T.T. Brown experiments by Larry Davenport.4

Proceed with caution! This is a fun hobby, but high voltages are involved and we want you all to be safe and alive to see where this lifter phenomenon ultimately leads.

Do not undertake experimentation without fully understanding the hazards involved!

Lifters Antigravity and the Physics of a new Quantum Theory
(22:40)

The most important aspect of the lifter phenomenon is recapitulation of the work of American inventor and physicist Thomas Townsend Brown (1905-1985), who grew up in Zanesville, Ohio. From his teen years, Brown was captivated by the relationship of electrical phenomena to gravity. He worked on many inventions that seemed to bear on this connection, and out of which the term "electrogravitics" seems to have emerged. (One of his influential professors in Ohio, Dr. Paul Biefield, allegedly was a classmate of Albert Einstein— an interesting historical connection— and the origin of the term "Biefield-Brown effect.")

Tom Valone5,6 has compiled much useful information about the patents and work of T.T. Brown. He notes, "Unknown to many non-conventional propulsion experts, T. Townsend Brown's electrogravitics work after the war [WWII] involved a classified multinational project. American companies such as Douglas, Glenn Martin, General Electric, Bell, Convair, Lear, and Sperry-Rand participated in the research effort. Britain, France, Sweden, Canada, and Germany also had concurrent projects from 1954 through 1956." 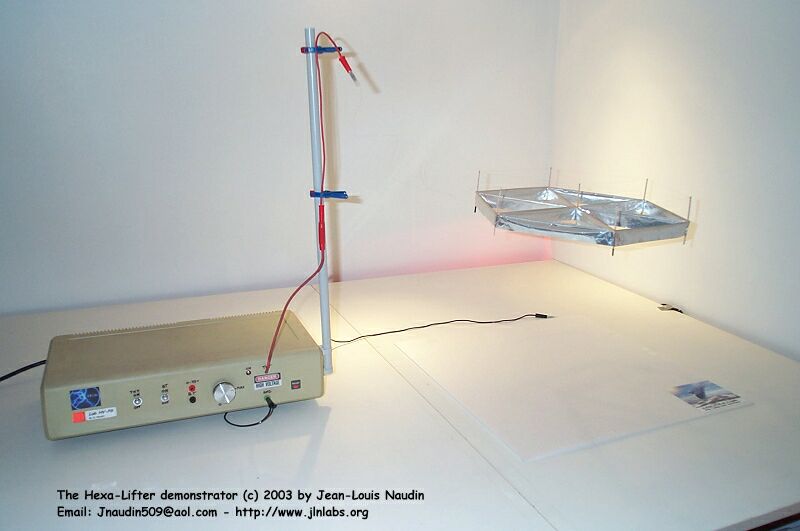 The NASA Patent— and Denials

Another remarkable development in this lifter saga occurred this year. A NASA employee was awarded a U.S. patent, #6,317,310 on the asymetrical capacitor thruster and it is assigned to NASA! We have reproduced key introductory portions of this patent (see p. 30) which seems to be grand theft of the intellectual property of T.T. Brown, with no referencing thereof! The abstract glibly states:

"The high voltage source applies a high voltage to the conductive elements of sufficient value to create a thrust force on the module inducing movement thereof." There is no discussion whatsoever in this patent of the infamous "ion wind" explanation of the thrust. Given that NASA is in the business of space travel in vacuo, it is implicit that the inventor and agency believes this technology is relevant to spaceflight— either that or it is grossly misleading people. Is NASA somehow trying to slip potentially reactionless thrusters (i.e. Newton's Third Law— violating technology!) or heretical "antigravity" technology into the public arena? Probably not.

As it is often said, "Never attribute to malice what is more readily explained by stupidity." From an internal NASA memo (sent to Ventura in late May 2002):

An article appeared in the May 11, 2002, issue of Wired.com/news, by Michelle Delio, about the controversial, and as— yet unresolved, "Lifter" effect; also known as "Asymmetrical Capacitors," "Electrogravitics," and the "Biefeld-Brown effect (circa 1955)." This effect claims anomalous thrust from high-voltage capacitors, and therefore, falls within the scope of Breakthrough Propulsion Physics (BPP). Marc Millis [of NASA] was quoted in the article.

The version cited in the Wired article is from Tim Ventura, a UNIX programmer for AT&T Wireless. This topic is controversial because most of the recent work, work that was not coordinated with the BPP Project, has focused on promoting claims rather than on credibly resolving the unknowns, and has published these claims in inappropriate venues. Such activities have tainted the overall credibility of BPP research, by association. Fortunately, a new effort, involving a reprogrammed Congressional earmark, has been tasked to conduct an independent experimental test of these "Asymmetrical Capacitor" claims. This new effort, managed by MSFC's Gary Johnson, involves a MSFC-managed earmark to the West Virginia Institute for Software Research (ISR). This work is now being coordinated with BPP Project.

Yet other "PR" on this topic from NASA alleges that the ion wind explanation suffices to explain Biefield-Brown! Well, the physics establishment has had almost a century to deal with this question and has simply ignored it, but now NASA, with its patent already in hand, proposes to perform a funded study on it. . .toward what end?

The basic questions prompted by the lifter phenomenon are these:
1) How do electrical phenomena relate to gravity?
2) Are there "reactionless" forces that can be generated by electromagnetic devices? The know-it-alls of the physics establishment have preferred to deal with the question of gravity's relationship to "electromagnetism" with its favored grand unified theories. "Reactionless forces" are simply too much for the poor physics community to deal with in virtually any forum— so it doesn't discuss them at all— that would be dangerous to its enterprise, like discussing cold fusion dispassionately, without malice.

Whenever actual devices come along, such as the gravity shielding experiment of Evgeny Podkletnov and others,8 the Establishment develops paroxysms of denial. It is going absolutely berserk already when the "lifter" phenomenon is brought up. It knows subliminally that it can't explain it satisfactorily, so it thinks it can deal with it with a few jokes from spokesman Robert Park. But unlike cold fusion, the lifter phenomenon is already absolutely repeatable on demand. And, it looks like technological applications are possible. Sooner or later, folks are going to find out that the Emperor-Fizzix-really has no clothes. For now, enjoy our coverage on this uplifting matter.