OUT OF MIND » THE INSANITY OF REALITY » RADIATION ALERTS » 65,000% Spike In Radiation Outside New York Nuclear Plant Is Likely Worse Than Fukushima

65,000% Spike In Radiation Outside New York Nuclear Plant Is Likely Worse Than Fukushima 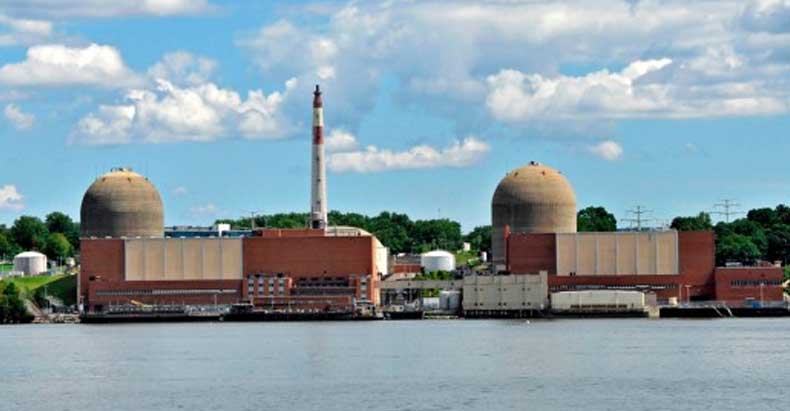 
Buchanan, NY — An uncontrollable radioactive flow from the Indian Point nuclear power plant continues leaking into groundwater, which leads to the Hudson River, raising the specter of a Fukushima-like disaster only 25 miles from New York City.
The Indian Point nuclear plant is located on the Hudson River, approximately 25 miles North of NYC, and serves the electrical needs of an estimated 2 million people. Last month, while preparing a reactor for refueling, workers accidentally spilled some contaminated water, containing the radioactive hydrogen isotope tritium, causing a massive radiation spike in groundwater monitoring wells, with one well’s radioactivity increasing by as much as 65,000 percent.

Entergy, the Louisiana-based company that owns the plant, chalked up the readings to “fluctuations that can be expected as the material migrates.” According to Entergy, the tritium contaminated water spill was contained within the plant, and never reached the Hudson or any other water source.
“There is no impact to public health or safety,” Entergy spokeswoman Patricia Kakridas told RT.

Of course, the tritium leak is the ninth in just the past year, four of which were serious enough to shut down the reactors. But the most recent leak, however, according to an assessment by the New York Department of State as part of its Coastal Zone Management Assessment, contains a variety of radioactive elements such as strontium-90, cesium-137, cobalt-60, and nickel-63, and isn’t limited to tritium contamination.

Despite the assurances from Entergy, the area around Indian Point is a “cancer cluster,” with the local rate of thyroid cancer rates registering at 66 percent higher than the national average, according to Joseph Mangano, Executive Director of the Radiation and Public Health Project (RPHP).
According to a report by RT:

Incredibly, Entergy completely rejects the notion that their plant’s operations have caused an increase in cancer rates.
“There is no relation whatsoever,” Kakridas claimed.
When the study was conducted by RPHP, over 20 million people lived within a 50-mile radius of the nuclear plant.
“Everybody who lives near a nuclear plant is exposed to radiation. Some plants are worse than others,” Mangano told RT. In the case of Indian Point, it is a very old plant, and “there is a greater danger because of a large population living close by.”

Numerous environmental groups call the latest problems just a symptom of a much larger issue and Gov. Andrew Cuomo is partnering with organizations The Sierra Club, Riverkeepers, Hudson River Sloop Clearwater, the Indian Point Safe Energy Coalition, Scenic Hudson and Physicians for Social responsibility in seeking the permanent closure of the plant.

The U.S. Nuclear Regulatory Commission sent a representative to the Indian Point plant, Neil Sheehan, who told CBS News that the NRC is continuing to review the recent tritium leakage at Indian Point.
“We recently sent a radiation protection specialist to the plant to assess the situation and learn more about what happened. He was assisted by our three Resident Inspectors assigned to the plant on a full-time basis,” he wrote in an email to CBS.

NRC is also currently reviewing Indian Point’s renewal license, which would authorize it to continue operating for another 20 years.
“It’s a disaster waiting to happen and it should be shut down,” Paul Gallay, president of Riverkeeper, a watchdog organization dedicated to protecting the Hudson River, told CBS News.
“The good news is, advances in alternate power sources, grid management and energy conservation have brought us to the day when the aging, unsafe Indian Point can close,” Gallay said.
He pointed out numerous sources of energy for the region, including 600 megawatts in transmission system upgrades and another 500 megawatts available through energy savings achieved through efficiency and renewable energy.
“There will be enough power to keep the lights on in our homes and hospitals, our businesses and schools — in every place that makes our communities healthy and vibrant,” Gallay said.
U.S. Senator Chuck Schumer has rejected calls for the immediate closure of the nuclear power plant by Cuomo and environmental groups, saying they should first demonstrate how to replace the energy produced at the power plant, which supplies 25 percent of the power to the New York City area.
“I have told some of the environmental people, if you can show me a plan to figure out a way to replace that electricity, fine, but if you can’t, it’s going to raise electricity rates 30 or 40 percent, which are high enough on average people and that’s not the way to go. In the meantime, I have emphasized very strong safety,” Schumer said.
While Schumer’s sentiments are understandable, the reality is that the sheer economic health costs of this plant’s operation far exceed the savings in energy bills. With so many alternative sources of producing clean energy, the reasoning for keeping such a toxic plant operational is baffling. One can safely assume that there is some vested financial interest in keeping this plant running; as always, simply follow the money.
About The Author
Jay Syrmopoulos is a political analyst, free thinker, researcher, and ardent opponent of authoritarianism. He is currently a graduate student at University of Denver pursuing a masters in Global Affairs. Jay’s work has been published on Ben Swann’s Truth in Media, Truth-Out, Raw Story, MintPress News, as well as many other sites. You can follow him on Twitter @sirmetropolis, on Facebook at Sir Metropolis and now on tsu.
Are you on Aweditoria? Aweditoria is a new social media platform where people share small stories and ideas based on interests. Focusing on spirituality, personal development, health, activism and etc. No distractions, just pure knowledge, it is free to use and it only takes few seconds to join,click here.
source:
Activist Post

OUT OF MIND » THE INSANITY OF REALITY » RADIATION ALERTS » 65,000% Spike In Radiation Outside New York Nuclear Plant Is Likely Worse Than Fukushima