(Stillness in the Storm Editor) Here is an analysis of the Rio Olympics ceremony for your consideration.

Any meanings offered herein should not be taken as the only ones available. Symbols by nature have the capacity to invoke many different insights, all of which have value when properly discerned.

Nanogirl joins Kev to discuss the recent opening ceremony to the Rio Olympics. We take a look at an event that is an advert for New World Order propaganda & this year was no different! We give our analysis into this latest NWO extravaganza & urge you to let us know your thoughts in the comments section below the article!

https://youtu.be/kLHlPt3oafs
During the show we discuss a number of images & first up was the centre spread from the Ecomonist magazine. Now, if you are wondering why we refer to this image, and even themed an entire show on the subject, it is because the Economist is a Rothschild publication & always gives us a clue to the agendas that are being played out. The following image came from their special edition in which they took a look at 2016 & the year ahead. 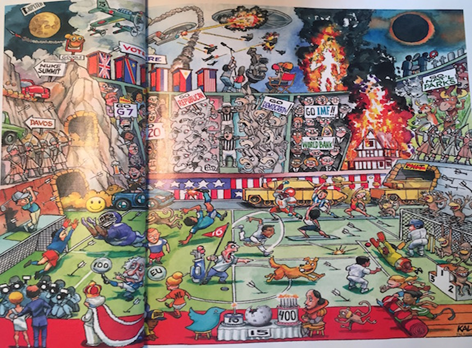 Nano & I discuss how the chaos in the picture above is very akin to the madness unfolding out the Rio opening ceremony & throughout the world right now.

We discuss some of the symbology and themes that we feel the organisers were trying to convey to the public. We witnessed a lot of augmented reality & CGI which is in step with the times that we are living.

One of the major themes being played out was that of life & fertility. There was even a strange depiction of the female reproductive parts which led to members of the public taking to twitter to question what they were seeing!

So, a giant vagina broadcast LIVE to a TV audience of a reported 3 billion people around the planet.

But it doesnt stop there!

The following image is an overhead shot of the Rio Olympic village. Perhaps its just us, but it appears as if there is a sperm cell going right through the centre.

One of our listeners made a stunning observation during the show and put together the following image….

If we think about the months leading up to the games, all the media were hammering into us was the fact that the Zika virus was potentially dangerous to athletes & spectators to the games. Zika is rumoured to cause problems with the growth of the embryo in the mother's womb causing a syndrome called Microcephaly. This causes a deformity in the child’s head & the brain to not develop fully.

A number of athletes have refused to attend the games due to the alleged dangers & others have chosen to have sperm frozen as a precautionary measure.

This is where the contradiction lies. In one hand they are warning people against the dangers of Zika & in particular the effects it can have on babies, yet at the same time the opening ceremony is all love, light & vaginas, while there is sperm symbolised at the athlete's village.

_________________________
Stillness in the Storm Editor's note: Did you find a spelling error or grammar mistake? Do you think this article needs a correction or update? Or do you just have some feedback? Send us an email at sitsshow@gmail.com. Thank you for reading.

» Conspiracy Documentary 2017 Illuminati Truths | Mystery of the Freemasons , Illuminati and Nwo
» UPDATE RESPONCE TO: Illuminati Vampire Cassandra's Letter To Humanity & The Departure of The Illuminati "Parents"
» Peaches Geldof Murdered By Illuminati For Exposing Illuminati Pedophilia
» Daddy Bush: The Illuminati Wizard of Oz & The Alien-Illuminati Connection
»  The Secret Order of the Illuminati.....This whole thing with the Illuminati and a Shadow Government may be unreal to many people, but stay with me for a while and give it a chance