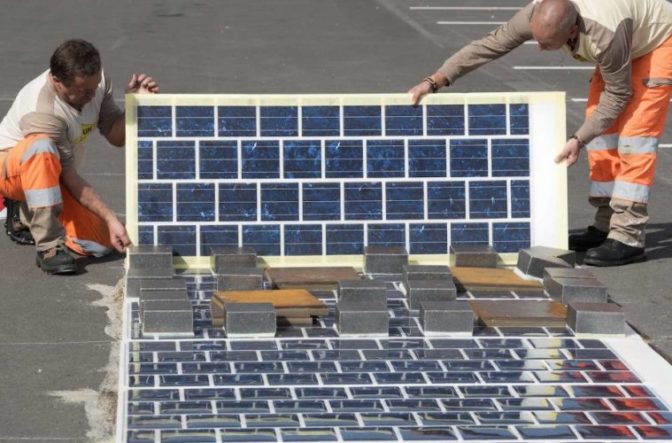 Written by Alexa Erickson
Back in February, the French government announced a plan to pave 1,000km (621 miles) of road with solar panels over the next five years. And it looks like they’re following through with their intentions.
A 1km (0.6-mile) route in the small village of Tourouvre-au-Perche in Normandy, France, has been covered with 2,800 square miles of electricity-generating panels. The route was inaugurated this Thursday by France’s Minister of Environment, Ségolène Royal.
According to official estimates, the road will be used by an average of 2,000 motorists per day. It is thought that it will be able to generate enough energy to power the city’s streetlights in the 3,400-person village. Before the solar-powered road was opened, road panels were tested at four parks across France.
France is now waiting to see if the current portion of the plan, which has been built with construction company Colas‘ Wattway technology, will fulfill the desires of the clean energy experiment.
The project has proven a costly one, with the country doling out 5 million Euros (around $5.2 million) for construction. But the innovative technology behind the panels is worth the cost. “Wattway panels are composed of cells inserted, in superposed layers, inside a thin film of polycrystalline silicon which can be applied directly on the pavement,” Forbes reports. “The cells are encapsulated in a resin substrate, to keep them rainproof, and the composite material is just a 7 mm thick, making it possible to adapt to thermal dilation in the pavement.”
According to Wattway, the solar panel road will generate 280 megawatt hours of power per year. Daily production will vary depending on weather, however. The company also noted that 767 kilowatt-hours (kWh) are expected each day, with electrical output of 1,500 kWh a day a possibility during the summertime.
Royal has been outspoken regarding her desire to see solar panels installed on French highways, claiming she would like to see them on one in every 1,000km. France has 1 million km of roads in total, though panels constructed on flat surfaces have been found to be less efficient than panels installed on sloping areas like roofs.
The new solar panel road will be in review for two years, with factors like lifespan and output being analyzed closely. Wattway Director Jean-Charles Broizat noted that the project is still in an experimental phase. “Building a trial site of this scale is a real opportunity for our innovation. This trial site has enabled us to improve our photovoltaic panel installing process as well as their manufacturing, in order to keep on optimizing our innovation,” he said.
Some people have raised concerns regarding the solar panel road, however. Network for Energetic Transition vice president Marc Jedliczka cautions, “It’s without doubt a technical advance, but in order to develop renewables there are other priorities than a gadget of which we are more certain that it’s very expensive than the fact it works.”
And Jean-Louis Bal, president of renewable energy union SER, said: “We have to look at the cost, the production [of electricity] and its lifespan. For now I don’t have the answers.”
Colas urges that the road has the potential to reduce the costs of producing the solar panels, however. The company says they have an estimated 100 other projects for solar-paneled roads, of which half are in France, and the others abroad.
Time will only tell how the road works out, but nonetheless, it’s another sustainable project in the works that proves governments are moving in the right direction.
Originally posted @ Collective Evolution