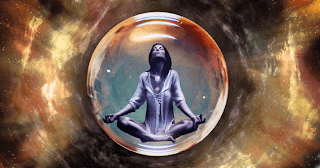 We are personalities who are similar to each other in various respects, and largely different from each other in other respects. That we are personalities, different from each other is also an empirical fact for us. Out of these two experiences, however, only one is true, the other is deception. Only one is a fact, the other is an illusion: the biggest illusion of the world.
The Beginnings of the Illusion
Let us take a closer look and examine which of the two experiences is true and which is a mere illusion.
Our life in this world begins when we are born. It is obvious that we are alive, but we are not yet a personality. At that time only the simplicity and greatness of the present, the existence is known to us.
The society and its culture is what shapes us into personalities while we grow up. We become a personality when our Ego is born. This is an inevitable step in the evolution of the Consciousness, so there is nothing wrong with that. The Ego is born, the separate little Self, as a focus of the Consciousness. That little Self obtains experience about itself and the world. In the natural course of evolution and as a result of the experience gathered, the Ego withdraws to give way to the process as a result of which Consciousness awakens to its own existence through a human form.
The progress of this evolutionary process can, however, be impeded by an illusion: the illusion that the individual is becoming somebody, a personality. We begin to become somebody, a personality, when we start to identify with the Ego, with that separate little Self. Under that illusion we believe that the Ego is a reality, and we are identical with the Ego, and the development of the separate little Self is in fact the foundation of our personal development. Nowadays it is virtually impossible to avoid that kind of illusion, since mankind has lived in it for thousands of years. The deception has become independent, and theillusion of the Ego is now a reality for the entire mankind, including naturally us.
The Nature of the Illusion
Our identification with the Ego makes us therefore somebody, a personality. On the other hand, our identification with the Ego will be the root of all our problems and misery. Since around us everybody considers the Ego as the most important center of their life, we are also brought up by our parents to have a powerful Ego, a centerpoint in our life, by the time we reach adulthood. It is necessary because our society–and its culture–favors and worships the individuals with a powerful Ego.
Our parents and teachers bring us up in the spirit of the permanent endeavors to become somebody, to become a strong personality, to become somebody different from what are now (to become bigger, more important and better than other people). That is why we always watch other people, we compare and measure ourselves to them. All that time, we also try to adjust our actions and deeds to the expectations and opinions of others. We keep dealing with the past and the future, and we never have sufficient time to stop and notice the immense illusion behind our life.
The End of the Illusion
An illusion may only survive if it is continually fanned and nourished. If we take a look around through innocent eyes (through eyes free of any kind of opinions) we will soon realize how every society nourishes and fans, through its various institutions, the illusion of the separate little Self, the Ego. How they nourish the illusion of ”somebodyness” in us and in everybody else. All that may take place because every society, every culture is based upon individuals, and if those individuals disappear, they wake up from their ”somebodyness,” the former modus operandi of that society collapses.
That is why Eckhart Tolle is perfectly right when he asserts that the world can only change from inside. The internal change means that we wake up from our ”somebodyness” and we begin to understand what our mission is in the evolutionary progress ofthe Consciousness.
We must therefore wake up from the illusion of our ”somebodyness” in order to concentrate our attention on reality. That reality is nothing but the innermost empirical fact in our life, the fact that we live, and we constitute a vibrating Consciousness, full of life. That is the reality that has been shrouded from us by the illusion, the mistake that we concentrated all our efforts on sustaining our ”somebodyness.”
If we stop nourishing that illusion, it will vanish after a while. In order to severe the power line of the illusion, we must learn how to notice the vividness and beauty of the present moment. Once we are able to accept the present moment, we are able to accept ourselves and we are able to enjoy the simplicity, tranquility and peace of existence. The Ego and the experience of ”somebodyness” then disappear, and we remain nothing but pure, vibrating energy, Life itself.
~From the book: Frank M. Wanderer: The Revolution of Consciousness: Deconditioning the Programmed Mind

(C) Frank M. Wanderer, 2013-2017
You can republish our articles for free, but please include the author’s name and a link to our homepage (www.frankmwanderer.com)
Thanks to: http://powerofconsciousness.blogspot.co.uk