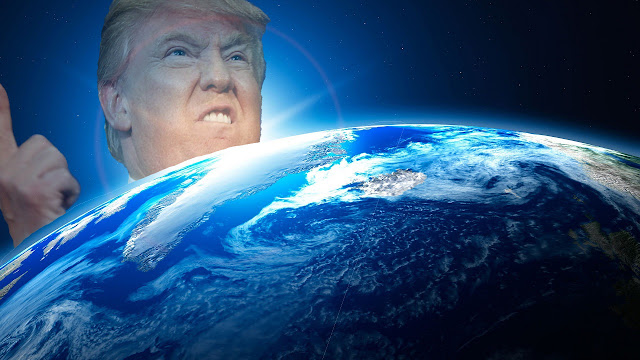 This week NASA announced that soon after the inauguration, Donald Trump's ego could now be seen from space.  They went on to allude that if it keeps growing, it may soon envelop the earth like an aura.  Not normally known for their sense of humor, perhaps NASA is pushing back against Trump's executive mandate placing a gag order on all federal agencies; forbidding them to speak with either congress or the press.

This came as Trump also ordered white house computers scrubbed clean of climate change data, LGBT issues, and several others which somehow offend his sense of reality.  At this point I have to wonder if he thinks deleting all that data makes it disappear from everywhere.  A preview of coming distractions.

Trump made a very big deal about photo ops of him signing various new executive orders, as if that alone made them into laws.  Has he so soon forgotten Obama's famous photo op of him signing the executive order to close Gitmo?  Eight long and disappointing years later: Obama is gone and Gitmo is still there.  Those staged photos are typical of Trump the showman who is so very fond of fake props; like all those blank folders on the press conference table allegedly "proving" that he had divested himself of his business empire when in fact he has not done that.  Smoke & mirrors. 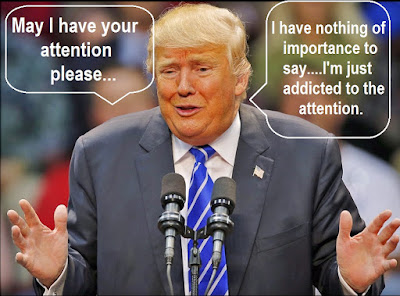 He did it again yesterday when he signed an executive order pulling America out of the TTP [trans pacific partnership] which is all well and fine, except America never signed onto or into the TTP, but that doesn't matter because now Trump can claim credit for it.  It's all about ego gratification with this one.  Every single thing comes down to glorifying him, as he recently put it "I am glad you all have the privilege of being privileged to support me."

One by one as they occurred during the campaign we scoffed at and then forgot all the red flags warning of a runaway ego we were seeing; despite how many of them there were, we ignored them, perhaps feeling he'd never get elected.  Guess what?  He not only got elected but a full week after the inauguration he is still whining and obsessing about how many people attended his swearing in; insisting there were a million and a half people in that crowd under sunny skies.  (it was raining, and @ 400,000 showed up).  Oddly, he never mentioned seeing the billowing black smoke of burning limousines six blocks away in the free speech zone. 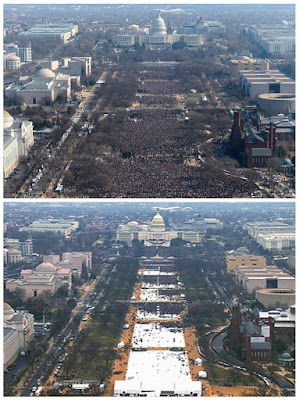 Maybe he can see the future and was actually looking at the women's March on Washington which occurred 24 hours after his swearing in, as well as in 30 other countries around the globe.  That was one impressive day of protest; and aides close to Trump the thin-skinned say he was furious after seeing videos of all the protests around the country, and planet.

Not only that, but despite 'yuge' evidence to the contrary, Trump continues to insist he only lost the popular vote because of 3 to 5 million zombie voters using their power to cast illegal votes for Clinton.  Hope it soothes her pain to know she had the zombie vote locked down.  Again and again we see his flashes of anger when challenged or contradicted on any issue.  Evidently being raised as the spoiled brat son of a tycoon taught Donald Trump very little about Breaking Free From Ego. 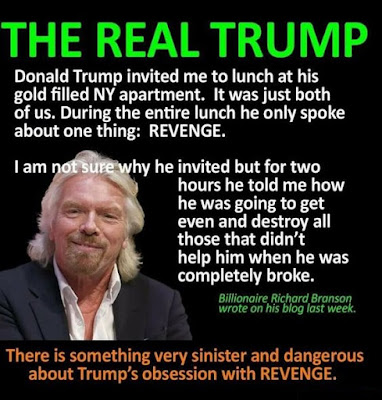 In the past Trump has said that a man without an ego is a loser, but he has to say that because his malignant ego won't allow him to acknowledge otherwise.  A healthy balanced ego is necessary to a wholesome healthy life, yet there is very little that is balanced about Trump's ego.  The out of control ego is a fear based creature who then totally operates from that core of fear.  It is indeed that very fear which motivates and drives Donald Trump to be the blustering egocentric self-absorbed narcissist that he is.

He boasts that his IQ is something like 155 or whatever, and we are forced to wonder if he is aware that if that was correct; it would put him in the top 1% of the worlds intellects.  Now I am sure he would just accept that as a natural fact, but it isn't even an alternative fact.  It's just plain absurd.  The word around the campfire is that Trump's famously fragile ego is an extension of his malignant narcissism.

Nearly everything he says comes back to shine light on Donald Trump.  His brittle and child-like ego is so oversized it must be fed constantly, and adoringly.  These personality traits we saw glimpses of during the campaign are living in the peoples house now; and that means that like it or not, we are all in his reality now, and had better get used to the new way of things or we might get blinked out into the cornfield by a powerful child, like in an old episode of the Twilight Zone.  Twilight Zone, pretty much sums up where we are now. 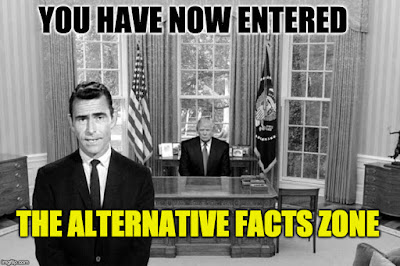 Have you noticed that Trump never answers questions with direct, specific or accurate replies?  That is so he can never be nailed down to anything concrete.  The other night when asked about who would pay for the wall; Trump said that Mexico would pay for it, "in a long complicated form."  What exactly does that mean?  He won't say.  He's slippery this one, but then we already knew that.

"Everyone is entitled to their own opinion but not their own facts."
As a nation we should be very concerned when within the same week Trump's PR team trotted out alternative facts, then he issues a gag order on the EPA, NASA, and other federal agencies, prohibiting them from talking either to congress or the press in any manner.  This isn't just illegal, it's absolutely, positively, totally wrong on every level.  This is Trump and his Nazi-loving ego turning America into a fascist state.  Simple as that!

In the same interview with David Muir we saw Trump do his slithering when asked about the conversation in the limousine with Obama on inauguration day.  Trump qualifies his answer by saying "Obama might disagree with my answer" as a subliminal way of telling us he is lying.  Sometimes I watch him, and listen to the things he says, and am convinced he is borderline delusional.  Behold his daily twitter rants about imaginary slights that he should be way too busy to deal with, but he puts feeding his giant ego before the affairs of state.

As already mentioned Trump sat thru several photo op sessions signing various sheets of paper, (this time with actual words on them) to show his supporters he was keeping his campaign promises.  Perhaps the most nebulous of these 'orders' and decrees is the one he signed authorizing construction of the wall, which he now says American taxpayers will pay for, with Mexico reimbursing us in some form some day.  How about we take a closer look at this proposed wall and what it will really cost to build it.  Trump has promised us a one thousand mile long southern border wall between 30 to 50 feet tall.

First off I would be remiss if I failed to mention here that for quite some time now the Mexicans Trump is so worried about have been using tunnels to cross the border at will 24/7 so I have serious doubts how effective a wall will be.

Some engineering professionals addressed the cost of the wall, and this is what they came up with. A wall 1000 miles long, 50 feet tall & 15 feet deep will cost 3.9 Billion dollars; per mile for a total of about 40 billion dollars!  For comparison, the annual budget for NASA is around 20 million.  Even if we suspended all aid to Mexico it still wouldn't be enough to pay for Trump's wall.  Currently the border patrol agency has about 200 million dollars in its coffers and Trump has ordered it to be spent on beginning the wall and adding thousands of new border patrol agents which will conflict with his new federal hiring freeze.  Which is it?  A federal hiring freeze or thousands of new border cops??  You cannot do both!  Americans will be forced to pay for the wall via a new 20% tax on goods and services which Trump favors.  Bet you haven't heard him brag about that, have you? 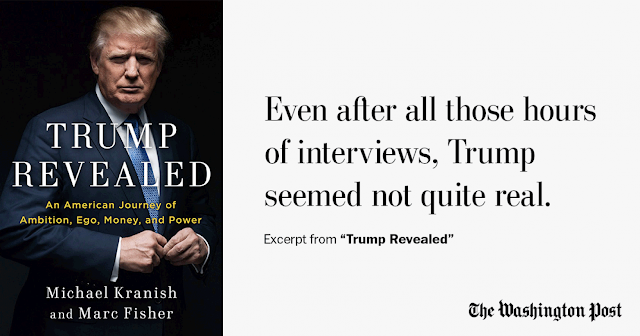 The proposed 15 foot depth of the wall is for structural integrity only and not intended to defeat tunneling efforts.  When El Chapo escaped from a Mexican maximum security prison, his people dug a one mile tunnel 50 feet deep right past all the prison defenses; so tell me more about how this wall will stop those determined to come here illegally.  Then we might want to visit with a fact before moving on; like the fact that over the last three years more Mexicans are leaving the United States than entering every year!  So, once again we must deduct the 'Trump embellishment factor' from the equation before getting anywhere near the truth.

Back to the subject of Trump's enormous ego, did you hear that he has issued a new decree that his inauguration day become "A day of patriotic devotion."  Devotion to what, Him?? The State? and oh yes he also wants to have missile parades as well.

He also recently said that he may have to send federal troops into Detroit to quell all the shootings.  He has even hinted that we may be going back into Iraq, and when asked why, he just said, "We should have taken the oil when we were there" which just happens to be a violation of international law.  As we have so frequently seen, Trump thinks he is above the law, worse yet he believes now that he IS the law.  Do these things remind you of how dictators operate? 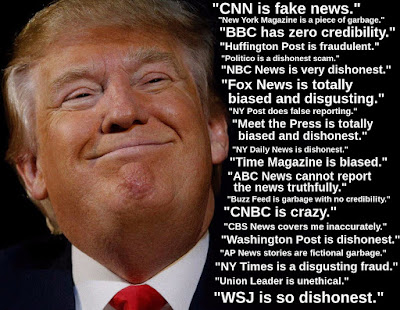