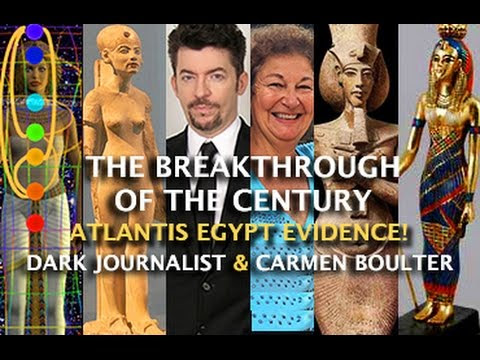 In this stunning Part Two episode with Ancient Egyptian Pyramid Expert Dr. Carmen Boulter she explains that her new and historic discoveries at a remote site in Turkey of an extensive collection of Ancient Egyptian artifacts reveal a connection to the Lost Continent of Atlantis. The evidence of an Atlantean Princess found among the ruins of the Secret Tomb opens up all kinds of questions for our dating of Ancient Egyptian as well as Atlantean history. As Dr.Boulter explains, 'this is history in the making and the stunning discovery will forever change the story of early humanity and the rise of civilization!'

Atlantis, often scorned by academics as a myth, was said by the Greek Philosopher Plato to have been an advanced culture located somewhere in the Atlantic that sank into the ocean due to its spiritual demise. Later, during the 20th century, the Sleeping Prophet Edgar Cayce predicted that ruins of this lost continent would rise in modern times near what is now Bimini off the Coast of Florida. When a huge structure known as the Bimini Wall was seen by researchers near Bimini in 1968 it sparked a new wave of interest in the reality of the legendary Atlantis that continues through to the present.

Excitement, Mystery, Controversy, Intrigue
A great deal of intrigue, controversy and excitement hangs over these amazing findings that were excavated in Turkey inside a concealed mountain vault tomb. Dr. Boulter is a leading expert on Ancient Egypt and her classic five-part Netflix series 'The Pyramid Code' changed the way we look at the level of technological and spiritual development in ancient times. Her deep involvement in this amazing find has not only given it great credibility, it has also resulted in rigorous scientific testing being done on these objects. The explosive initial results give an earth shattering date of 10,000 B.C. to these classically Dynastic Egyptian artifacts. That predates the historic Egypt by 8,000 years!

Atlantis Royal Family: Atlantean Princess
The groundbreaking discovery throws a completely new light on the age of the royal lineage of the Amarna ruling family. This royal lineage includes Akhenaten, Amenhotep, Nefertiti, Hatshepsut and Tutankhamen. With the discovery of an Atlantean Princess at the site with the Ancient Egyptian Amarna Artifacts, It raises all kinds of important questions about humanity's early history.

It strongly suggests that this unusual Amarna lineage may have been a Heritage of Blood transferred down from the Royal Adepts of Atlantis and is linked with legends of their advanced spiritual understanding and extraordinary psychic abilities.