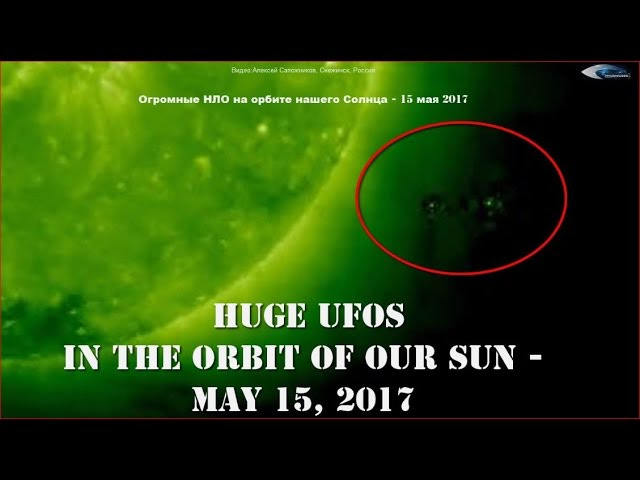 Published on May 15, 2017
Huge UFOs in the orbit of our Sun - May 15, 2017 Any of you can help this channel to acquire a large telescope and the opening of direct online access to space to anyone who wishes without interference from the government and scientists:

Published on May 15, 2017
I noticed a strange light in the field behind the gardenI started to camerate i for a moment, and I looked up and a new light-UFO flashed into the sky. Look at the original video without the Edit
What do you think about that?
Watch the video and judge for yourself.
Many people still doubt the existence of a flying saucers, but I tell you, just wait until they appear in large quantity. Around the entire planet will demonstrate their ability to fly, their appearance and disappearance. In a way that confuses people into the
large extent, that no one really understand what is happening. It has been written that the sky will "sign". This "sign" already seen a lot of people, but by the end of this age will see it every man of the earth and will be surprised"
Corpuscular ship is constructed in detail in accordance with the law of God in the form of light energy. Light corpuscular ship is therefore better as a spiritual power manifested corpuscular ships. The ship can move faster than light. When the object moves faster than light, disappearing from sight. Goes into another dimension.
The human eye sees everything that is inside of the light spectrum. When I mention the light spectrum and hit the light spectrum of the sun. With increased intensity of light would blind man. His senses would not notice a higher form of vibration. It can not therefore see the world resulting on a different frequency, although located around beside him. Corpuscular ship can move at high speed. It is therefore invisible to the human eye. By increasing the energy of the corpuscular vessel there is an increase of its speed. If it goes into the vessel by its frequency, it means that moves slower than the maximum speed. This makes it the human eye sees. It manifests itself in the form of light. Reducing the speed to changing light and the human eye, the ship must appear as a solid object. If the moving ship and if it stays on the molecular level, the maximum rate will remain invisible to the human eye. That they are explained in words that corpuscular ship may be the front door of your house and you will not see it. The ship can come to a man secretly. People of it may remain hidden from man.
The people of the corpuscular vessels reduces its frequency to a protein molecule in the cell become visible to the human eye. They therefore come secretly and suddenly appear before you in the form of light and energy. At that moment comes the light source, the energy in the form of spirit. You will be influenced by your spirit will be affected the most energy, which manifested itself around you and you will be allowed contact with corpuscular ships. In contact with them you should not worry. Believe me, it's something natural. There is nothing mysterious. Only one who manifests the spirit of mentally able to take this energy will be able to experience the transition from one age to another.

Published on May 15, 2017
Parallel universes. Multilateral dimensions. Games of imagination open to attractive fantastic hypothesis. The elements that are found in reality with the use of new technology the issue becomes a tangible thesis... and ceases to be a fun...

Published on May 15, 2017
SuspectSky features the best sightings, analysis, and thought-provoking research of the UFO phenomenon. Always critical, always vigilant. Send us your UFO, shadow person, or other strange activity footage and help us continue the search for truth and expose the real world we live in.

Check out our full length documentaries which dig deeper into the Visitor phenomenon and the social paradigm our civilization exists under. Through immersive footage and deep investigation, our full length documentaries enable the viewer to join us on an experiential journey, leaving them to form their own conclusions regarding the most profound and existential questions of our time - and of all time.

Since 2012 we have been piecing the puzzle together - we hope you'll subscribe and join us.