OUT OF MIND » TRUTH IN CONSPIRACY THEORIES? » HISTORIES MYSTERIES » "Flying Ship" Found Under The Great Pyramid? 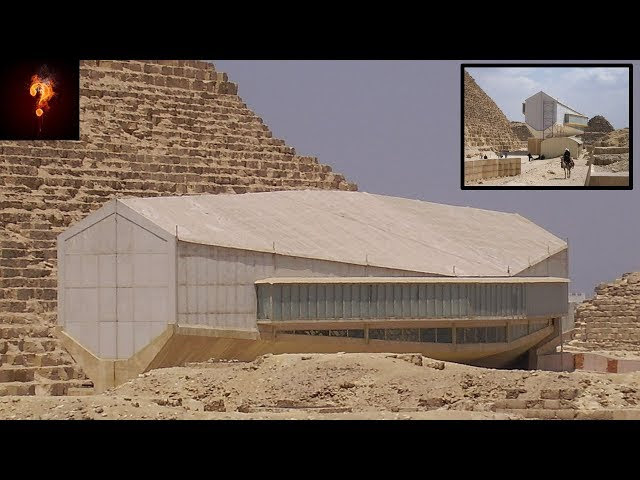 Published on Jun 11, 2017
The Solar Ship.
Many precious artefacts have been recovered within Egypt over the years, many ancient Egyptian tombs found intact, untouched for millennia, still containing the valuable items left for their kings, with the intention of their beloved pharaohs use, in their passage to the afterlife.
And with the mountains of gold and glistening jewels which have captured the attention, and the hearts, of those who have explored these ancient archives. Allot of the most astounding relics go largely unnoticed.
The Solar boat could be seen as a particularly good example of this mass overlooking of the most interesting of things.
At the foot of the great pyramid, once beneath several multi ton, precisely placed blocks of limestone, lay the Khufu ship.
A full sized Ancient Egyptian vessel, sealed into a pit over 4000 years ago.
Why is more not heard regarding this astonishing find?
Strongly believed to have been built for Khufu, King Cheops, who was the second pharaoh of the Fourth Dynasty of the Old Kingdom of Egypt.
The ship is now preserved in the Giza Solar boat museum built at the site in 1985, it is completely dedicated to the preservation the boat, possessing state of the art preservation technologies.
Khufu's ship is one of the oldest, largest, and best-preserved vessels from antiquity.
It measures 44 m long and 6 m wide.
It is also acknowledged as the world's oldest intact ship, and has been described by all in the now as "a masterpiece of woodcraft" it could sail today if put into water,
However, what is clearly the most amazing fact regarding the solar ship,,, the vessel was never intended to sail on water, the solar boat was built to sail through the air.
It was built largely of Lebanon cedar planking in the shell-first construction technique, using unpegged tenons of Christ's thorn.
The ship was built with a flat bottom composed of several planks, but no actual keel, with the planks and frames lashed together with Halfa grass,
The boat was found complete, but in pieces across the layers floor, laid in a logically disassembled order beneath the pyramid.
Subsequently reconstructed from the 1,224 pieces which were laid out in order over 4500 years prior.
It took several years for the boat to be painstakingly reassembled, primarily by the Egyptian Department of Antiquities chief restorer, Ahmed Youssef Moustafa.
Before reconstructing the boat, he had to gain enough experience on Ancient Egyptian boat-building. He studied the reliefs carved on walls and tombs, and many of the little wooden models of ships and boats found in tombs. Ahmed also visited the Nile boatyards of Old Cairo and Ma'adi and went to Alexandria, where wooden river boats were still being made.
It is now believed to have been known as a "solar barge", a ritual vessel to carry the king with the sun god Ra across the heavens. However, it bears some signs of having been used, a fact which has baffled many researchers, due to the ships only purpose being that of floating in the sky. it is possible that the ship was either a funerary "barge" used to carry the king's embalmed body from Memphis to Giza, or even that Khufu himself used it as a "pilgrimage ship" to visit holy places and that it was then buried for him to use in the afterlife.
Yet burning questions arise from such conclusions, firstly how would the ship fly? Secondly, if the ship was indeed intended to be used in king Khufus afterlife, why was it resting in pieces beneath the pyramid? and why did it show wear from use within the kings life?
Did this ship somehow, once possess the power of flight? did ancient Egyptians? We have been covering allot recently in regards to the compelling evidence left by the ancient Egyptians, revealing their advanced ability to traverse most of the earth prior to Columbus, is the solar ship a piece of this puzzle?
Kamal el-Mallakh who somehow predicted the existence of the ship, and has been attributed with its discovery in 1954, through his extensive personal research of the area, over a period of 14 years, initially found another pit also at the foot of the great pyramid.
Unfortunately, it seems this layer had been robbed shortly before he found it.
Archaeologists and Egyptologists alike, rejected his claims of some sort of ship having been within this empty cavern, yet when the other pit was found, which did indeed contain a ship his prior claim was vindicated, how did Kamal know?
He would later claim that he believed something rather special was stolen from that first cavern, could it have been the thing which made the ship work?
Regardless the other this caverns lost contents, the solar boat is certainly an amazing thing in its own right.

OUT OF MIND » TRUTH IN CONSPIRACY THEORIES? » HISTORIES MYSTERIES » "Flying Ship" Found Under The Great Pyramid?