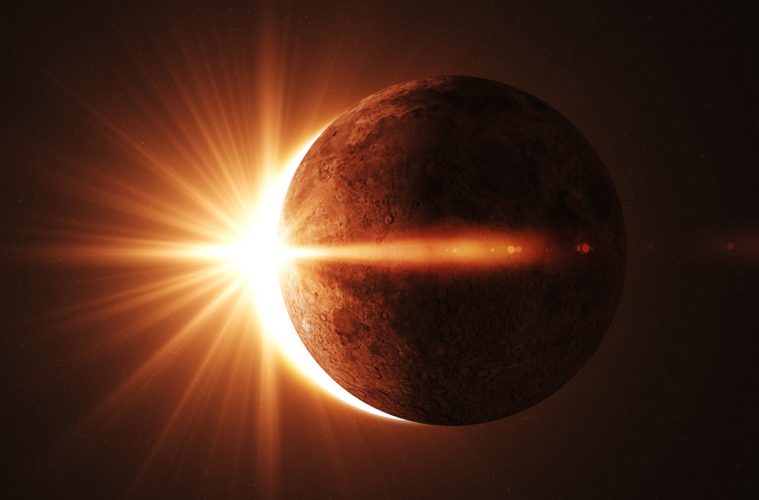 On August 21st, 2017, we will be experiencing one of the most powerful and significant total solar eclipses of our lifetime. Its path of totality goes right across the United States from coast to coast, starting from Oregon in the West to South Carolina in the East. This eclipse has been on the radar for both astronomers and astrologers for years and has been dubbed ‘The Great American Eclipse.’
Astrologically speaking, all eclipses have an effect on everybody on the planet, however, the location it travels over will experience it more potently. The effects of solar eclipses can start to be noticeable months prior and up to 6 months later, however, its influences and results have long term significance. I will be writing another article on this eclipse touching on more about what it means for us as individuals. This article is addressing its potential influence on geopolitical matters.

This Solar Eclipse Is In Leo Trine Uranus, With South Node in Aquarius

We have started to experience a series of both lunar and solar eclipses in the Leo-Aquarius polarity axis which initiated in February and will last until early 2019. Eclipses always occur when the New Moon or Full Moon is in close proximity to one of the two Lunar Nodes. The North Node of the Moon is in Leo which means there is new beginnings and a push towards this sign. The South Node is in Aquarius, which represents where endings are trying to be facilitated associated with that sign as well that are getting in the way of fulfilling the North Node in Leo. 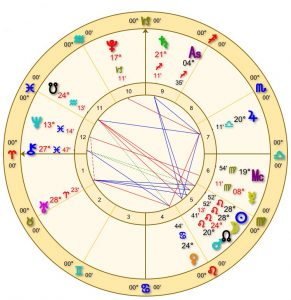 This upcoming ‘Great American Eclipse’ is near the North Node in Leo and because it’s also a New Moon, it really emphasizes the forward energies of the North Node. The Lunar Eclipse that occurs prior on August 7th in Aquarius near the South Node also emphasizes the ‘past’ energies wanting to be shifted.
Leo is the sign of the leader, the ‘king’, and the performer. When expressed negatively, it is dramatic, egoic and arrogant. Aquarius is associated with the group, collective ideology. Negatively expressed, it can overshadow the way an individual can shine in doing things their own way. When we look at what is happening politically, Donald Trump and his style of governance is representing the Leo energy while most of the other Western leaders/countries (which have been US allies) who are globalists represent the Aquarian side.
This Solar Eclipse is in a tight trine aspect with Uranus in Aries which gives this eclipse a theme of independence, separation, and freedom. Uranus is also associated with being unconventional and also rules technology and innovation.
One of the major reasons for Trump winning the election is because many US citizens have grown upset over globalist policies (Aquarian) that have costed the country a lot of money. For example, the US has been the largest contributor to NATO, the military alliance that protects Western Europe and North America. Also, the country has also been suffering financially due to trade imbalances with other nations.
Leo energy is more self-orientated, strong willed, wants to stand out from the crowd, and create its ‘kingdom.’ This combined with the Uranus influence mentioned above is exactly what we are seeing under the Trump-ruled United States. This energy is also somewhat connected Britain’s exit from the European Union as well which is currently underway.
Saturn is also in a loose trine with this eclipse and Uranus. Saturn has been in Sagittarius for the last few years. Sagittarius rules countries and Saturn is a restricting and redefining influence which is why we have been seeing conflicts around immigrants and refugees coming into Western countries and Trump’s muslim ban.

The star regulus is one of the major stars observed by astrologers. It is the ‘heart of the Lion’ in the Leo constellation and is associated with leaders, rulers, and traditionally being referred to as the ‘star of kings.’ Donald Trump was born when Regulus was rising, which is also aligned with his Mars which traditionally is associated with strong military leaders.
An important thing to mention is that when there is a total solar eclipse, the Moon completely cuts off the light of the Sun. Traditionally, when there would be an eclipse like this aligned with Regulus or a similar type of star, it could mean a significant change regarding a leader or ‘king’, and in some cases a downfall or symbolic death.

The last time we had a solar eclipse aligned with Regulus was in 1998, which was also conjunct then President Bill Clinton’s Sun sign. At that time Bill Clinton admitted to having sexual relations with Monica Lewinsky and his impeachment process was underway in the months following. This echoes what is currently currently going on with lots of talk around impeaching Donald Trump. 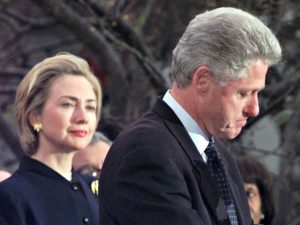 The ‘Great American Eclipse’ is also part of a series of connected eclipses, called Saros Series 145. The years that these eclipses take place usually correlate with the fall of a leader. John F Kennedy was assassinated, Franklin Roosevelt died, a Russian Prime Minister was fired, and the downfall of former Yugoslavian/Serbian President Slobodan Milošević occurred under ‘Saros Series 145’. There were also assassination attempts on Ronald Reagan and William Taft during these eclipse years and even John F. Kennedy’s son died in a plane crash.
Uranus will also be making a tough square to Donald Trump’s career ruling planet which could also indicate potential impeachment or other major disruptions or changes around his role of President. Also, considering that his Mars is being activated this indicates that he may go to ‘war,’ either domestically with the people trying to bring him down and/or perhaps even with another country. Saturn and Uranus are also in a trine with Mars that is loosely aligned with this eclipse. This could also indicate some sort of military action or upgrade.

The interesting thing about this eclipse is how its pathway literally draws a line over the United States from one corner to the other. Symbolically this could represent the sharp division between the US citizens that has been brewing since the rise of Trump. In October 2016, I personally predicted that Trump was going to win the election because of this ‘dividing pathway’ while also considering the alignment with his chart and Regulus. 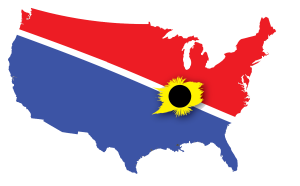 Perhaps when we consider all of this so far, it is very possible that an attempted impeachment of Trump could trigger further domestic turmoil both in Washington and amongst US citizens across the country. Trump supporters would likely revolt towards the political establishment which could potentially lead to civil unrest that could potentially escalate into a civil war.

The Connection With Pluto In Capricorn

Pluto has been in Capricorn since 2008 and will stay there until 2024. Pluto is the planet of secrets, power, manipulation, as well as transformation, death and rebirth. Capricorn is associated with government as well things like business and banking. Therefore to put it simply, this is a period in which government structures and the hierarchy of the geopolitical arena will continue to have problems, which will ultimately help to initiate major changes set to develop over time beyond 2024. 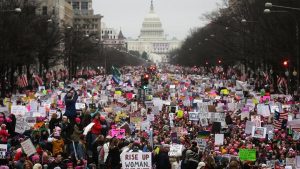 The last time Pluto was in Capricorn was from 1762-1778 and at the end of that time period the US Declaration Of Independence was signed and the US was birthed. All of this occurred during the American Revolutionary War in which the colonies were in a battle with an oppressive and troubled Britain. This period marked significant new beginnings as the US would eventually become the leading country of the world, taking Britain’s place.
However, with this edition of Pluto in Capricorn, the US is now the troubled and oppressive power. Over the years since it started, a lot of disappointing secrets have been revealed due to Wikileaks, Edward Snowden, and the rise of conspiracy related media platforms. This has created a dissatisfied population which led to the election of Trump. However, as Pluto’s influence is growing stronger, Trump also represents the ‘abuse of power’ qualities of Pluto as well.

Saturn Entering Capricorn In December, Another ‘American Eclipse’ in 2024

Over the next 7-8 years, there will continue to be a lot of turmoil in the US, which will ultimately lead to greater new beginnings which will have both a domestic and global impact. This eclipse, which strongly influences the next 6 months, is triggering this energy. During this 6 month window of time, Saturn will enter Capricorn on December 21st (winter solstice) and will stay there for approximately 3 years. 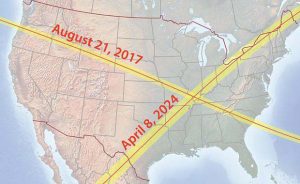 This will amplify Pluto’s energies mentioned above and reflect further problems for government and banks. This could manifest as a major recession and economic downfall which may even start earlier then December, building up slowly after Saturn ends its retrograde on August 25th.
On April 8th, 2024, there will be another total solar Eclipse travelling over the US. This is the same year that Pluto ends its passage through Capricorn and it will also coincide with other astrological aspects/cycles that suggest this will be the period in which the new beginnings will start to take place.
The way I see it, this ‘Great American Eclipse’ marks the beginning of a 6-7 year window of major changes and will conclude around the time of the next Solar Eclipse travelling over the US on April 8th, 2024. A lot of changes are underway, not just in government, but also 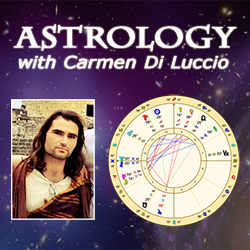 regarding banking, currencies, and the way business is done. I suggest reading my article which further covers Pluto in Capricorn to get a better idea of what to expect.
Thanks to: http://www.collective-evolution.com
and: http://www.earth-heal.com