Dr. Steve Greer Update: Beyond Where He Has Ever Gone Before – Carol Rosin Show 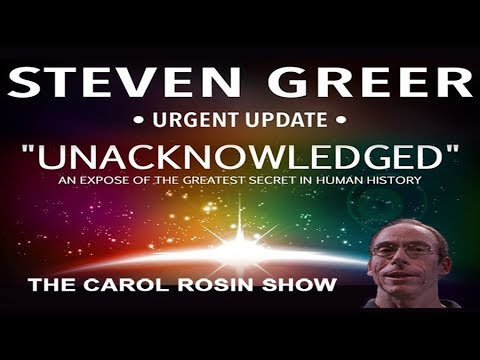 Dr. Steve Greer Update: Beyond Where He Has Ever Gone Before – Carol Rosin Show

In this unprecedented interview with longtime friend Carol Rosin, Dr. Steven Greer provides an information-dense update on Unacknowledged Special Access Projects, as well as a three part “To-Do list”.
He describes projects involving UFOs as the “crown jewel” of compartmentalized secret government information, more classified than the development of nuclear weapons, such that often US Presidents are not apprised of these facts. He says the way humankind chooses to deal with the reality of extraterrestrial contact and with their advice about renouncing nuclear power will be the deciding factors of our planetary fate.
He describes what’s happening, up-to-the-minute regarding UFOs and he names the names of key officials from the past who set us on the path we’re on today.
Here’s an interesting snippet: “There are two pathways that joined each other in the 1940s and ’50s. The first pathway was what was going on with very human scientists who were doing experiments with very high voltage electromagnetic systems that would create a vector into the fabric of spacetime. It’s been called the zero point energy field, which is the baseline energy field that all of space, time and matter are fluxing in and out of…everyone from Nikola Tesla to T. Townsend Brown, whose work became the foundation of the Rand corporation were doing experiments with this.
“T. Townsend Brown, for example in the late 1920s was doing experiments with certain crystalline materials and metallic materials with voltages going in that would cause mass cancellations – and things could then levitate. Now, this has been popularized and called ‘antigravity’. It’s not antigravity…[It] creates a change in the angular momentum at a subatomic level, where the mass…of an object approaches zero…it becomes lighter than air…velocity is inversely proportional to the mass…the lower the mass, the faster something can go and these experiments were being done in the 1920s. The United States Government took an interest in this and those Black Budget projects were going on during the ’30s and during WWII.” Similar projects were being done in Germany (aka the Nazi Bell).
This latest briefing by Dr. Greer situates the issue of UFOs within today’s concerns about the environment, the economy, politics, technology, society, culture, spirituality and psychology. Greer goes beyond disclosure, with solutions to correct the current extinction process, announcing a concise action plan toward an ideal yet realistic near-term future that can come true with these specific steps. Greer advises listeners about what can and must be done locally, nationally, globally – and from the standpoint of cosmic unity consciousness – and why.