OUT OF MIND » PRAISE THE CASH! - ARCHIVES OF THOSE THAT USE THE INTERNET TO PUSH FORTH THEIR MADE UP BULLSHIT FOR DONATIONS AND EASY LIVING » BENJAMIN bla bla bla FULFORD »  Benjamin Fulford ~ 11/06/2017

Posts : 2620
Join date : 2012-01-17
Age : 74
Location : NH
Actually Purps I had been waiting for you to chime in on this, but decided to just go with it. If it must continue, sticking it in one obscure place would be more preferable.
The pic works fine, you can call the thread "The Bashing Ring"...

Admin
Posts : 107626
Join date : 2012-01-04
Location : Woodstock Nation
Marty I know... I should have dealt with this way earlier but I have been hoping this would just stop. I see the error in this and YES to the Bashing Ring! How appropriate!
Why these guys can not grasp the divide and conquer modality is really a mystery though. One would think that if one found their way to this site they would be more hip to the real crux of the issues that they complain so about.

Posts : 2620
Join date : 2012-01-17
Age : 74
Location : NH
Right ?  We've not had this issue in some time now and I really thought for the most part this group/family was past this kinda thing, but it only takes certain buttons to be pushed I guess...
I've said my peace in the most diplomatic way I could, I will support whatever you wish to do.

Posts : 2620
Join date : 2012-01-17
Age : 74
Location : NH
No problem William, we've all been there and still do on occasion. It can be difficult to recognize that point when your just beating your head against the wall. The trick of course is your response when you do realize it.

Admin
Posts : 107626
Join date : 2012-01-04
Location : Woodstock Nation
no apologies needed William.
But the question remains should I create a new forum for Ave & micro and the rest that care to use verbal punches on many threads or not??
I am serious on this and wish to accommodate the members here in almost every way I possibly can.
If I did this would they then not place the inappropriate comments in other threads that are not only totally off topic in most cases but also rife with name calling and insults and actually use the forum??
That is the question....

Posts : 486
Join date : 2017-05-11
You just want to indulge in your far-right echo chamber. When people show up who mock your paranoid unified conspiracy theories you all get butt hurt. You all love to be vile and divisive yet fool yourselves into thinking that you are above "divide and conquer."

Posts : 3470
Join date : 2012-02-10
Age : 66
Location : Florida
You know, Avebummer, I'm getting tired of the constant friction here because someone's opinion pisses off somebody else, and if this shit keeps up, you're gonna get my opinion, and you aren't going to like it, LAY OFF-If I wanted to hear a wounded person cry, I'd got to the LGBTQ Memorial in Orlando-Jesus Crist-

Posts : 486
Join date : 2017-05-11
You constantly link posts by breitbart, yournewswire and other far-right sites yet consider yourself to be "above politics?" Just admit what you are and drop the charade of non-partisanship.

Admin
Posts : 107626
Join date : 2012-01-04
Location : Woodstock Nation
LOL Ave now you know I am of no political "side" and I loath the ENTIRE political setup of this country. You just like to cause trouble and most here are well aware of this. Why is this?
Also yes... I do post the occasional articles from ynw etc. just as I post from many other so called alternative sites. So what is your point? 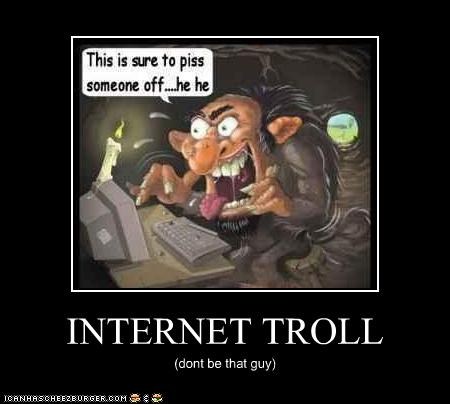 Was just settling in to watch the girls in bikinis in a pool of jelly or mud and read some of the older posts.....was left with this "vision"

Posts : 486
Join date : 2017-05-11
My friend had his health insurance premium DOUBLE since tRump became president. But paranoid fools think that a childish, foul-mouthed man child is going to play "4D chess."
The "cabal" are elitist, greedy, sexually perverse megalomaniacs that only an elitist, greedy, sexually perverse megalomaniac (tRump) could overthrow! Now that is retarded logic!

Avebury wrote:My friend had his health insurance premium DOUBLE since tRump became president. But paranoid fools think that a childish, foul-mouthed man child is going to play "4D chess."
The "cabal" are elitist, greedy, sexually perverse megalomaniacs that only an elitist, greedy, sexually perverse megalomaniac (tRump) could overthrow! Now that is retarded logic!

Which one is you?

Posts : 486
Join date : 2017-05-11
I'm the guy calling you all out on your nonsense.
Hold your tiki torch high while you chant "blood and soil!"
P.S. How is Melania doing with eradicating on-line bullying? She should probably start with her "husband."

Avebury wrote:I'm the guy calling you all out on your nonsense.

Please do direct me to the nonsense you are calling me out with personally, I seem to have become all dizzy and forgetful with the tantrums going on

Posts : 398
Join date : 2017-04-21
Thanks Purps and Marty for understanding my gut reaction. Probably a good idea to start a separate post so little avebury can post his/her/it's heart out but because he/she/it is little more than an angry troll it will probably infect other posts but at least we can ignore it for a while.

Hey Ave buddy, I've decided to not post articles where people are merely accused of sexual misconduct. In my world you're innocent until proven guilty. This is evidently not true in yours. How many dems have admitted that the accusations are true?

Did that last video cheer you up? Here's another I think you'll like.

Posts : 2620
Join date : 2012-01-17
Age : 74
Location : NH
I'm sure Avebury has a plethora of material just to push buttons, as he has said, that's what he gets off on. This would not necessarily be a bad thing if in fact he/she were raising specific points and/or perspectives that could validate and support whatever his/her position is. Unfortunately that doesn't seem to be the intent. As nothing of any sense or relevance is offered in rebuttal other than insults and accusations and complaints about others, it's clear the sole purpose is simply to stir the pot and create as much discontent as possible. On that note Avebury I commend you for doing an excellent job albeit counter productive. As for the specified thread proposed by Purps, I doubt it would do any good and even if it were used I know it's not the type of energy she wants on this site.
I basically see two options: 1) the obvious which is say good bye to Avebury, or 2) Ignore him, If the button pushing doesn't get the desired result, it likely won't last.
Though #1 may be desirably for some, I would reserve that as a last resort in that we have for some time been able to carry on conversations with opposing perspectives and both sides hopefully have grown and learned. Not always, but the banter can be done with respect and humor and if necessary agree to disagree. I sincerely hope we can continue this practice.

Admin
Posts : 107626
Join date : 2012-01-04
Location : Woodstock Nation
Absolutely Marty! As usual you are wise and caring in your perspective and I value you more than I can say! You are a true gentleman in all respects.
And let's also remember that when I have to eliminate a member they come back over and over. I think that is counterproductive and a huge waste of what little time I have these days.
Unfortunately Avebury likes to run off others that used to enjoy sharing their work and videos here and this kind of thread is a deterrent for new members to want to make comments.
But I guess that is one of the pitfalls in having a forum verses a read only blog and allowing members to post and make comments. You have to deal with all kinds. It is a shame though after the many years of work spent here by myself and others to have these articles brought so far off topic and in such a ridiculous manner. But maybe that is the agenda...

Posts : 398
Join date : 2017-04-21
For what it's worth the avebury's of the world are a minor distraction that by far undershadow the good work this site does.
I have learned so much here from you Purps, Marty and others that the annoyance of avebury is like getting a paper cut while reading Shakespear. Well worth the price of admission.
Also you have allowed me to express the depression and at the same time wonderment of losing and than communicating with the love of my life.
Thank you......is undershadow a word?

PurpleSkyz wrote:LOL Ave now you know I am of no political "side" and I loath the ENTIRE political setup of this country. You just like to cause trouble and most here are well aware of this. Why is this?
Also yes... I do post the occasional articles from ynw etc. just as I post from many other so called alternative sites. So what is your point?

Posts : 2620
Join date : 2012-01-17
Age : 74
Location : NH
You see folks we can and DO learn from each other. It's a journey that is best when shared, and so by continuing to gather more and more input from each other (yes, even Avebury), we can grow and hopefully overcome the divisions and conflicts, the judgements and things that have been used for far too long to separate us.
I truly hope that those who have only recently joined us here and also those who have been lurking in the shadows, will jump in and share your thoughts 'cause this is how we learn. I'm not saying you wont get jumped on or criticized, but that exchange of ideas and perspectives helps open our minds to new horizons.
It probably should be stated somewhere that a sense of humor and a thick skin are highly recommended attributes for anyone joining this family. I can also tell you that the previous pages of comments on this thread are NOT typically the norm. We are blessed with a very diverse and unique group to have come together not to mention an absolutely Stellar Admin (Purps) who is responsible for providing this awesome platform for us to share.

OUT OF MIND » PRAISE THE CASH! - ARCHIVES OF THOSE THAT USE THE INTERNET TO PUSH FORTH THEIR MADE UP BULLSHIT FOR DONATIONS AND EASY LIVING » BENJAMIN bla bla bla FULFORD »  Benjamin Fulford ~ 11/06/2017