One economic theory has been repeated so often for so long in this country that it has become an accepted fact:

Most Americans have gotten so used to hearing this theory that they don’t even question it anymore.

One of our two Presidential candidates is so convinced of the theory
that he has built his entire economic plan around it–despite the huge
negative impact additional tax cuts would likely have on our debt and
deficit.

But is the theory true? Do tax cuts really spur growth?

The answer appears to be “no.”

According to a new study by the Congressional Research Service (non-partisan), there’s no evidence that tax cuts spur growth.

In fact, although correlation is not causation, when you compare
economic growth in periods with declining tax rates versus periods with
high tax rates, there seems to be evidence that tax cuts might hurt growth. But we’ll leave that possibility for another day.

Before we go to the charts, a few observations.

First, this topic has become highly politicized, so it’s impossible
to discuss it without people howling that you’re just rooting for a
particular political team. Second, no one likes paying taxes. Third,
everyone would like a tax cut, including me.

So I think we can all agree that everyone would prefer that tax cuts actually did spur economic growth.

Okay, first let’s look at the top marginal tax rates for the past 60
years or so. These are not effective or average tax rates–they’re just
the top marginal rates. As you can see, they’ve trended steadily down: 
And now, average tax rates for the country’s highest earners–the
super-rich 0.1% of incomes. These have also trended steadily down: 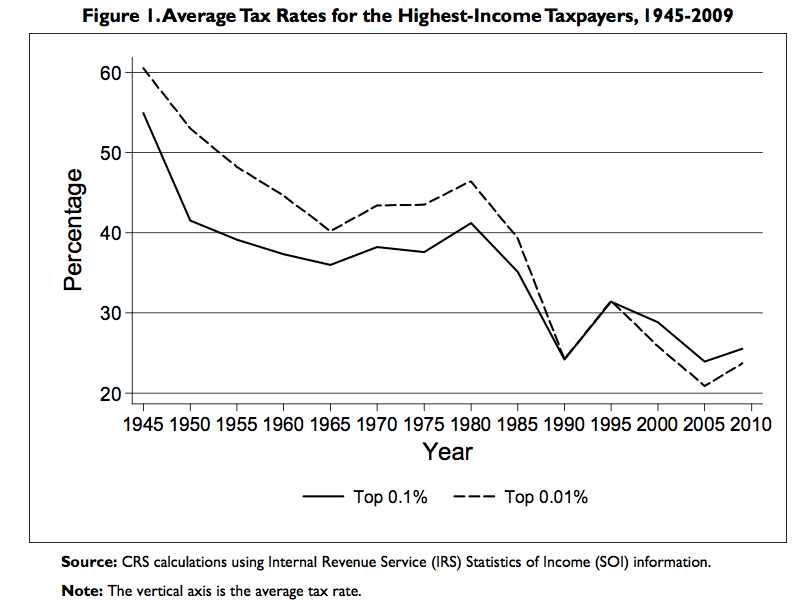 
So, have these declining tax cuts for the rich–the “job creators” who
are being given a bigger incentive to invest by the reduced tax
rates–led to faster economic growth?

The following charts show the correlation between tax rates and
economic growth over the periods above. The slope of the solid line in
each chart is the key.

The lefthand chart shows that there is no correlation between GDP growth and the top marginal tax rates. The righthand chart shows that there might be a very modest tendency toward faster economic growth with higher capital gains rates.
(But those who love today’s record-low capital gains rates will be
relieved to know that the CRS does not find this correlation to be
statistically significant.) 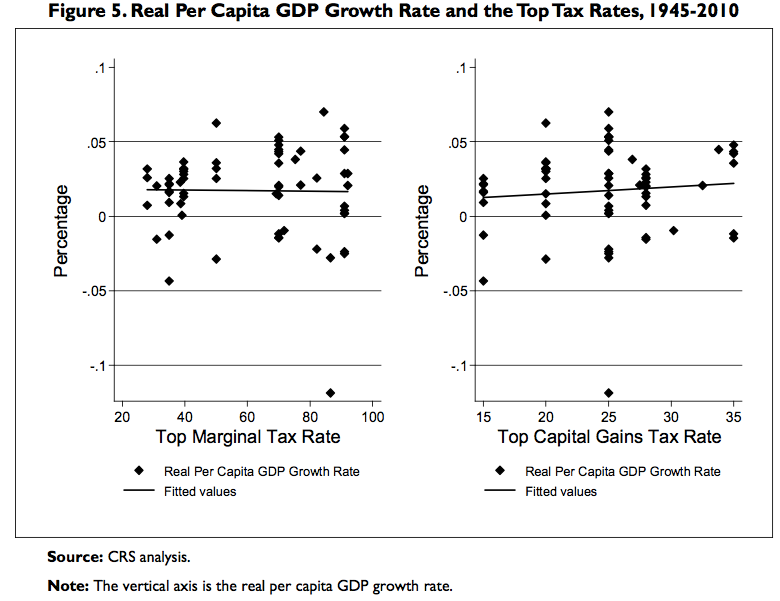 
Along these lines, David Leonhardt of the New York Times recently
put together a cool chart showing economic growth rates following
periods of tax increases and tax cuts. The chart plots the average future 5-year
economic growth rate from each point in time, which is known with the
benefit of hindsight. You can see for yourself why Leonhardt (and any
other sentient being) would conclude that the evidence does not support
the idea that tax cuts spur growth.

(By the way, Leonhardt showed this chart to Republican VP nominee Paul Ryan, who, like Presidential nominee Mitt Romney,
wants to stimulate the economy by cutting taxes. Ryan’s reaction?
“Correlation is not causation.” That’s true. But the point is that
there’s not even any correlation suggesting that tax cuts spur growth. It’s just a theory. And it’s a theory that a lot of real world “correlation” suggests might be wrong.)

And now for the really bad news…

Although tax cuts do not appear to spur economic growth, they DO appear to lead to greater economic inequality.

As this chart shows, inequality in the United States recently hit a
level that has not been seen since the 1920s: The country’s top earners
are taking home more of the national income than at any time in 70
years. 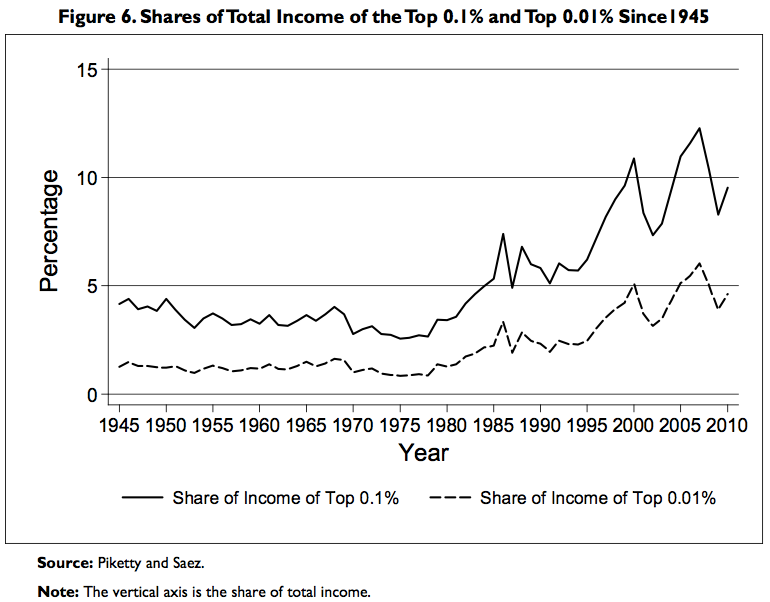 
And now let’s look at the correlation between this rise in inequality
and tax rates. As you can see, the lower the top marginal rates go
(left), the bigger the share of national income that goes to the top
0.1% of wage earners. And it’s the same for capital gains rates. 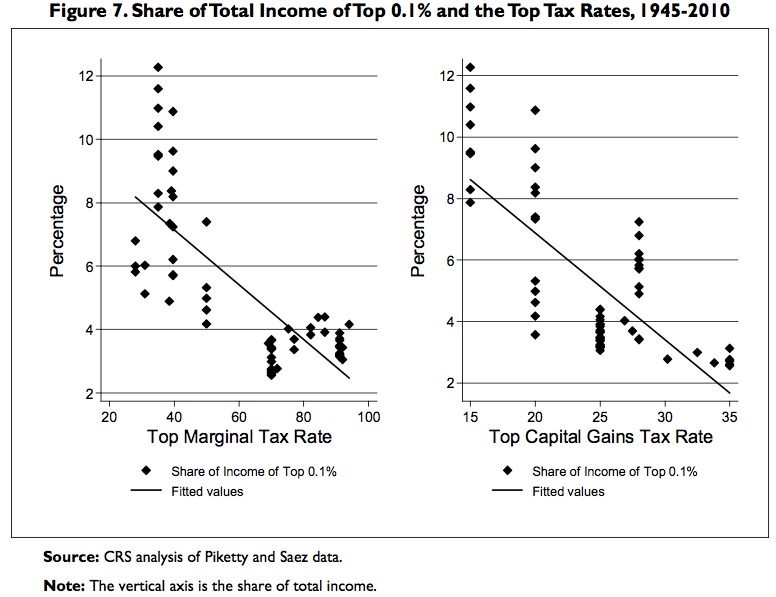 
Meanwhile, the share of national income that goes to “labor”–a.k.a., most Americans–goes up as the top tax rates increase. 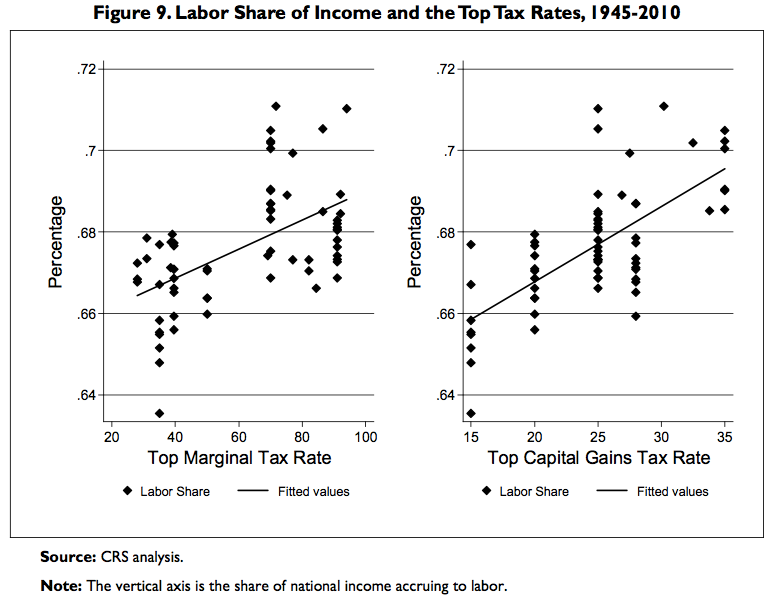 
Why is the rise in inequality so troubling? Well, beyond the issues
of fairness and stability, increasing inequality is hurting the economy.
Unlike middle class and upper middle class folks the country’s highest
earners don’t spend all the money they earn. So this money doesn’t get
circulated back into the economy, where it can become revenue for other
companies and salaries for other workers. (If there were a dearth of
investment capital, the money might get invested, but we’ve got plenty
of investment capital right now. Our problem is a lack of demand).

So, what’s the bottom line?

Well, the bottom line appears to be that low taxes do not spur economic growth and DO cause greater economic inequality.

So, although it sounds like heresy, presidents and Congress-people
who actually want to fix the economy might want to consider raising
taxes rather than cutting them. Or, at the very least, keeping them the
same.

SEE ALSO: EXCLUSIVE: The Romney Plan Will Balloon The Debt And Deficit

I embrace Ron Paul's ideas of taxation: do away with it completely (Federal). There are other, Constitutional ways to fund a LIMITED government, freeing and allowing the people to keep their money and invest as they see fit. States will continue to tax, and they can implement necessary "safety nets" if the people want them, but a government that steals money from someone whose earned it to redistribute it to others is a thief. People should give freely and willingly, not under compulsion or the heavy handed arm of the government. ;-)