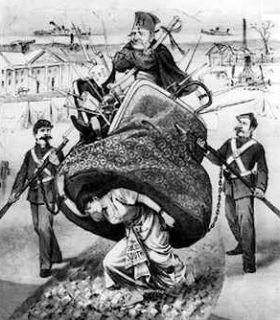 The Reconstruction Act of 1868
is misleading because it actually dealt with reconstructing the order
of governmental power and redefining the military’s purpose and
authority within The Virginia Company – a fraud masquerading as The
United States of America.

Yes, President Andrew Jackson vetoed this act. However, presidential
vetoes can be defeated by a two-thirds Congressional majority vote and
Jackson’s veto was subsequently defeated.

Before this Act was passed we the citizens controlled the government.
Subsequent to passage of this Act states and state officials became
sub-federal and subordinate to the federal government. Any and all who
refused federal control could be treated as belligerents and subject to
the Confiscation Act.

Most employees of local, county or state governments do not realize
they are, in fact, federal employees pursuant to the Reconstruction Act
and the 13th, 14th and 15th amendments. In point of fact it is the
Reconstruction Act that authorizes an FBI agent to take an investigation
away from a local police department.

All sovereign American citizens resident within the Republic of
States were suddenly and falsely expatriated from their sovereign
American status without their knowledge or consent.
Their labor, souls, children, property, sweat equity and credit became
the financial collateral for the public debt which was converted into a
Public Trust scripted after the ancient Roman Trusts. To enforce this
expatriation of American citizenry USC Title 50 – the Trading with the Enemy Act
– was passed in 1917. This act brazenly defines American citizens as
“an enemy of their government” and is empowered by Congress and the
President via the annual renewal of Lincoln’s Declaration of War.

The Federal Reserve Act of 1913


The Federal Reserve Act
was designed and written by a German national named Paul Warburg.
Warburg entered the United States in 1903 through Ellis Island in New
York. He was a Sabbatean German Jewish banker and CFO of the
Rothschild Banking empire. Warburg’s assignment was to craft a piece of
legislation designed to control the finances of the United States
corporation from Europe.

The Great Depression of 1929 (like so many other catastrophes before
and after this date) was actually a staged event concocted by the
Rothschild and Rockefeller banking empires, the Queen and British
Parliament, the US President and Congress, the Vatican, and numerous
elite families. It was engineered to steal America’s gold and silver
reserves and replace them with script money. The theft was ingenious.
By allowing the public to fall on hard times the public began to demand
the government fix the problem by any means necessary. The banksters
were only too happy to oblige.

While everyone in this country struggled to survive President
Roosevelt and the Congress were making interest-bearing loans to foreign
governments using the very money they publicly swore did not exist.
Germany used that money to enlarge its war chest. The
functionally-illiterate American public was so self-involved in its own
personal fate it never considered how it was possible that government
officials never lost a dime during the Great Depression. How, in fact,
they all continued to enjoy their family estates and personal wealth
while the bulk of the citizenry suffered significant economic hardship.


On March 9, 1933 the 73rd Congress voted the Emergency Banking Act (House Joint Resolution No. 192-10)
into law. This Act declared the Treasury of the United States bankrupt
despite the fact the U. S. Treasury had been secretly closed by
Congress in 1921 (12 years earlier). The Emergency Banking Act
abrogated America’s gold standard and hypothecated all property within
the United States to the Board of Governors of the Federal Reserve
Bank. Now, to hypothecate is to pledge personal property as security
for a debt without transferring possession or title.

The Trading With The Enemy Act was modified in 1933 by Roosevelt
under the Emergency Banking Act so that Americans couldn’t easily see or
locate it. In this modified version Americans were declared the enemy
of the government.

Following the 1933 bankruptcy, most American’s were not aware that HR
1491 or HR 4960 had been secretly passed, wherein the US Congress
actually relinquished our right to have or accumulate gold and silver.
The Congress eventually repealed part of this legislation to accommodate
jewelers but all Americans are still prohibited from having or
accumulating solid gold and silver. Hence, our coins are no longer
solid gold or silver but are tin and nickel plated, carbon filled
coins. Pennies are tin and copper plated carbon filled coins. These
Acts also established the requirement of licensing and then with the
enactment of ‘The Trading with the Enemy Act’ under War and National
Defense, the Confiscation Act, the Reconstruction Act and the Lieber
Code were all tied together to create the secret fascist government of
the United States.


License ~ The word ‘license’ is defined in all
modern law dictionaries as “A permit to do something unlawful.” Now
think about that and consider all the licenses you currently hold.
These licenses are civil contracts issued to you by the government
giving you permission to do something that is held to be unlawful.

Travel ~ Your right to travel is an unalienable
right defined by the Declaration of Independence and not a privilege.
Yet the government demands that you apply for a driver’s license. If
you research online the phrase “Right to travel” you will uncover
numerous old Court rulings that cite your right to travel without a
license. Of course since 1938 the modern lawless court system refuses
to honor these original precedents of law citing instead a Supreme Court
case titled Erie Railroad v. Tompkins, 304 US 64 (1938).

Volunteerism ~ When citizens voluntarily (or
involuntarily) enter Military Courts of Justice they will frequently
hear the prosecutor or defense lawyer argue that ‘Your comment or
actions are a belligerent response’[or]‘You are being combative.’ Lawyers will even attempt to provoke you or your witness’ anger just so you or they behave belligerently toward them and provide them with the right to levy fines against you.

States Of Emergency ~ Regulation 840-10 of the
Military Code, sections of the Administrative Procedures Act and the
presence of the Military (gold-fringed) flag on display in the courtroom
instantly create a state of emergency.
What this means is the moment a police officer stopped you from the
exercise of your right to life, liberty and the pursuit of happiness the
police officer became a belligerent. He is armed and you’re not! He
displays a military rank and you’re a civilian and he has now delivered
you into a Military Court of Justice with the intent to ‘pillage and
plunder’ within the Admiralty jurisdiction of that Military Court. The
right to ‘pillage and plunder’ is also known as ‘The Law of Prize and
Captured Property’ and is defined under Title 10, sections 7651 to 7681
of the Code of Military Justice, March 25, 1862.

Public Trust Funds ~ Section 2 of the Lieber Code instructs that ‘A victorious army seizes all money and movable property and holds it in trust.’
This is exactly what the corporate United States government and State
governments did and continue to do because they now perceive themselves
to be ‘a victorious army.’

But they ran into a problem. The corporate Congress, corporate
Military government and courts of justice discovered they could not gain
access to those Public Trusts created using birth registration forms,
social security registration forms, licenses, personal property, deeds,
promissory notes, equity and credit, and deposited into the Federal
Reserve System without including individual persons
into the bankruptcy of the United States Treasury of 1933. So they
cleverly denied personal sovereignty and converted persons into an
appellation – a corporate fiction or strawman – and identified these by
writing birth names in capital letters. All licenses and documents
reflect this appellation. The all-caps name
can be researched in every State Code under ‘corporations:’ [e.g.] see
the Texas Administrative Code under ‘corporations’, Chapter 79.31,
subtitled: entities; [also] the all-caps name is specified in the United States Government- Style Manual under the section titled [identifying corporations].

Public Trusts are not a new concept. The concept and strategy was
copied from the ancient Roman empire and its use of Roman trusts. The
ancient Roman trusts declared all citizens dead after Rome was burned (a
staged event) and until Roman citizens served notice upon the Roman
Senate that they were in fact alive and capable of managing their own estates theywere
presumed dead. This then allowed the Roman Senate to become Trustee
over every estate and to use them as they deemed appropriate.

Money Buys Freedom From The Corporate State ~ You
can buy your freedom for a price of $600,000 dollars through the
Department of State. This is the price charged to procure American
diplomatic immunity pursuant to international law. Of interest, in all
other countries this same immunity can be purchased for $95,000, which
is honored in most countries with the exception of The United States,
Canada and the United Kingdom.

Limitations Of Corporate Law ~ What most Americans
don’t realize is no corporation can operate or fund itself. Corporations
require human beings, human credit and sweat equity to finance and
operate them. Therefore, everything that the government claims to own
actually belongs to “We the Public” and not the them. Everything they
have been doing is one gigantic fraud and all of it at our expense!

The Fee Simple Deed ~ This gives the state your home
and the right to tax you into poverty as a tenant. The Patriot Act goes
further in that it eliminates the need for search warrants before
entering your home.

Alloidal Deed ~ When deeds are Allodial no one can
trespass on your property, not even the government. No one could tax
your property and no bank could foreclose on your property. No bank
would ever loan you money against your property either. You were
sovereign ruler of your land and home. This, sad to say, is no longer
the case.