OUT OF MIND » TRUTH IN CONSPIRACY THEORIES? » HISTORIES MYSTERIES » The Enigma Of The Phaistos Disk, A 3,700-Year-Old Indecipherable Message

The Enigma Of The Phaistos Disk, A 3,700-Year-Old Indecipherable Message

The Enigma Of The Phaistos Disk, A 3,700-Year-Old Indecipherable Message


The 2nd millennium BC is a period that spanned the years 2000 through 1001 BC and was marked by the appearance of great kingdoms and empires across the planet. The period marks the transition from the Middle to the Late Bronze Age.
Experts maintain that the first half of the 2nd millennium BC was noted by the domination of the Middle Kingdom of Egypt and Babylonia. During this time, scholars say that alphabet started developing.
However, the 2nd millennium BC also marked the appearance of Chariot warfare and population movements which are believed to have led to violent changes at the center of the millennium; a new order emerges with Greek dominance of the Aegean and the rise of the Hittite Empire.

The side A of the Phaistos disk, as displayed in the Archaeological Museum of Heraklion after the 2014 renovation. Image Credit: Wikimedia Commons.
But this period was also marked by many different things.
It is believed that a mysterious artifact, dubbed the Phaistos Disc, housed today at archaeological museum of Heraklion was crafted by a mysterious people, written in an undecipherable text, during the end of the Bronze Age, around 1700 BC, that is, some 3700 years ago.

The side B of the disc of Phaistos, as displayed in the Archaeological Museum of Heraklion after the 2014 renovation. Image Credit: Wikimedia Commons.
The mysterious disk-shaped object is about 15 cm (5.9 in) in diameter and is covered on both sides with a spiral of stamped symbols.
Its purpose and meaning, and even its original geographical place of manufacture remains disputed among scholars, making it one of the most mysterious archeological artifacts on the surface of the planet.
The inscriptions, made by pressing hieroglyphic “seals” into a disc of soft clay, are hieroglyphical and are similar to those of the linear script A (the system used by the Cretan culture and still not deciphered totally) and the linear B (the one used by the Mycenaeans) together with others of unknown origin.

Some researchers attribute this to a non-Cretan origin, despite the fact that it was discovered, on July 3, 1908, in Phaistos, Crete. 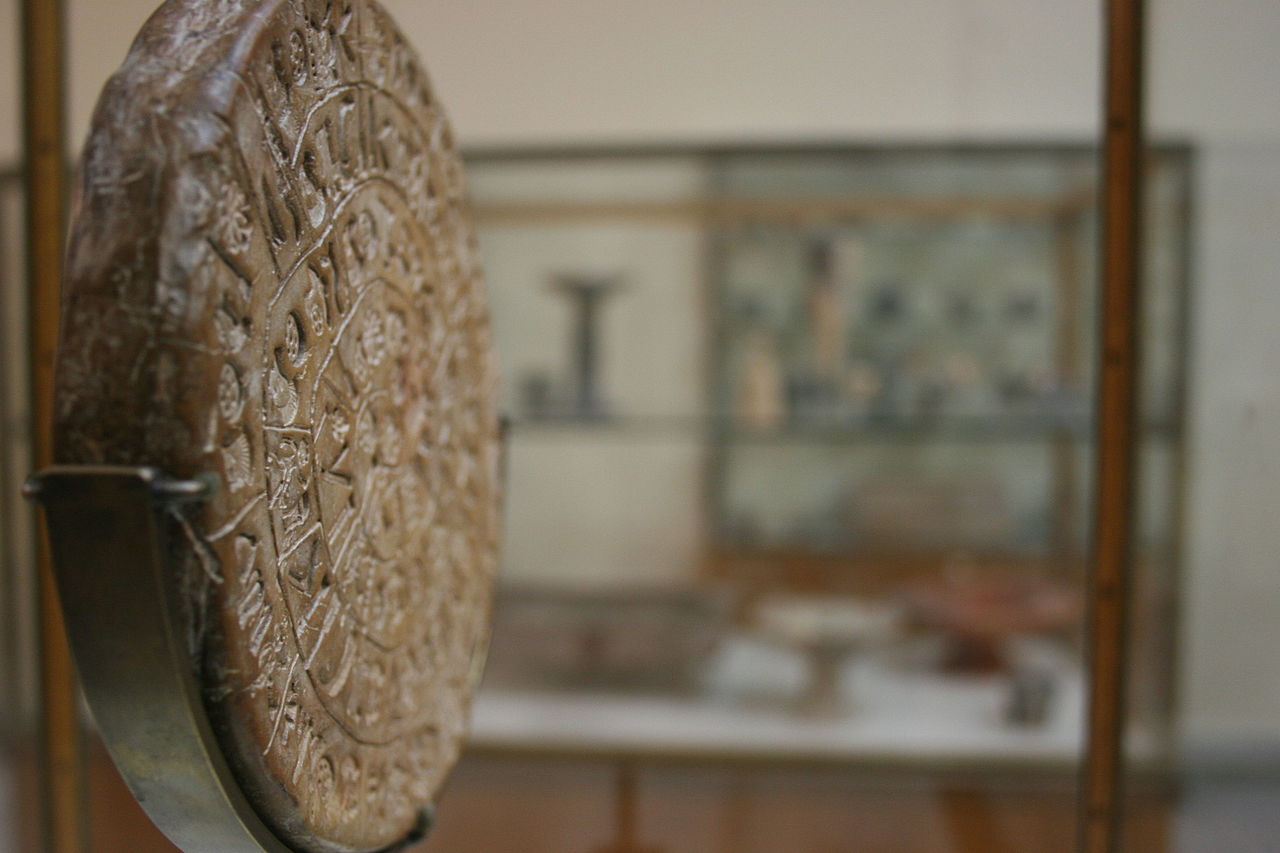 A Side view of the Phaistos Disk. Image Credit: Wikimedia Commons.
The disc was discovered by the Italian archaeologist Luigi Pernier in the Minoan palace-site of Phaistos and features 242 tokens, comprising 45 distinct signs, which were supposedly made by pressing hieroglyphic “seals” into a disc of soft clay, in a clockwise order spiraling toward the center of the object.  Many of these 45 signs represent easily identifiable symbols. In addition to these, there is a small diagonal line that appears underneath the final sign in a group a total of 18 times. The disc shows traces of corrections made by the scribe in several places.
However, many authors believe the disk is a forgery.

The doubts come from the own characteristics of the disc: the Phaistos Disk has straight edges, despite the fact that nearly all the clay disks of the time appear curved.
However, perhaps what casts the greatest doubts on the Phaistos Disk’s authenticity is that typographical seals were used in its manufacture when there is no other similar example in antiquity, or anything similar until the invention of the printing press by Guttenberg.
According to a report in The Times in 2008, the date of manufacture has never been established by thermoluminescence.

OUT OF MIND » TRUTH IN CONSPIRACY THEORIES? » HISTORIES MYSTERIES » The Enigma Of The Phaistos Disk, A 3,700-Year-Old Indecipherable Message