Admin
Posts : 107541
Join date : 2012-01-04
Location : Woodstock Nation
Why Hawaiians place plants before a wall of hot lava in Hawaii? These are ti leaves, a sacred offering to Pele, a goddess associated with fire and volcanoes
By
Strange Sounds
-
May 9, 2018

Among the astounding and forbidding images of the Kilauea eruption on the Big Island of Hawaii, there is a striking photo of lava advancing on a row of leafy branches, stuck into a crack in a pavement so that they look like a row of soldiers about to be overwhelmed by an enemy army. These are ti leaves, a “sacred offering” to Pele, a goddess associated with fire and volcanoes. Offerings of Hawaiian ti leaves, rocks, and cans to the goddess Pele lie in the street in front of the lava wall engulfing a road in the Leilani Estates subdivision on May 5, 2018. AP PHOTO/CALEB JONES
In 1986, during another Kilauea eruption, a UPI reporter noticed a similar detail: “Hawaiians scattered sacred ti leaves atop rampaging lava flows disgorged by fiery Kilauea volcano. Tradition has it that surging lava flows won’t cross a ti leaf barrier.”
Ti plants (also called ki) have had many [url=https://books.google.ch/books?id=bHdRhjL9Y9EC&pg=PA155&lpg=PA155&dq=ti+leaf+bundle&source=bl&ots=byB7a7MJNW&sig=NJYlP_Vwf99jDnucMN84Qe4d7aA&hl=en&sa=X&redir_esc=y#v=onepage&q=ti leaf]uses[/url] in Hawaii over time. They’re made into skirts, coats, and shoes; they’re woven into leis and used in thatched roofs. They’re wrapped around fish or meat and used as medicine.
But as Darde Gamayo writes for Big Island Now, “Early Hawaiians believed that the ti leaf plant had great spiritual power.” The leaves were associated with Lono, a god of fertility, and Laka, the goddess of hula, and they were used in rituals by religious and political leaders. In The Ruling Chiefs of Hawaii, the historian Samuel Kamakau describes how ti leaves were used in a ceremony to end restrictions on eating pork, for instance. Today, they’re still used in offerings to Pele at the rim of the Kilauea, a practice that has been popularized (and misunderstood) by tourists. 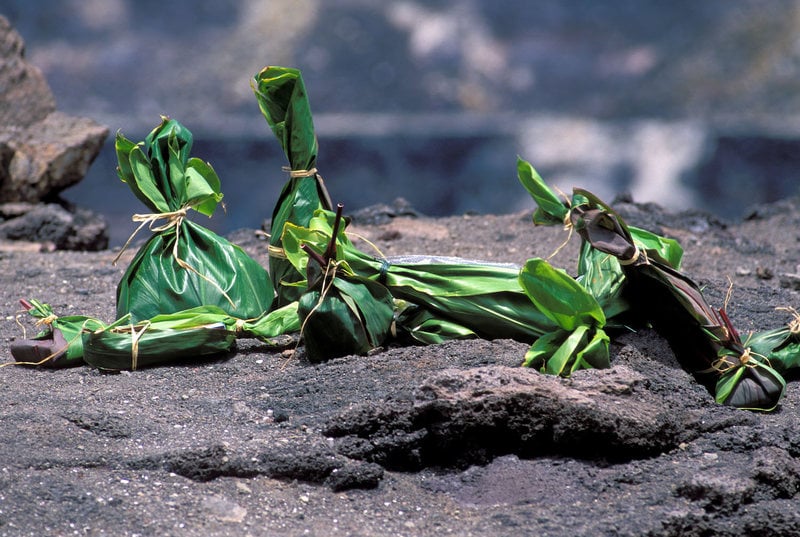 Offerings to Pele on the rim of Halemaumau crater Kilauea Caldera Hawaii Volcanoes National Park The Big Island Hawaii. RUSS BISHOP/ ALAMY
Sometimes, ti leaves are associated with protection from volcano-related dangers. One anthropologist in the 1920s observed ti leaves being used to shield a woman visiting a volcano, and ti leaves were carried by people performing the feat of fire walking on still-hot lava.
But over their long history in Hawaii (they’re thought to be “canoe plants,” brought to the islands with settlers from Polynesia), ti leaves have come to be thought of, more generally, as a plant that offers protection. They’re often used to keep away evil spirits. The anthropologist was told that ti leaves were laid under bed mats for this reason; some people believe the plants can contain vengeful spirits in their graves. Traveling with pork can attract “angry spirits,” too, and the leaves offer some protection. One of the more common ways to use ti leaves for protection is to plant them around your house.
Here people bringing offerings to Pele:

Hundreds of people have had to evacuate the area where the volcano’s lava is flowing, and in four days, the eruption destroyed 35 homes and other buildings. For people hoping that their houses will survive, anything that could offer extra protection could be worth a try.

And using a gift of Mother Nature to battle a natural disaster is just very satisfying! Hopefully, ti leaves really have powers of protection. Please have a prayers for Big Islanders right now and in the coming days.