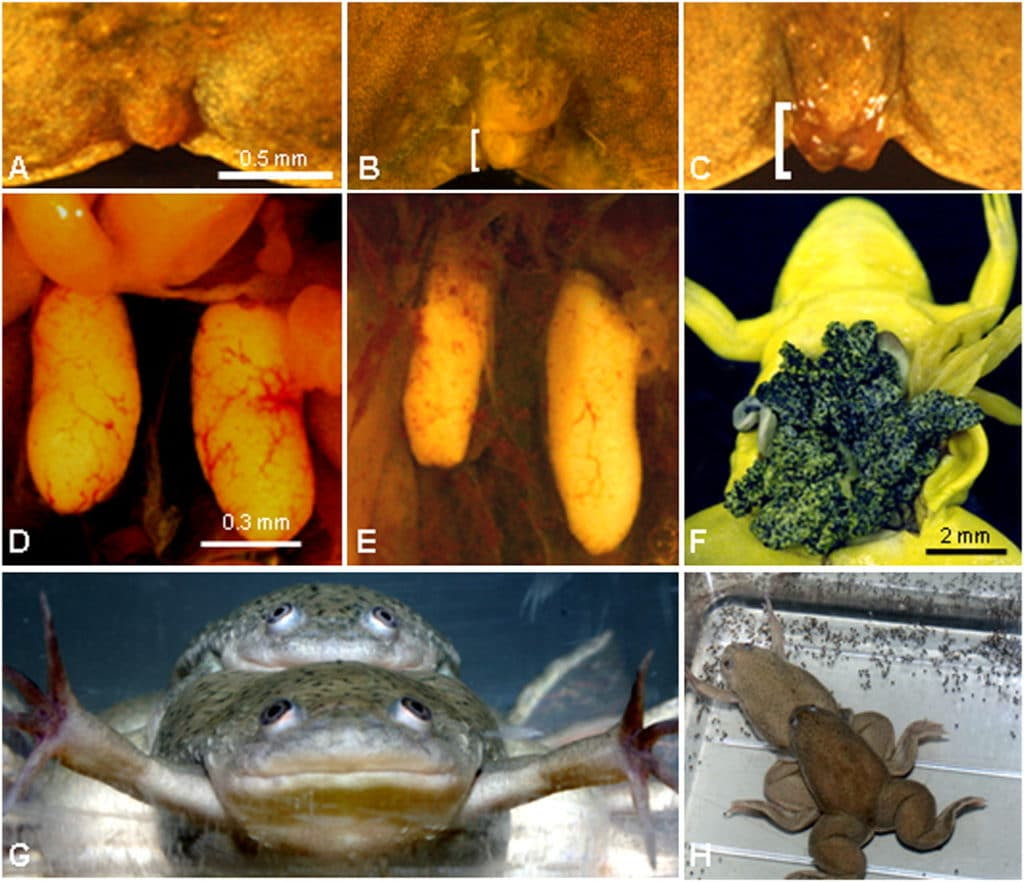 
(Ethan Huff) A scientific study has reaffirmed that a popular weedkiller manufactured by Syngenta and used on crop fields all across the United States is so damaging to the endocrine system that it can actually turn natural-born males into females.
Related Detox Yourself from These Everyday Items That Could Be Wreaking Havoc on Your Hormones
Source – Humans Are Free


by Ethan Huff, July 10th, 2018
Published in the journal Proceedings of the National Academy of Sciences, the paper by researchers from the University of California, Berkeley found that African clawed frogs (Xenopus laevis) exposed to just 2.5 parts per billion (ppb) of atrazine for three years – a level below the 3 ppb allowed by the Environmental Protection Agency (EPA) in human drinking water – ended up losing their maleness and becoming chemically castrated.
Of the 40 frogs that were included as part of the experiment, 30 could no longer reproduce after 36 months of exposure to atrazine.
Meanwhile, four of the frogs actually turned from male to female, and proceeded to mate with other males and successfully produce viable eggs – even though they were all born as natural males at the beginning of the study.
Atrazine induces complete feminization and chemical castration in male African clawed frogs
Only six of the 40 frogs were in any way normal at the conclusion of the study, suggesting an 85 percent damage rate resulting from exposure to atrazine at levels below what the federal government has deemed as “safe” for humans.
Just to be sure that the results weren’t erroneous, the researchers made sure to use male frogs with only ZZ sex chromosomes, meaning they couldn’t possibly have been hermaphrodites at the study’s outset. All 40 of the frogs were, in fact, males, and no other factor besides the atrazine, at least as far as this particular study is concerned, could have impacted their transitions from male to female.
“If we got hermaphrodites, there was no way to know if they were males with ovaries or females with testes,” stated biologist and study author Tyrone Hayes. “By using all ZZ males, we were assured that any hermaphrodites or females were indeed sex-reversed males.”
Atrazine causes the body to produce more female hormones like estrogen
Atrazine, which is currently sprayed on millions of acres of U.S. cropland to control grass weeds, seems to conversely spur the growth of a protein known as aromatase that causes the body to produce more female hormones such as estrogen. In frogs, excess aromatase can lead to male gonads turning into female ovaries.
This is hardly new information, as research dating back to the early 1990s revealed that atrazine directly interferes with normal hormone production, both in animals and humans, as well as in amphibians who bear the brunt of it from runoff in water.
Buy Book Altered Genes, Twisted Truth: How the Venture to Genetically Engineer Our Food Has Subverted Science, Corrupted Government, and Systematically Deceived the Public
Some 57 percent of U.S. streams, according to the U.S. Geological Survey, are now contaminated with atrazine.
This is why the European Union banned the use of atrazine back in 2003, citing “ubiquitous and unpreventable” water contamination from its continued use on food crops.
The U.S. has yet to follow, despite the fact that gender dysphoria and sexual confusion are at all-time highs throughout the nation. Could it be that crop chemicals like atrazine are having the same effects on humans as they are on frogs, causing progressively more damage with each passing generation? The evidence seems to suggest so.
“Atrazine increases aromatase and/or estrogen production in zebra fish, goldfish, caimans, alligators, turtles, quail and rats,” warns Hayes, implying that humans and many other species of life are being similarly damaged by its ubiquitous presence.
Keep in mind that Hayes has conducted similar atrazine research in the past on tadpoles, which arrived at the same disturbing results.
“So this is not just a frog problem,” he adds.
Abstract from the study:
The herbicide atrazine is one of the most commonly applied pesticides in the world. As a result, atrazine is the most commonly detected pesticide contaminant of ground, surface, and drinking water. Atrazine is also a potent endocrine disruptor that is active at low, ecologically relevant concentrations. Previous studies showed that atrazine adversely affects amphibian larval development.
The present study demonstrates the reproductive consequences of atrazine exposure in adult amphibians. Atrazine-exposed males were both demasculinized (chemically castrated) and completely feminized as adults. Ten percent of the exposed genetic males developed into functional females that copulated with unexposed males and produced viable eggs.
Atrazine-exposed males suffered from depressed testosterone, decreased breeding gland size, demasculinized/feminized laryngeal development, suppressed mating behavior, reduced spermatogenesis, and decreased fertility. These data are consistent with effects of atrazine observed in other vertebrate classes. The present findings exemplify the role that atrazine and other endocrine-disrupting pesticides likely play in global amphibian declines.
Another study showed that atrazine exposure in Zebrafish are associated with disruption of neuroendocrine and reproductive system function, cell cycle, and carcinogenesis. In other words it affects the brain, reproductive system, creation of new cells and is carcinogenic.
Sources: Naturalnews.com; Scientificamerican.com; / References: Atrazine induces complete feminization and chemical castration in male African clawed frogs; Legal levels of atrazine alter neuroendocrine, reproductive genes in zebrafish