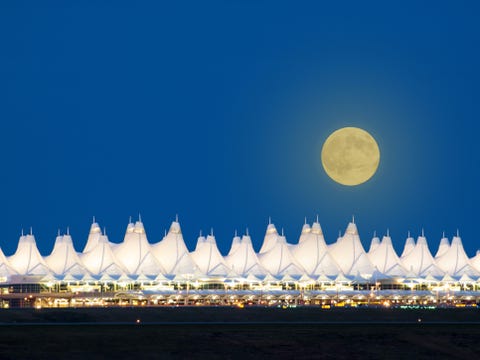 The Denver International Airport has been the subject of conspiracy theories for years. The airport’s curiously-swastika-like design immediately drew attention when the airport’s plans were made public, and a slew of construction delays led some to believe that hidden structures were buried beneath the new airport – structures which do actually exist.

There is a 7,000-foot tunnel system running underneath the airport used to transport baggage and various infrastructure needs. Anyone who has been in these subterranean train tunnels can attest to the weirdness of the labyrinthine tunnel system, which is curiously large in some places. It is often alleged that the tunnels are part of an apocalypse bunker connected to NORAD some 100 miles to the South, although these claims remain of course unproven. The weirdness of DIA goes a lot deeper than the bunkers, though. For one, there is a terrifying statue of a blue, oddly veiny, laser-eyed doom horse directly in front of the airport – a doom horse which fell on and killed its creator and is frequently alleged to be cursed.

Then there are the murals. When the airport opened, travelers were perplexed by strange, apocalyptic artwork lining the terminals which seemed to depict the end of civilization, a military dictatorship rising to power, and a New World Order stomping on humanity’s face forever.

Nothing weird about that at all.

Those murals were taken down earlier this year, but that hasn’t stopped the conspiracy theories from swirling – straight from the Denver International Airport itself. A series of large signs put up around the main terminal during construction seem to acknowledge the many mysteries surrounding the airport firsthand, making no attempt to hide from the conspiracy theories. Slogans like “New concessions? Or new conspiracies?” and “Under construction? Or underground tunnels?” accompany images of aliens, reptilians, and Blucifer, the apocalyptic doom horse statue. One of the signs even presents a multiple choice quiz for curious airport visitors:

What are we doing?
A) Adding amazing new restaurants and bars
B) Building an Illuminati headquarters
C) Remodeling the lizard people’s lair

How about “D) All of the above” as a write-in answer? In response to questions about the signs, DIA spokesperson Emily Williams says the airport wants to embrace the conspiracy theories rather than hide from them as a means of connecting with bleary-eyed, exhausted travelers. “I think that we recognize that conspiracy theories are part of our brand, Williams told the Denver Post. “It’s a fun way that we can engage with our passengers.”

The airport’s swastika-esque shape is also a fun way to engage with passengers.
Still, others aren’t so convinced that the signs are in good fun. Len Horowitz, a retired dentist, naturopath, and self-proclaimed whistle-blower, says the new marketing campaign rubs the agenda of the global military syndicate hellbent on domination right in our hapless, impotent faces:

It’s right in your face. They’ve taken all of the quirkiness of those who are considered foolish conspiracy theorists, and conspiracy theories, and blended it into their mixture of propaganda for damage control. It’s new. It’s a very unique thing.

Whether this is merely a quirky advertising campaign or a new strategy of blatantly admitting to some kind of New World Order scheme remains unknown. Could it be both?