OUT OF MIND » THE INSANITY OF REALITY » GOVERNMENTS & THE NEW WORLD ORDER » At George Soros’s Home in N.Y. Suburb, Explosive Device Found in Mailbox 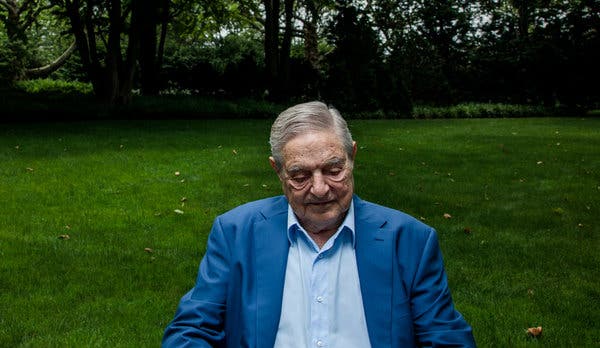 By Sarah Mervosh
An explosive device was found on Monday in a mailbox at a home of George Soros, the billionaire philanthropist who is a favorite target of right-wing groups, in a suburb north of New York City, the authorities said.
A law enforcement official confirmed that the device was found near Mr. Soros’s home. It did not explode on its own, and bomb squad technicians “proactively detonated” it, the official said.
Federal and state law enforcement officials responded to the scene in Katonah, N.Y., a hamlet in the upscale town of Bedford in northern Westchester County, after the Bedford Police Department received a call about a suspicious package at about 3:45 p.m.
“An employee of the residence opened the package, revealing what appeared to be an explosive device,” the police said in a statement. “The employee placed the package in a wooded area and called the Bedford police.”
Soros was not home at the time.
The police said they had turned the case over to the F.B.I., which did not immediately respond to requests for comment. In a tweet late Monday night, the bureau’s New York office said it was conducting an investigation “at and around a residence in Bedford” and that there was no threat to public safety.
The Bureau of Alcohol, Tobacco, Firearms and Explosives did not respond to a request for comment.
Mr. Soros, who was born in Hungary, made his fortune running a hedge fund and is now a full-time philanthropist and political activist. He donates frequently to Democratic candidates and progressive causes and has given at least $18 billion to his Open Society Foundations to promote democracy and human rights around the world.

His activism has made him a villain to conservative groups and the target of anti-Semitic smears. Roseanne Barr called him a Nazi in an infamous tweetstorm, and just this month, Representative Matt Gaetz, Republican of Florida, falsely speculated that Mr. Soros had funded a caravan of migrants moving north toward Mexico. There is no evidence that Mr. Soros paid thousands of migrants to storm the border. Nor is there evidence that Democrats support the effort, as President Trump has said.
Mr. Soros became a major political donor in the United States during George W. Bush’s presidency. He spent millions backing John Kerry’s unsuccessful bid to deny Mr. Bush a second term, was an early backer of Barack Obama’s 2008 presidential campaign and contributed more than $25 million to Hillary Clinton and other Democratic candidates and causes during the 2016 election cycle.
Though Mr. Soros’s name has become a trigger for a subset of Republicans and conservatives, he has said that his main goal as a political activist was to see a return to bipartisanship.
He has said it was the extremism of the Republican Party that had prompted him to become a major Democratic donor, but also said he is opposed to the extreme left.
“I don’t particularly want to be a Democrat,” he said.
Bedford is about 50 miles north of Manhattan and has been home to many well-to-do city transplants, including Martha Stewart, Glenn Close and Ralph Lauren. Katonah, where Mr. Soros has a home, is known for its cultural offerings, including the Caramoor Center for Music and the Arts and the Katonah Museum of Art.
The town is known for its insularity and lack of gossip, which allows for well-known residents to fly under the radar. “They look to Bedford as to being protective of their privacy,” John Stockbridge, Bedford’s historian, said in a phone interview.
Mr. Stockbridge said that the town has largely avoided drama or violent scares. “I’ve been here for 35 years and I don’t remember any incident like what you’re talking about,” he said.

OUT OF MIND » THE INSANITY OF REALITY » GOVERNMENTS & THE NEW WORLD ORDER » At George Soros’s Home in N.Y. Suburb, Explosive Device Found in Mailbox

» PEACEFUL PROTEST AGAINST GEORGE SOROS FOR SUNDAY, 11-20-2016, 9 AM, AT HIS HOME.
» The Secret Soros Summit – Inside the Secret Miami Meeting of George Soros’ Liberal Conspiracy
» Putin vs Soros EXPLOSIVE HOT BREAKING NEWS: Putin vs Soros
» REPORT: George Soros Is Behind Berkeley Riots! Why is he 'STILL NOT ARRESTED?'
»  GUIDE TO THE GEORGE SOROS NETWORK