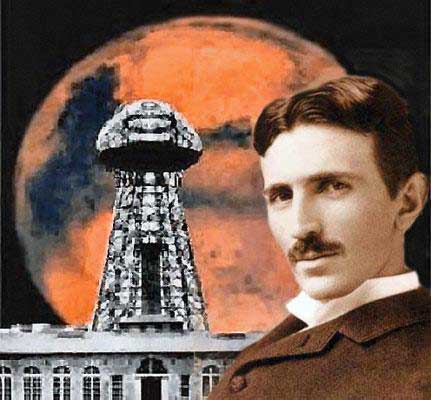 Aaron and Melissa Dykes of TruthstreamMedia were driving outside of Dallas near the small farming town of Milford, Texas, when a strange tower in the middle of a field caught their eye. It almost seemed like a joke because the shape was unmistakable. It looked just like Tesla/" target="_blank">Nikola Tesla’s Wardenclyffe Tower, the legendary experimental wireless transmission station he built in 1901 in Shoreham, New York to transmit phone calls, fax images and electrical power but which was demolished 16 years later due to bankruptcy.
A little bit of research revealed that the tower’s owners are Viziv Technologies and that the structure is, in fact a Tesla wireless transmission tower! Viziv is currently reviving the technologies of Tesla/" target="_blank">Nikola Tesla, having “developed a system of patent-pending processes and equipment to efficiently launch the Zenneck surface wave…[which is ] an electromagnetic wave that uses the surface of the earth as a waveguide enabling it to carry communications signals or electrical power efficiently over long distances…”
This discovery leads the Dykes on an investigative journey through FOIA documents into the story of Tesla/" target="_blank">Nikola Tesla, Wardenclyffe Tower, the Philadelphia Experiment and the Montauk Project – and to the military and Big Oil people (and their lawyers) behind Viziv Technologies.
Viziv’s website acknowledges that their technology “has the potential to impact numerous sectors of the economy.” Indeed, the current planetary financial and energy infrastructure and its millions of jobs and the petrodollar is what has kept the dinosaur fossil fuel model in place for the better part of a century – and all of the horrible things associated with it, from petrochemical toxins in the environment to the psychopathic wars in the Middle East.
A high-level investor friend tells me of rumors that Elon Musk’s Tesla also has its hands on similar technology, which they’re getting ready to release. Is a new technological era is about to explode publicly? Are we looking at some good investments that might give us a comfortable retirement?
This technology also looks like how the Internet of Things may eventually be transmitted and Aaron raises the appropriate concerns about the psychoactive, brainwave entrainment and mind control dimensions of this technology, as part of how it can be weaponized.
Aaron says, “In the next 10 or 20 years, it may change the way that we live. What do you think about that?” The details in this video are better than this write-up! Aaron and Melissa do such consistently vital and compelling work and this piece is a great example.