Must Hear: Cali Fire Victim Awake and Aware Tells What Activities Preceded the Paradise Fire & Her Observations On Evacuation 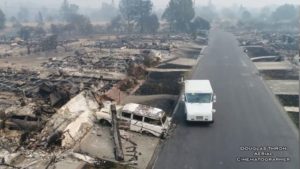 This is a jaw-dropping testimonial from a woman named Cheryl who lost her home in Paradise. What is fascinating is she has been well aware of chemtrails, aerosols, Morgellons, smart meters and the depopulation agenda for California for some time so her powers of observation were superior to most.
She reports a corporate helicopter was doing low-level surveillance on the properties a couple of weeks prior to the fires.
She and other residents got multiple threatening robo calls AND emails from PG&E announcing THREE DAYS BEFORE the fire that residents needed to prepare because there would be an extreme fire event on Thursday. She said they were basically telling residents, “we’re coming for you.”
As always, the dark tells us what they are going to do before they do it. Most people don’t recognize the warnings or don’t take them seriously, but she knew.
This is a shocking report, my friends. What Cherly saw happening when they got the call for mandatory evacuation of Paradise is beyond what most of us have heard before. In a matter of a couple of hours there was no smoke or fire in town at all, and then suddenly a mandatory evacuation.
She reports that the fires were set along the perimeter of town which burned inwards so many people were trapped—60 per cent or more of them being seniors. She says the officials are out there now pulling cadavers from homes. No wonder they won’t allow residents to go back to the properties. She says we will probably never know the true death toll.
The opening of the show touches on a spiritual thread (not religious) and Cheryl goes back to that concept again at the end. As we have said many times before, this isn’t just a political war or a physical war.
It’s a spiritual war for the ultimate battle of good against evil. We are not taught this truth to keep us at a disadvantage and that is how our adversaries have been able to control and manipulate us.
It’s time we learned the true nature of our world to put us on an even playing field with the enemy.
This account will surely put an end to the claims about conspiracy theories. It was a conspiracy, all right—in every sense of the word. Fully executed.
This is all-out war on America. Californians, and every one of us needs to understand how so much in our environment is potentially weaponized and these psychopaths may choose to use it.
Appliances, televisions, power lines, smart meters, propane, cell phones, electronic ignition, RFiD chips, WiFi… They have handed us the tools to exterminate us and we welcomed them with open arms due to their slick marketing. We have to wise up.  ~ BP