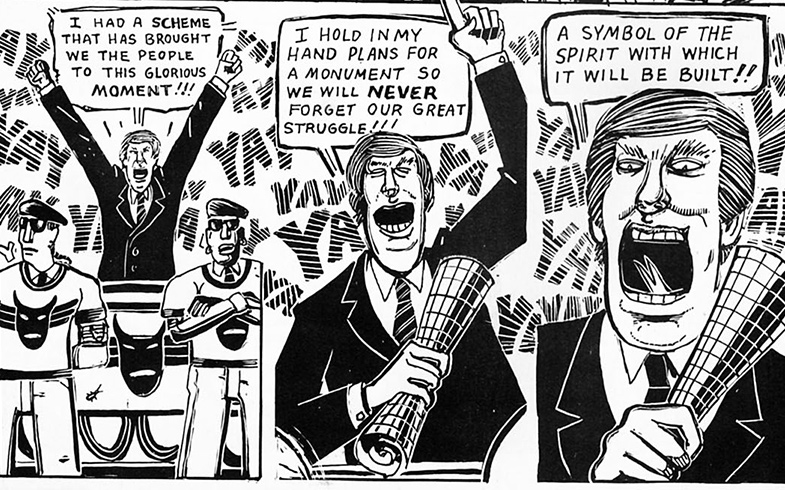 “The Wall” by Peter Kuper, from the July 1990 issue of Heavy Metal
So… a Trump presidency. Citizens of a divided nation are now trying to figure out what that means and where we go from here, with quite a few (on both sides) wondering how this even happened. Did anyone really foresee a Trump presidency — and when did they foresee it?
You may have heard that The Simpsons theorized a President Trump in 2000. But what you may not know is that Heavy Metal predicted 2016-style Trumpism back in 1990.
In the July 1990 issue, currently available in the Heavy Metal online store, we printed a story called “The Wall,” by Peter Kuper, about a conspiracy between Donald Trump and Harry Helmsley. Trump isn’t President here, but certain elements (hint: look to the title) are unmistakable. The full story is 12 pages long, but we’ll give you a taste: 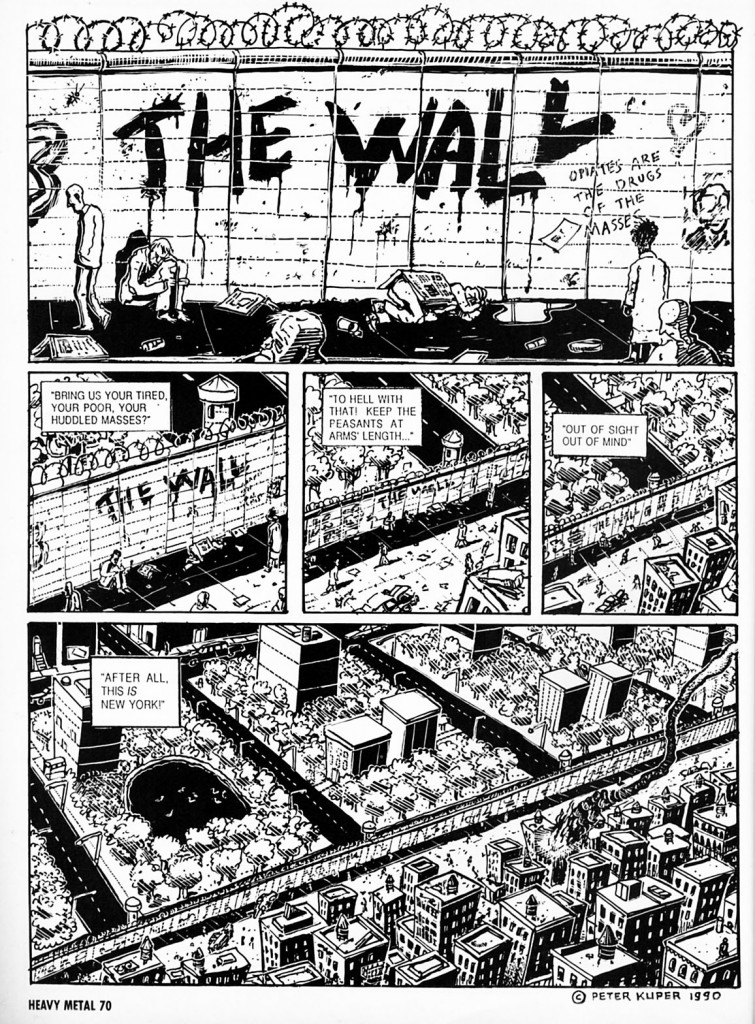 “The Wall” by Peter Kuper (click to enlarge)
“The Wall” begins with a disavowal of well-known lines of “The New Colossus,” the poem associated with the Statue of Liberty. In this story, we’re living in a divided city where the haves and have nots can barely relate to each other. In fact, the cultural and economic divide has been made real in the form of a wall to “keep the peasants at arm’s length.” 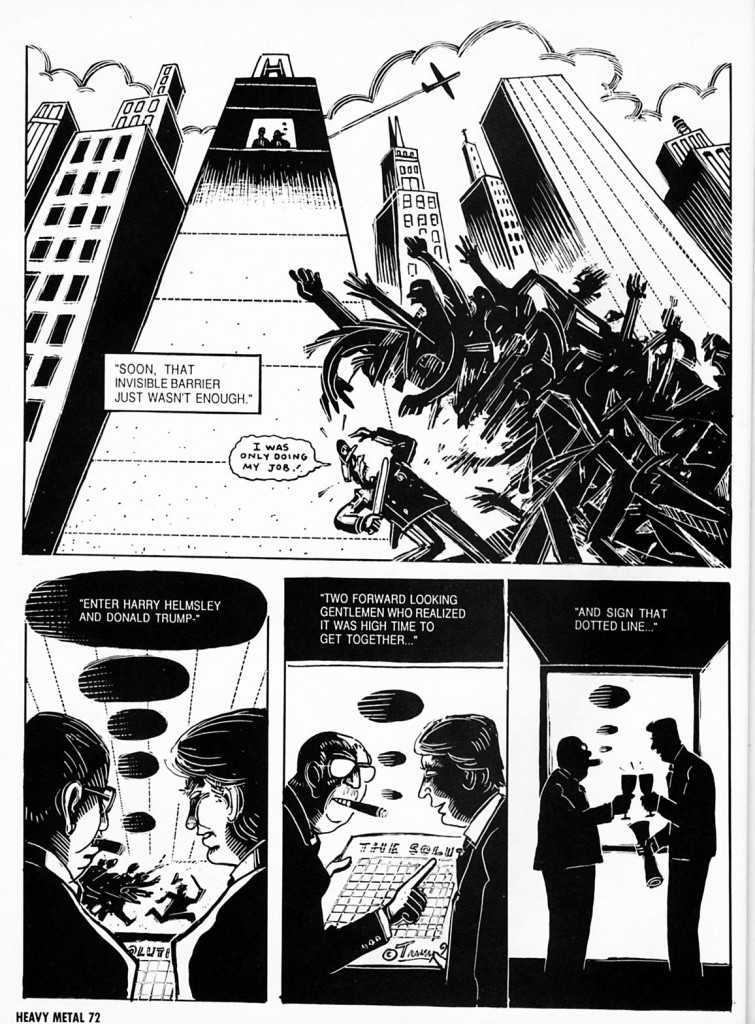 “The Wall” by Peter Kuper (click to enlarge)
Law enforcement had been overwhelmed; the cops were running for their lives. So, a wall: The brainchild of Trump and Helmsley. But the relationship between these two egomaniacs can’t last, and in a fit of rage Helmsley carries out a purge called the “Night of the Long Skates.” All Trump’s associates are wiped out, and Trump himself escapes into the NYC sewer. But Trump plots his revenge. 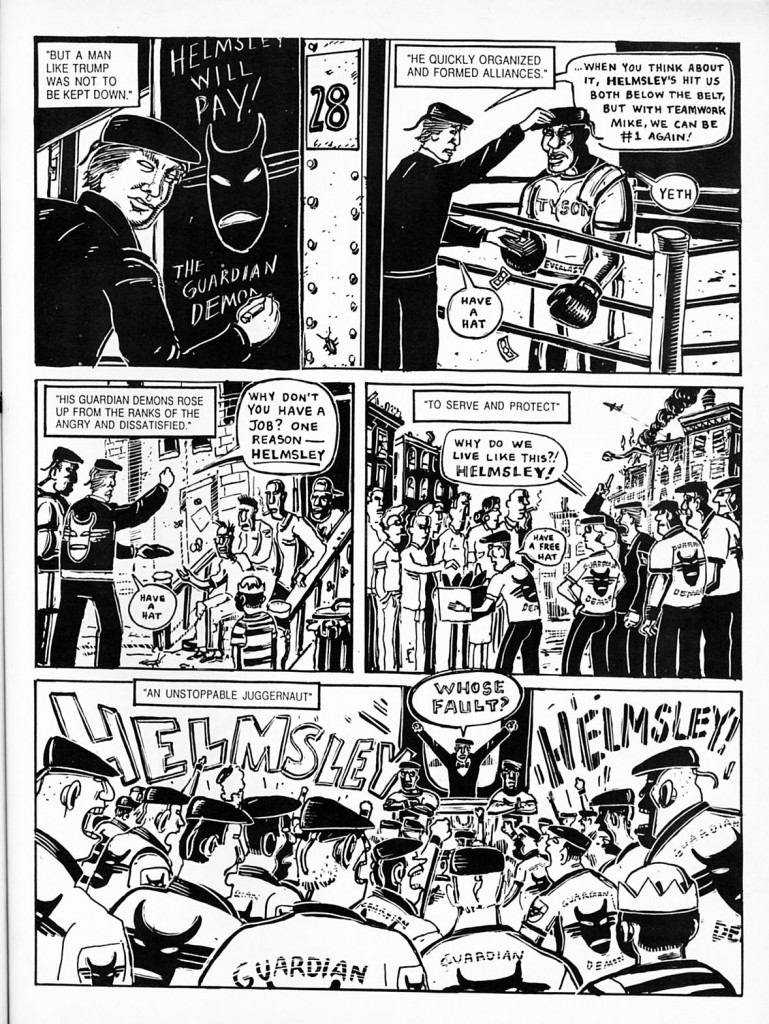 “The Wall” by Peter Kuper (click to enlarge)
There they are—the hats! Of course, they’re more like berets, meant to suggest the Guardian Angels, an amateur anti-crime organization founded in NYC in 1979. Who knows, maybe today’s Trump voters do fancy themselves crime-fighters, in a way. In this story, they band together in their hats, led by a Messianic Trump who convinces his followers that Helmsley is the reason for the unemployment and poverty they face. The mob carries Trump to a humiliating victory over Helmsley, a feat Trump promises to commemorate with a monument. And about that “monument”… 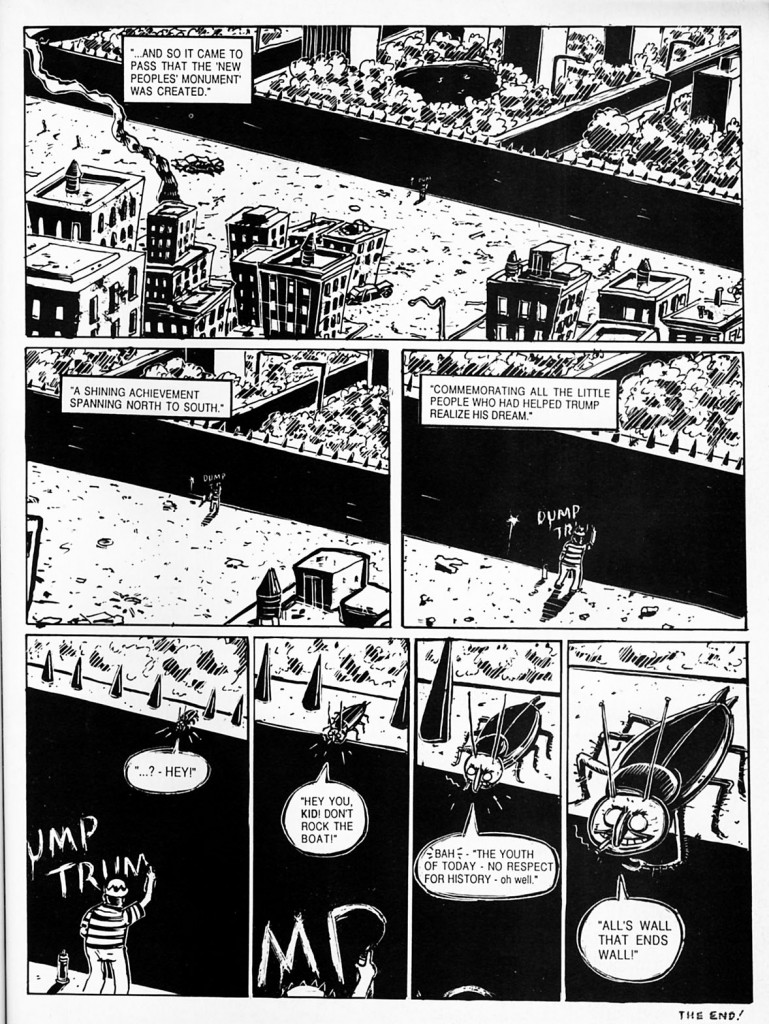 “The Wall” by Peter Kuper (click to enlarge)
Ok, so Trump isn’t president in this 26-year-old story, but the man depicted is fully recognizable as the current President-elect. The tactics used to motivate followers, the faith in the power of walls, the goddamn hats — it was all there.
If yo’d like to get your hands on this eerily prescient story, you can order the July 1990 issue in the Heavy Metal online store.