The jet stream. You’ve probably heard it mentioned many times in your local forecast. It is a river of fast moving air high up in the atmosphere – approximately 30,000 – 35,000 feet – that steers storms, and can have a huge influence on our local weather patterns. The jet stream typically reaches its highest speeds during the wintertime, when temperature and pressure differences across the mid-latitudes are at their greatest. In the summer, there is also a greater amount of rising air (convection, which leads to thunderstorms) which can disrupt the jet. In the cold months, the jet stream usually maxes out around 160 knots (184 mph).
This past Monday, however, a weather balloon launched from the New York National Weather Service recorded something that it never had before in our parts: a jet-level wind speed over 200 knots – approximately 231 mph! 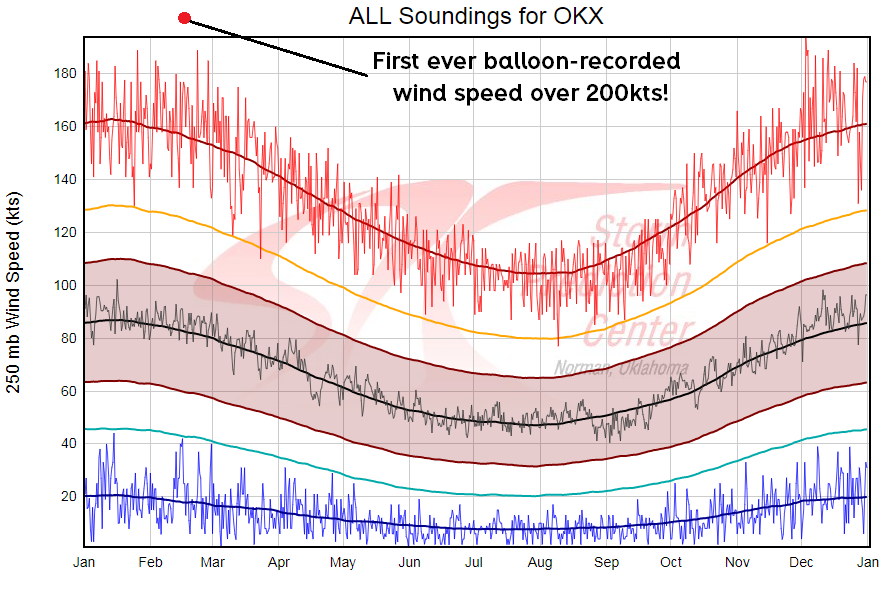 Why do jet stream winds get so fast?

In short, the air is much thinner at those heights, and there is virtually no friction impeding the flow. That is a big reason why the majority of commercial jets fly at those levels. With that in mind, it goes without saying that the jet stream can have a huge impact on how long a plane’s flight time will be.

Flying into the jet stream, in the same direction, will usually act as a booster. It happens fairly routinely, but what occurred on Monday went above and beyond. A Virgin Atlantic Boeing 787-9 Dreamliner was on its way from L.A. to London when it entered a max zone of the jet stream – also called a jet streak – over central Pennsylvania. The normal max speed of this particular aircraft is 587 mph, yet it was clocked at a speedy 801 mph! Taking the new speed of 801 and subtracting the recorded jet speed of 231 gives us 570; well within the range of the plane’s cruising speed.
It remained close to this torrid pace as it passed over Connecticut. The brief extra propulsion was enough to get the plane to its gate at Heathrow 48 minutes ahead of schedule. What service! Additionally, several other abnormally high plane speeds were recorded on Monday, leading to early arrivals. It is important to note that these were all west-to-east flights, which is also the typical flow of the jet stream. If you were headed in the opposite direction, it’s likely that your flight took a bit longer.
Amazing how nature can play with our technology!