After The Largest Beach Clean Up In History Baby Turtles Returned To The Beaches Of Mumbai Fri Mar 29, 2019 10:49 am 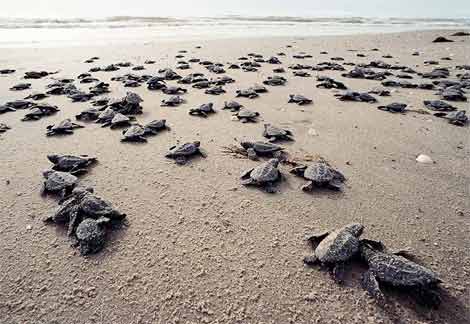 
The Versova Beach in Mumbai was once a garbage dump. But it has undergone the world’s largest beach clean-up process and it was a massive success. No, not just by sight. The Versova beach was once home to Olive Ridley turtles. As soon as the clean-up process was over, to the delight of conservationists, roughly 80 baby turtles were spotted, trying to go across the Versova beach. An activist from Mumbai, Afroz Shah, had his eyes fill up with tears when he saw these babies walk in the direction of the ocean.
It must have been after a couple of decades that these turtles were spotted here. The beach was an important point of rest for these turtles when they migrated to the Arabian sea. Now, watching these turtles come back makes the entire clean-up process worth it. Shah started the drive back in October 2015. And it took about two whole years for the volunteers to clear this beach and to remove the heaps of trash present on the beach. It was almost five feet high and had clogged the beach in such a way that it barred the access point of the turtles. But now, the beach is clean and the turtles are free to roll in the sand as they used to do decades earlier.

Shah had been the person who gathered the volunteers and organized the clean-up process. They educated the locals to not use the beach like a landfill and cleaned up the river systems too. Shah also took the effort to clean up about 52 restrooms around the area and planted about 50 coconut trees along the beach. The entire clean-up process took about two years and they had collected 11 million pounds of garbage in the process. The entire team is also planning to plant mangrove trees which will help counter the excess flooding in the area and also improve the water quality. In December 2016, the United Nations awarded Shah with the Champion of the Earth Award due to his clean up efforts and the wonderful outcome of the return of Oliver Ridley turtles to Mumbai. The project was named ‘World’s largest beach clean-up effort’ back in July 2016.
Shah is an inspiration and we should follow his example to make changes in our environment too. We need to make it habitable for us and for the animals that share this planet with us.

Re: After The Largest Beach Clean Up In History Baby Turtles Returned To The Beaches Of Mumbai Fri Mar 29, 2019 12:35 pm

Re: After The Largest Beach Clean Up In History Baby Turtles Returned To The Beaches Of Mumbai Fri Mar 29, 2019 8:15 pm