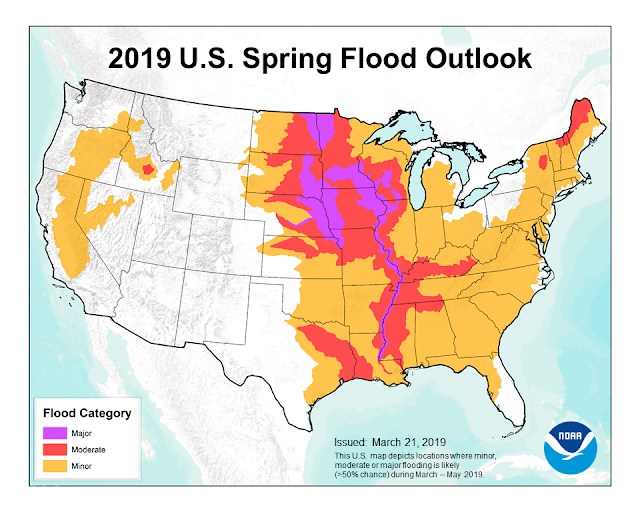 Sent in by my good friend Carol Rosin.

The US has never seen catastrophic flooding like this before and NOAA is warning us the flooding will continue through to the end of May.
With more than 90% of the upper midwest and great planes are still covered by nearly 11 inches of snow and all that snow is beginning to melt.
That means the US will transform from one of the worst winters in modern history into a flood season that has already taken an apocalyptic turn for farmers across the US.
Millions of acres of farmland are already under water meaning thousands of farmers will not be able to plant crops this summer, with thousands of more farmers who have been financially ruined by the floods and will never return to farming again.
So far, 2019 is already the worst agricultural disaster in modern American history and it is going to get a whole lot worse.

Nearly two-thirds of the Lower 48 states face an elevated risk for flooding through May, with the potential for major or moderate flooding in 25 states, according to NOAA’s U.S. Spring Outlook issued today. The majority of the country is favoured to experience above-average precipitation this spring, increasing the flood risk.

Portions of the United States – especially in the upper Mississippi and Missouri River basins including Nebraska, Minnesota and Iowa – have already experienced record flooding this year. This early flooding was caused by rapid snowmelt combined with heavy spring rain and late season snowfall in areas where soil moisture is high. In some areas, ice jams are exacerbating the flooding. Offices across the National Weather Service have been working with local communities, providing decision-support services and special briefings to emergency managers and other leaders in local, state and federal government to ensure the highest level of readiness before the flooding began.

Additional spring rain and melting snow will prolong and expand flooding, especially in the central and southern U.S. As this excess water flows downstream through the river basins, the flood threat will become worse and geographically more widespread.

“This outlook will help emergency managers and community decision-makers all along the nation’s major waterways prepare people and businesses for the flood threat,” said Neil Jacobs, Ph.D., NOAA’s acting administrator. “In addition to the safety aspects, our rivers are critical to the economic vitality of the nation, supporting commerce, recreation and transportation. NOAA forecasts and outlooks help people navigate extreme seasonal weather and water events to keep the country safe and moving forward.”

Spring Flood Risk
Record winter precipitation across a large swath of the country has set the stage for the elevated flood risk. The upper Mississippi and Red River of the North basins have received rain and snow this spring up to 200 per cent above normal.

The areas of greatest risk for moderate to major flooding include the upper, middle, and lower Mississippi River basins including the mainstem Mississippi River, Red River of the North, the Great Lakes, eastern Missouri River, lower Ohio, lower Cumberland, and Tennessee River basins.

Additionally, much of the U.S. east of the Mississippi River and portions of California and Nevada are at risk for minor flooding.

“The extensive flooding we’ve seen in the past two weeks will continue through May and become dire and may be exacerbated in the coming weeks as the water flows downstream,” said Ed Clark, director of NOAA’s National Water Center in Tuscaloosa, Alabama. “This is shaping up to be a potentially unprecedented flood season, with more than 200 million people at risk for flooding in their communities.”

The flood risk outlook is based on a number of factors, including current conditions of snowpack, drought, soil moisture, frost depth, streamflow and precipitation. Local heavy rainfall, especially associated with thunderstorms, can occur throughout the spring and lead to flooding even in areas where overall risk is considered low. In the western U.S., snowpacks at higher elevations may continue to build over the next month, and the flood risk will depend on future precipitation and temperatures.

Spring Outlook for Temperature, Precipitation and Drought
Above-average rain and snow in California this winter has pulled the entire state out of its seven-year drought. Scattered areas of the Southwest, Southeast and Pacific Northwest are abnormally dry, but the worst drought conditions in the U.S. are in northern New Mexico. Springtime rain and melting of deep snowpack are favoured to slightly improve the drought there. Drought will persist through spring in southern Alaska and Oregon and may develop in Hawaii.

Above-average precipitation is favoured from the Central Great Basin to the East Coast and in Alaska, compounding the flood risk for many states, especially in the Central and Northern Rockies and in the Southeast.

“Severe weather and flooding can strike anywhere, whether or not you are in a high-risk area,” said Daniel Kaniewski, Ph.D., deputy administrator, Federal Emergency Management Agency. “Insurance is the first and best line of defence.
NOAA produces seasonal outlooks to help communities prepare for weather and environmental conditions that are likely during the coming months. Heavy rainfall at any time can lead to flooding, even in areas where overall risk is considered low. The latest information for a specific area, including official watches and warnings, are available at http://water.weather.gov. Empowering people with information to prepare and take action is key to NOAA’s effort to build a Weather-Ready Nation.
https://youtu.be/XlabasSCvq0
Thanks to: http://www.thebigwobble.org