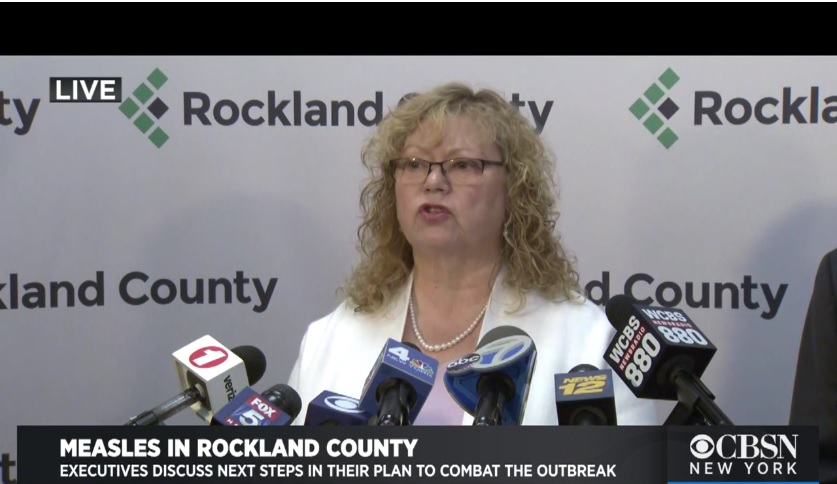 Rockland County Commissioner of Health Dr. Patricia Schnabel Ruppert. Image source.
by Brian Shilhavy
Editor, Health Impact News
In spite of an injunction preventing Rockland County, New York, from banning unvaccinated children from public places issued by a state Supreme Court Judge, County Executive Ed Day and Rockland County Commissioner of Health Dr. Patricia Schnabel Ruppert are proceeding with a new ban, and going door to door warning people of the ban.
The new ban apparently allows for religious exemptions, as required by state law. But for those who fail to comply, they are being threatened with a $2000 a day fine. CBS New York reports:

Rockland residents are already getting knocks on the door and delivery of notices that say unvaccinated people exposed to measles must stay away from indoor and outdoor public places for 21 days or face $2,000 fines.
“We will restrategize at every opportunity regardless of what’s thrown in front of us. That’s just what we’re going to do,” Nassau County Executive Ed Day said.
County leaders believe a new order that’s more focused will stand up to legal challenges. It goes one step further in keeping people who are unvaccinated away from everyone else.

However, Rockland County may have new legal issues, as the Health Department announced that they have obtained school health records of students, and are now going to use those records to single out and target students who are not vaccinated in an apparent violation of HIPAA medical privacy laws:

The county also has completed an audit of school age children, has their names and addresses, and is ordering parents to keep unvaccinated children home unless they have a religious or medical exemption.
“I didn’t have that information weeks ago. Now that I have it, I’m going to look at those students and say ‘You need to be out until you get it,’” said Rockland County Health Commissioner Dr. Patricia Ruppert. (Source.)

On Monday (April 15, 2019) New York attorney Robert Krakow filed a lawsuit against the vaccination ban on behalf of a group of parents, arguing it was “arbitrary, capricious, contrary to law and in violation of petitioners’ rights under the United States Constitution and New York State law.”
An Associated Press article reporting on the lawsuit incorrectly wrote:

Their attorney, Robert Krakow, claimed the measles-mumps-rubella vaccine “can cause many vaccine injuries, including encephalitis and death.”
Medical experts have debunked those claims and proven that the vaccine is safe, but opposition to vaccines persists.

The “claims” made by attorney Krakow are based on actual cases he has litigated in the federal vaccine court, where his clients have been awarded damages due to the MMR vaccine. (One case here.)
Another law firm representing vaccine victims in the U.S. Vaccine Court, Maglio Christopher & Toale, negotiated a $101 million settlement last year (July 2018) for an infant who suffered from encephalopathy due to the MMR vaccine. (Source.)
The potential side effects of “encephalitis and death” are actually listed in the MMR drug manufacturer package insert:

So the corporate media’s claim that “Medical experts have debunked those claims and proven that the vaccine is safe” is 100% false.
See also:

The other thing the corporate media continues to do is quote measles statistics over a 7-month period, making it seem like there are currently hundreds of active measles cases.
And yet, one person’s call into the Rockland County Health Department recently revealed that there were currently only 5 active measles cases when the first ban was issued:

CBS New York has conducted two polls in recent weeks, showing that the New York public is overwhelmingly opposed to these government actions, and do not share the same fear over the childhood disease of measles as the government does. 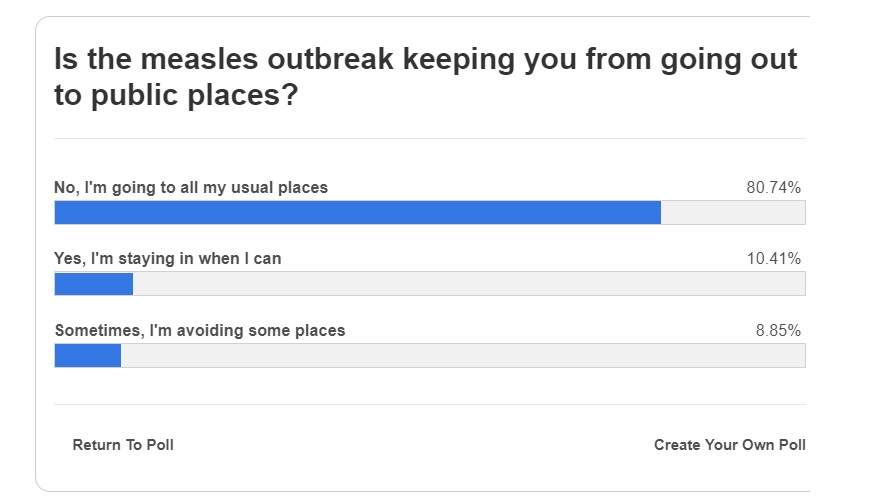