A prehistoric forest of hundreds of trees which died more than 4,500 years ago has been uncovered on a Welsh beach after low tides and a storm. The forest near the village of Borth, Ceredigion, Mid Wales, used to stretch for up to three miles along the shore between Ynys-las and Borth but eventually was buried under layers of peat, sand and saltwater. The eerie remains of these ancient trees under Borth’s beach have led to the local legend of the mythical Sunken Kingdom of Wales, called Cantre’r Gwaelod. Folklore has it that Cantre’r Gwaelod, or the Sunken Hundred, was a once-fertile land and township stretching for 20 miles, but was lost beneath the waves in a mythical age. A prehistoric forest which was buried under water and sand more than 4,500 years ago and inspired a local legend has been uncovered on a Welsh beach. Picture by Wikipedia user Badgernet / CC BY-SA 3.0


According to tales passed down through the ages, disaster struck and Cantre’r Gwaelod was lost to floods when Mererid, the priestess of a fairy well, apparently neglected her duties and allowed the well to overflow. Some say that on a quiet day, they can hear the bells of the drowned church of Cantre’r Gwaelod.


Now the remains of the forest’s trees have been exposed more clearly than ever by low tides and high winds from Storm Hannah. In 2014, shin-high stumps were visible for the first time, but locals said they were soon mostly re-covered by sand.


A storm this week combined with the low tide to expose the Bronze Age forest to curious passersby. Thick trunks and sprawling roots were seen in their entirety for what is believed to be he first time in thousands of years.

Locals said they think it is the most of the forest to be revealed in living memory as Storm Hannah dug out the roots which were revealed by a lower than usual tide.

Amateur photographer Wayne Lewis, 38, from Welshpool was walking on the beach when he spotted the uncovered forest.

Experts have found the submerged forest contains pine, alder, oak and birch trees. It is thought the trees stopped growing between 4,500 and 6,000 years ago, as the water level rose and a thick blanket of peat formed.
He said: ‘The trees really are stunning. It’s breathtaking that these trees were part of a Bronze Age forest that extended almost to Ireland, but have not been seen for thousands of years. It first emerged in 2014, but was then partially recovered, and usually you are only able to see the tips of the tree stumps. It seems it has been uncovered again recently. I don’t know for sure, but it is probably due to a combination of “Storm Hannah” with the
80mph+ winds last month, and the tides have been very low, making more of the forest visible.‘ 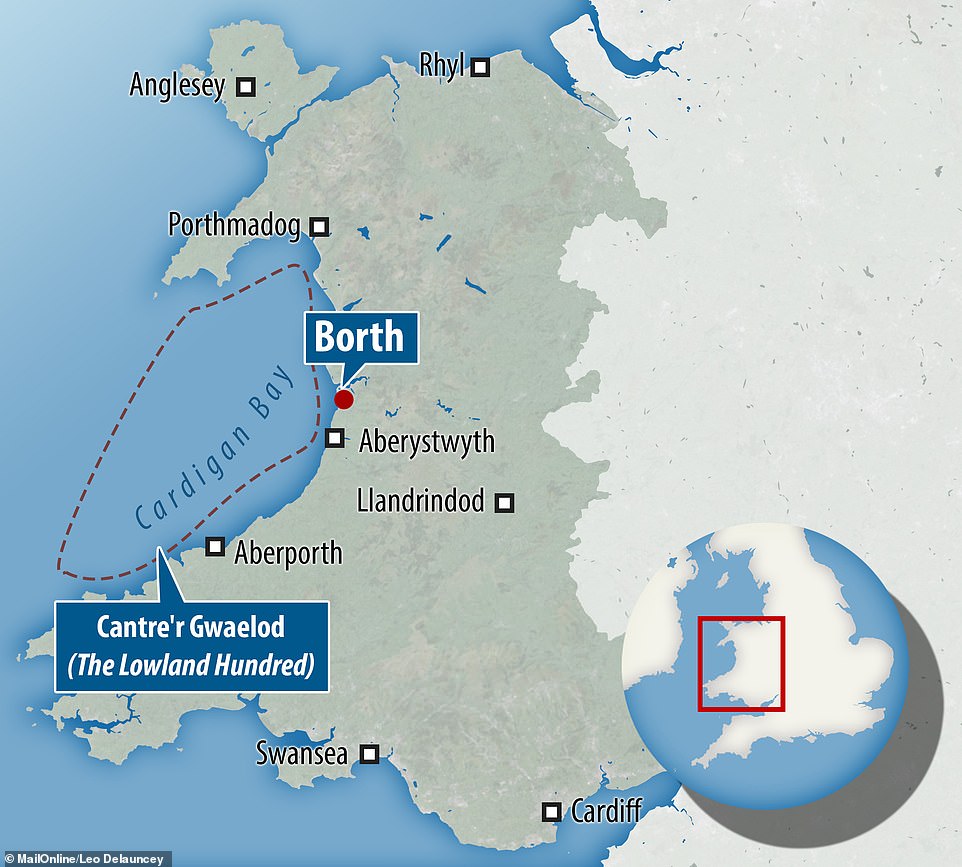 Folklore has it that Cantre’r Gwaelod, or the Sunken Hundred, was a once-fertile land and township stretching for 20 miles, but was lost beneath the waves in a mythical age. Map via DailyMail

The myth of the ancient kingdom, dubbed the Atlantis of Wales, includes a legend that Cantre’r Gwaelod extended about 32 kilometres (19 miles) west of the current shoreline into the bay.

A range of archaeological finds has been unearthed at the site, including fossilised human and animal footprints, and well as some human tools were discovered in recent years.

The most known legend, which is told today describes Cantre’r Gwaelod as an extremely fertile land, so much so that an acre of land there was worth four elsewhere.

The only problem with Cantre’r Gwaelod was that it was said to be dependent on a dyke to protect it from the sea.

In a more recent version, the watchman appointed to look after the gates was a heavy drinker.

» Thousands of Giant snowballs appear on Russian beach in Siberia
» A tree petrified for 10 million years tells another story of the past climate
» ★Neil YoungDaryl Hannah together he files for divorce from his wife of 36 years
» Washed away Irish beach reappears after 33 years, again
» Beach littered With Thousands Of Snail Eggs