FDA Analysis Reveals Sunscreen Chemicals Soak All the Way Into Your Bloodstream Fri Aug 02, 2019 1:03 am 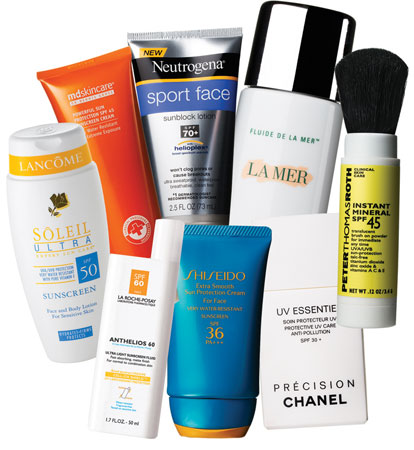 You’ve heard it from YouTube influencers and scientists alike: when you’re in the sun, you need to slather on sunscreen. While this is good advice for families who visit the beach only a handful of times each year, it could be the opposite for folks who use sunscreen every day. Why? Because according to a recently-released report by the Food and Drug Administration (FDA), the UV-blocking chemicals soak all the way into your bloodstream.
Believe it or not, a safety testing on the active ingredients in sunscreen has never-before been conducted. This is because the chemicals were approved decades ago, before anyone thought they could be absorbed into the body. For this reason, the FDA led a small clinical trial on over-the-counter sunscreens.
The purpose was to test how the most common sun-filtering molecules behave after being sprayed on and rubbed in. The results were published in the journal JAMA. As it turns out, the UV-blocking chemicals seep directly into the bloodstream. This is contrary to what sunscreen manufacturers have been saying.

“Everyone had always thought that because these are intended to work on the surface of the skin that they wouldn’t be absorbed, but they are,” said Theresa Michele, director of the FDA’s division of nonprescription drug products and coauthor on the FDA-funded study.

For the trial, 24 volunteers were recruited — 12 men and 12 women. They were randomly assigned to apply one of four commercial available sunscreens: two sprays, a lotion, and a cream. As Wired reports, the participants applied the sunscreens according to the recommended labeling: four times a day for four days to 75 percent of their bodies (roughly the amount of skin showing if you wore a bathing suit).
Over the course of the four days, and for three days after, the researchers collected blood every few hours and analyzed it for the presence of avobenzone, oxybenzone, octocrylene, and ecamsule. In total, 30 samples were taken.

The team discovered that the photoprotective chemicals soak into the bloodstream within a few hours of being applied. This caused concentrations to rise above the FDA’s toxicology threshold that triggers further safety testing. In addition, the levels for three out of the four sunscreens remained elevated through the end of the study — three days after participants had stopped applying them to their bodies. The cream users saw their concentrations clear out the fastest.
While this is an alarming finding, there is no evidence yet that the chemicals are doing anything harmful inside the body. “There might be nothing, and that would be great,” said Kanade Shinkai, a dermatologist at UC San Francisco and editor in chief of JAMA Dermatology. “But the problem is that we just don’t know.” Regardless, this finding will have serious impacts on the sunscreen manufacturers, as consumers want to feel assured in the products they purchase and use.
More research is desperately needed, particularly on how absorption rates differ in infants, children, and the elderly. For now, the FDA is asking US sunscreen makers to submit additional data measuring how these ingredients absorb into the bloodstream. If the manufacturers’ products absorb above the toxicological threshold, they will be forced to run more tests on the cancer risk and harm to the reproductive and endocrine systems.
In November, new rules will be published by the agency. So far, only two ingredients have been ruled safe and effective: zinc oxide and titanium dioxide. If manufacturers fail to conduct absorption studies and provide that data to the FDA, their products could be pulled from shelves. The FDA has said it will grant deferrals to companies willing to commit to undertaking the necessary studies for the remaining 12 UV-filtering molecules.
What are your thoughts? Please comment below and share this news!

» News Shot: New A.I. Tech Injected Directly Into Bloodstream Turns Humans Into Hybrids
» POOFness for JAN 20: We Can Help Heal The World While We Soak You For Donations
» Albino Mother and Baby Wallaby Soak up the Sun
» Something is going on! Skies strategically hammered with chemicals...again.
» Chemicals are Killing Our Systems!