OUT OF MIND » THE INSANITY OF REALITY » GOVERNMENTS & THE NEW WORLD ORDER » FISA IS ONLY THE BEGINNING. THE TRUTH WILL BE TOLD. -- Dr. Dave Janda

FISA IS ONLY THE BEGINNING. THE TRUTH WILL BE TOLD. -- Dr. Dave Janda 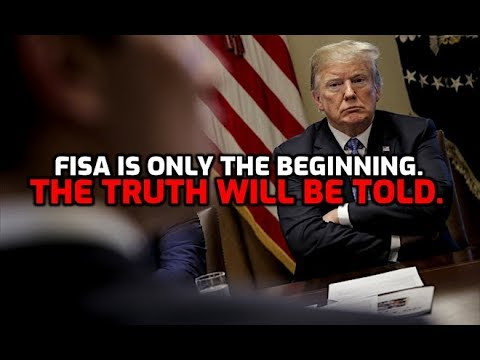 
This latest turn of events with Iran is concerning, particularly as it feeds into both Christian and Shiite End Times prophecy.
The Ayatollah Khamenei is heavily invested in the belief in the return of the Redeemer of Islam, known as the Mahdi. According to Shia tradition, the Mahdi’s tenure will coincide with the Second Coming of Jesus (Issa), who will assist the Mahdi against the Dajjal (Antichrist) to bring justice and peace by establishing Islam throughout the world.
We are in a war of narratives.
With the Swamp, the Fake news and Hollyweird now terrorizing the public about World War III, after having said nothing when Obama dropped over 26,000 bombs in 7 countries in the year of 2016, alone – nearly 3,000 times without with approval of Congress, I think it’s important to offer another narrative about Iran that you will never hear in the Mainstream Media but that you will hear referred to in QAnon posts, on InfoWars, the X22 Report and in the words of Dr Dave Janda, who joins Sean at the SGT Report.
The alternative narrative is this: the theocratic regime of Iran, of which Ali Khamenei is the Supreme Leader of the Islamic Revolution was installed by and is a part of the Globalist Deep State – and the Iranian people have been hostage to them ever since.
As Dave Janda says here, “[Maj. Gen. Qasem] Soleimani…was the head of operations for terrorism for the Deep State.”
Once you understand this version of reality, that Iran is a secret ally of the Globalists, which is diametrically opposed to the official narrative, that Iran is a rogue enemy of the Liberal World Order, certain recent episodes in the Middle East suddenly make sense.
You then understand why Barack Obama gave the Khamenei regime $1.7 billion in unmarked bills on pallets, in the UN-EU-brokered 2015 Iran Nuclear Deal. You then understand why the King of Globalism, himself, Pope Francis sang the praises of this deal.
You also understand why CNN aired Soleimani’s funeral on Saturday and why the late leader of ISIS, Abu Bakr al-Baghdadi was referred to in the Washington Post as an “Austere religious scholar”.
Dr Janda also gives his views on other things that are on deck, like the 2020 election, the coming DECLAS, the expected indictments of coup-plotters from US Attorney John Durham and the brewing flashpoint for civil war, with Virginia Governor Ralph Northam’s Unconstitutional gun grab.
Northam is finding the local sheriffs will not enforce it and neither will the National Guard, who he’d threatened to call in. Janda opines that Northam must be blackmailed to within an inch of his life to be attempting to infringe on the Second Amendment Rights of his constituents.

OUT OF MIND » THE INSANITY OF REALITY » GOVERNMENTS & THE NEW WORLD ORDER » FISA IS ONLY THE BEGINNING. THE TRUTH WILL BE TOLD. -- Dr. Dave Janda