» Another EX-CIA Director Comments on UFOs & Shares A “Paranormal” Story

ARMIES OF UNIDENTIFIED DRONES ARE APPEARING OVER THE WESTERN U.S. AT NIGHT, AND IT IS REALLY FREAKING PEOPLE OUT

ARMIES OF UNIDENTIFIED DRONES ARE APPEARING OVER THE WESTERN U.S. AT NIGHT, AND IT IS REALLY FREAKING PEOPLE OUT Wed Jan 08, 2020 11:25 am

Our world is a very strange place, and it is getting stranger by the day 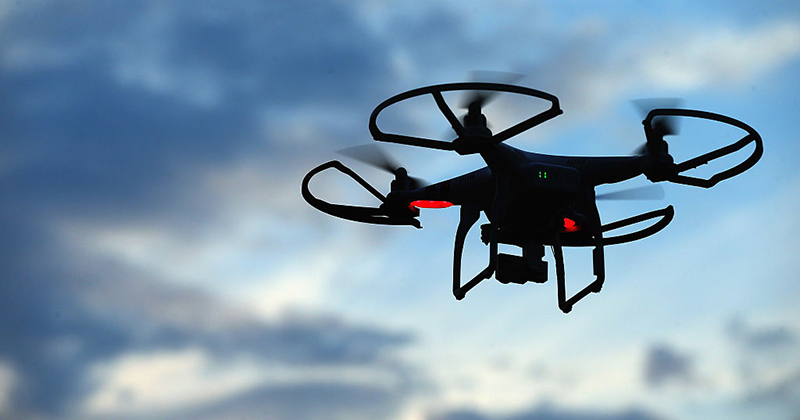 Source: Michael Snyder | End Of The American Dream
Since just before Christmas, armies of unidentified drones have been appearing each night in the skies above Colorado, Nebraska and Kansas.
The drones are approximately 6 feet wide and they have red and white lights, but nobody knows where they are from or who owns them.
This is a story that is now receiving national attention, and the FBI, the FAA and the U.S. Air Force are all investigating this mystery.
According to eyewitnesses, these drones can move “much faster than a regular aircraft”, and that would seem to indicate that they are highly sophisticated.
So far, the U.S. military, every government agency that has been asked, and many of the major companies in the area have all denied operating the drones.
Federal, state and local law enforcement officials have been doing all that they can to solve this mystery, but so far they have come up completely empty.

Could the Deep State use threats from Iran to complete their coup against President Trump?

And even though these drones are now receiving so much attention, they just keep coming back night after night.  According to one northern Colorado resident, when the drones come out it looks like “something from a movie”…

For the last week, Michelle Eckert has spotted a high-flying, night-time mystery above her rural northern Colorado home. She has seen drones, sometimes a dozen or more with wingspans 6 feet wide.
“The sky is lit up with Christmas lights basically,” she told CBS News. “There’s lights and things flying all over. It reminded me of something from a movie.”

Report this ad
Sometimes eyewitnesses just see one drone.  In other cases, the drones are working in pairs.  And in other instances, there are large groups of up to 30 drones working in very close coordination.
On Thursday night, a Denver Post reporter went out in search of these drones, and it wasn’t long before some of them were spotted…

As light turned to dark Thursday, stars appeared in the night sky. And soon after, so did drones. Around 6:10 p.m., a Denver Post reporter and photographer spotted two unmanned aircraft whizzing west above I-70, 8 miles outside Limon.
More drones could be seen outside Last Chance, a slight whir audible as they passed overhead. The aircraft flashed one red light and one white. Two other yellowish lights remained on throughout the flight. In 20 minutes, a half-dozen flying objects could be seen traversing over the barren wind farms.

The fact that there are so many of them and that they are operating over such a large area would seem to indicate that this is not the work of some rogue individual.
But at this point we don’t have any answers.
Lincoln County Sheriff Tom Nestor has been working on this case for quite a few days, and his county map is now “dotted with blue and yellow thumbtacks”because so many people have been reporting sightings…

Inside the Lincoln County Sheriff’s Office in Hugo on Thursday afternoon, Sheriff Tom Nestor and Capt. Yowell stared at a county map hanging in a narrow hallway.
It’s dotted with blue and yellow thumbtacks, depicting sightings from across the county of just under 5,500 people. There’s a series of tacks clustered around Interstate 70 in Limon, with a few scattered north and south of the interstate. Some people reported the drones flying in packs. Others saw solo flights.

Nestor immediately suspected that a local company may be doing some mapping, but that theory didn’t turn up anything.  And other law enforcement officials in the region have come up empty as well…

Nestor said he has spoken to local oil companies and drone experts, learning information but getting no answers. Neighboring sheriffs have spoken to the military, which has denied involvement, he said. The Air Force, the Defense Advanced Research Projects Agency, the Department of Defense, the Environmental Protection Agency, the North American Aerospace Defense Command and the University of Colorado Boulder have told The Denver Post that they’re not flying the drones.

Report this ad
The FAA has gotten involved, and you would think that they should be able to get to the bottom of this, but they are just as puzzled as everyone else…

Already, the FAA has contacted test sites, drone companies and companies that have received authorization to operate drones in the affected areas. But the agency has not been able to determine who is flying the aircraft, spokesman Ian Gregor said in a statement Monday.
The FAA also asked area airports and pilots to report sightings or people they see operating the drones from the ground.

So far there is no evidence that these drones are malicious, but just a few days ago we received a reminder of how deadly they can potentially be.  Iranian military commander Qassem Soleimani was killed by a drone, and he probably never even knew that the attack was coming.
On Monday, dozens of federal, state and local law enforcement officials gathered in the town of Brush to talk about these drones.  At the conclusion of the meeting, reporters were told that there is still “no explanation” for this mystery…

Mysterious drone sightings remains a mystery on Colorado’s Eastern Plains. Monday, more than 70 local, state and federal officials met in Brush to talk about findings and reports from the last couple of weeks.
Multiple law enforcement agencies, the FBI, United States Air Force and the FAA ended the meeting with no explanation of what the objects hovering over vast properties really are.

People living in Colorado, Nebraska and Kansas desperately want some answers, and now a similar sighting has been reported in Minnesota…

Drones were reported flying over Juniata and Hastings Sunday night. An operator has not been identified at this time.
Minneapolis Air Traffic Control contacted the Hastings Police Department with a report from an airplane pilot about the drones.
Air traffic control reported the drones were flying in a grid pattern around 9-10 p.m. Sunday, Police Capt. Mike Doremus said.

This sounds very similar to many of the other sightings, but nobody has been able to examine one of these drones up close yet, and so we still don’t know precisely what we are dealing with.
Report this ad
But what we do know is that our world is a very strange place, and it is getting stranger by the day.
Hopefully this is just some relatively harmless top secret U.S. military program that the Pentagon doesn’t want to talk about.
Because if these drones do not have a U.S. origin, then that opens up a completely different can of worms.