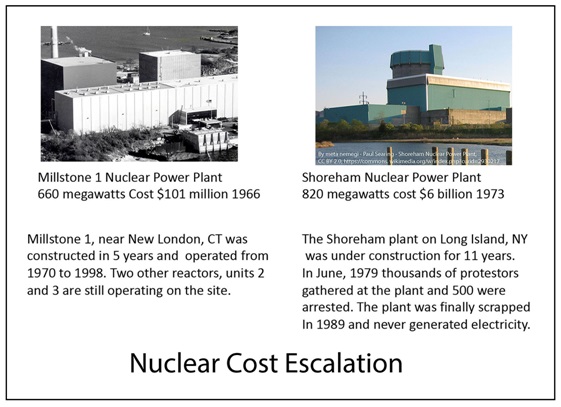 Source: Norman Rogers
The very wrong energy policy being pursued in the U.S. and even more so in Europe has its roots in a 1987 report from the United Nations. The report called Our Common Future is normally referred to as the Brundtland Report after Harlem Brundtland, a Norwegian Politician, and chairman of the committee that wrote the report. Mrs. Brundtland in the introduction to the report states that: “We became convinced that major changes were needed, both in attitudes and in the way our societies are organized.” Scandinavian reformers always believe that they are a model for the rest of the world. By 1987 Norway was already well on the way to becoming an extremely wealthy country due to its offshore oil fields. It’s not that surprising that Norwegians may perceive accidental geological wealth as proof of their moral superiority.  Nor is it surprising that the Norwegians opted not to preserve the oil for future generations. The failure of Scandinavian ideology is most evident in Sweden where massive third-world Moslem immigration has devastated the country. The Brundtland Report takes a dark view of the world and sees its dark view as a good reason to rearrange the world along Scandinavian lines.
The key finding of the Brundtland Report is this:
“Humanity has the ability to make development sustainable to ensure that it meets the needs of the present without compromising the ability of future generations to meet their own needs.”
This is the theory that mankind is raping the Earth, plundering its resources, spreading pollution, and overwhelming the Earth’s ability to support the population. This was and still is a theory embraced by those that don’t like things as they are and wish to turn society upside down in the hope that they will like what results better. Venezuela is a present-day example of what results.
The Brundtland Report is often considered to mark the beginning of the modern sustainability movement. The problem with sustainability is that empirically it is just wrong. A business school professor, Julian Simon, wrote the book: The Ultimate Resource 2. His theme is that human ingenuity is the ultimate resource. We don’t need to starve our economy by saving resources for future generations. Economic history shows conclusively that every resource scare is fixed by human ingenuity. Simon gives many examples. Good examples are energy shortages fixed by fracking or the impending famine fixed by genetic engineering in agriculture.
Simon put his money where his mouth was. In 1980 he made a celebrated bet with the prophet of famine and resource depletion, Stanford Professor Paul Ehrlich. He bet that over 10-years any depletable resources to be chosen by Ehrlich would cost less in real terms. Ehrlich took the bet and lost in every case. The items Ehrlich chose were copper, chromium, nickel, tin and tungsten.
Renewable energy is mostly applied to the generation of electricity. Electricity in the U.S. is generated by using coal, natural gas, nuclear energy and hydroelectricity. About 7% comes from wind and solar. Coal is well suited for generating electricity. We have vast resources and modern plants are nearly pollution free. But coal is being driven out of business by the Sierra Club that has a long running hysterical campaign against coal. Although they blame coal for every medical malady imaginable, the real reason the Sierra Club hates coal is that it emits carbon dioxide when burned and they believe that a great global warming disaster from CO2 is looming. Natural gas is gradually displacing coal because fracking has made it cheap and the plants are cheap to build. Natural gas can be burned very efficiently and cleanly in combined cycle plants based on gas turbines.  But the Sierra Club does not like natural gas either, even though the natural gas industry gave them millions in the hope of hurting its competitor, coal.
Nuclear electricity does not emit CO2 or noxious substances. The fuel is extremely cheap, costing much less than already cheap natural gas. But, in the U.S. the nuclear industry has been driven to the wall by attacks from the environmental movement. Essentially, they have destroyed the industry with legal and political attacks, making it impossible to build new plants. Nuclear is prospering in Asia where they are short of indigenous fuel supplies. The environmental attacks are based on exaggerating controllable hazards such as radiation, bomb making and nuclear waste disposal.

The promoters of renewable electricity advocate wind and solar electricity. There are other types of recognized renewable electricity but those are niche resources and are not scalable. Hydroelectricity is generally banned because the advocates of renewable electricity don’t like dams. Wind and solar are scalable and you can have as much as you are willing to pay for.
Many states have established mandatory goals for what percentage of their electricity should be renewable. The leaders in what is a bizarre pursuit and the percentage of electricity expected to be renewable by 2030 are New York -70%, California -60%, and Nevada, Maryland and New Jersey, each at 50%. The catch is that it is easy to insert 5% or 10% wind or solar into the electric grid. The existing natural gas plants can compensate for the erratic and intermittent nature of wind or solar. The technical bottom line is that when the wind or solar starts being a bigger part of the grid, say 15% for solar and somewhat higher for wind, you run into difficulties. Solar and wind surge. For example, midday solar may be 5 times as large as the average solar energy. For wind the surge may be 3 times larger than the average wind energy. If the surge production exceeds some threshold it has to be curtailed for grid stability reasons. The bottom line is that to achieve 50% renewable electricity, electricity storage has to be added to the system to smooth out the surges. The only remotely practically technologies for storage are pumped storage, a closed loop hydroelectric system, or batteries. These are very expensive, and you end up with renewable electricity costing $200 per megawatt hour compared to running existing natural gas plants for $20 per megawatt hour. It’s ridiculous and pointless. Wind and solar, by the way, are extremely expensive methods of reducing CO2 emissions compared to the alternatives.
Much of the waste and futility of renewable electricity is masked by federal subsidies amounting to about 75% of the cost of the plants. However, it seems that congress is losing its appetite to subsidize useless energy. The current subsidies are scheduled to decline and so far, congress is deaf to industry begging for a continuation of generous subsidies.