COVID19 UPDATES - POLICE STATE AROUND THE CORNER #CORONAVIRUS plus MORE

Other shocking videos show panic-buying in Hawaii as well 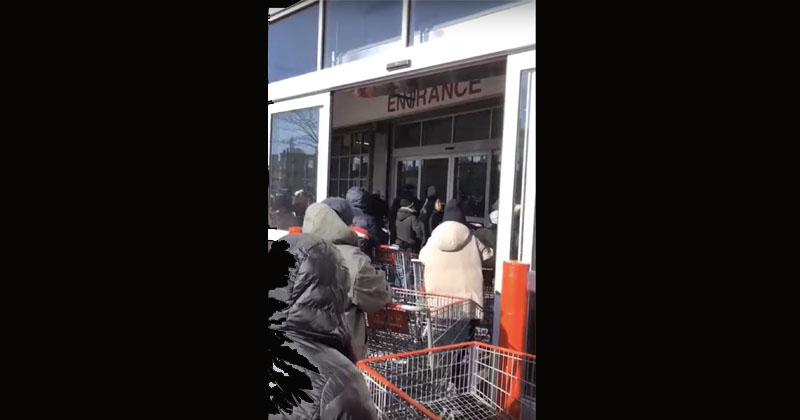 Source: Zero Hedge
The same long lines that we’ve seen in China, Japan, South Korea, and across the world as people panic buy food and health supplies have started in the US.
On Saturday, the US Surgeon General urged people to “stop buying masks,” saying on Twitter that they’re not effective in preventing the general public from catching coronavirus.

Despite the CDC telling everyone to calm down, alleged video of long lines pouring out of a Costco store in Brooklyn, New York, surfaced on YouTube Saturday afternoon.

ANOTHER person has died in Washington state from the coronavirus, health officials said Sunday night.
The death marks the second person who has died in the U.S. because of the virus — both of whom have been in the Evergreen State. 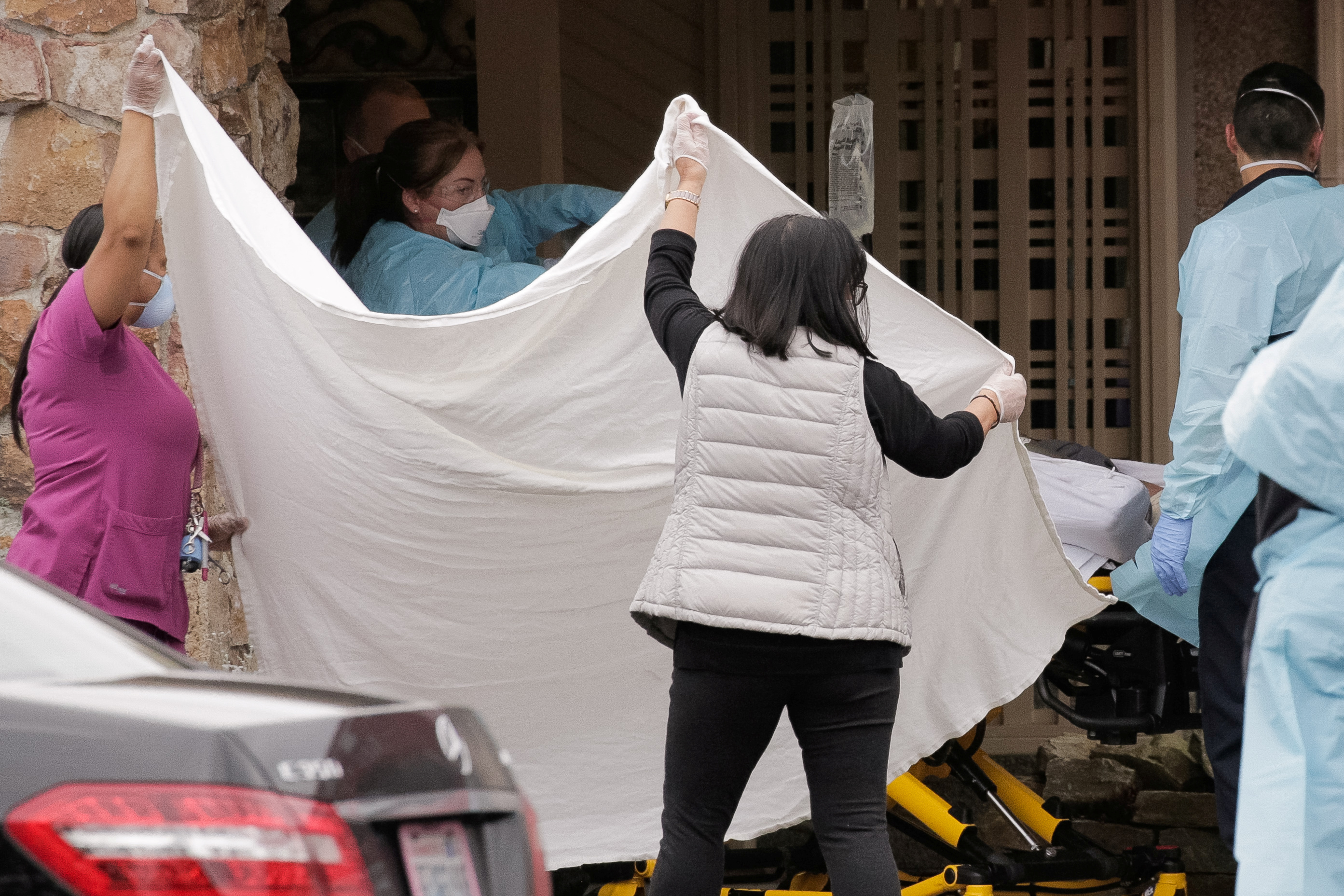 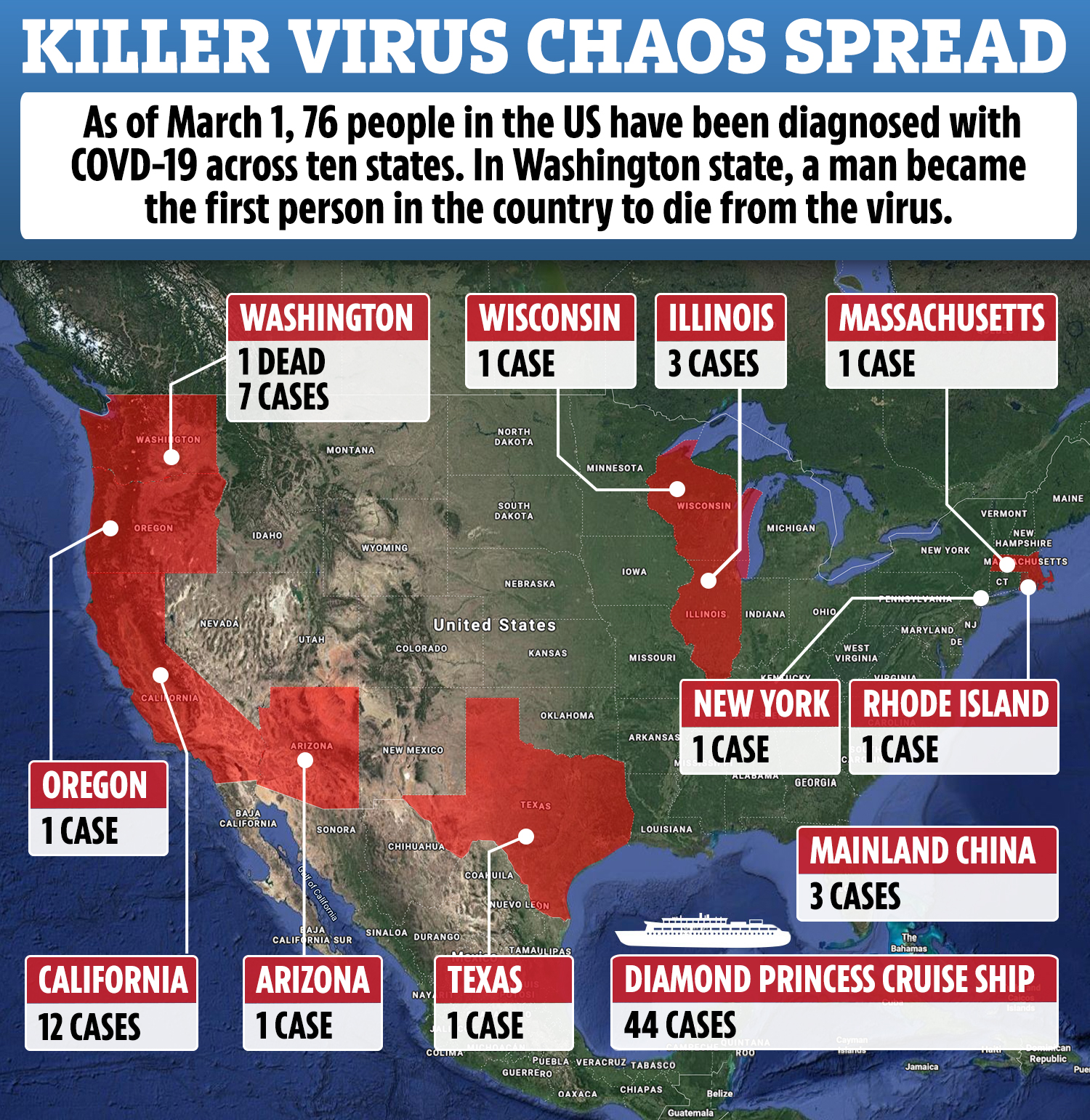 King County officials said the man was in his 70s and had underlying health conditions. He died at EvergreenHealth Medical Center, where the first person also died.

On Saturday, it was announced a man in his 50s from the Seattle area, who also had underlying health conditions, had died from the illness.

A short time earlier, it was revealed a person in New York was confirmed to have the coronavirus after traveling to Iran in recent weeks.

That person, located in Manhattan, is in isolation at home. Gov. Andrew Cuomo says there’s “no reason for undue anxiety” because of the diagnosis.

“The general risk remains low in New York,” he said. “There is no cause for surprise — this was expected.”

Rhode Island announced a man in his 40s and a teenager, who had traveled to Italy together as part of a school trip, both have the coronavirus.

A third person with mild symptoms, a woman in her 30s who also went on the trip, is being tested.

Washington Gov. Jay Inslee declared a state of emergency because of the outbreak, directing agencies to use “all resources necessary” to prepare and respond.

There are at least 87 confirmed cases of the coronavirus throughout the U.S.

Researchers believe the virus could have been circulating for weeks undetected in Washington state — where the nation’s first confirmed infection was.

The first case was a Washington state man who had visited China — the epicenter of the outbreak.

But multiple people who have been recently diagnosed had not traveled to outbreak countries or been in contact with anyone confirmed to have the virus.

At the Life Care Center in Kirkland, a suburb of Seattle, 50 people who showed symptoms of the virus were being tested as of Saturday. 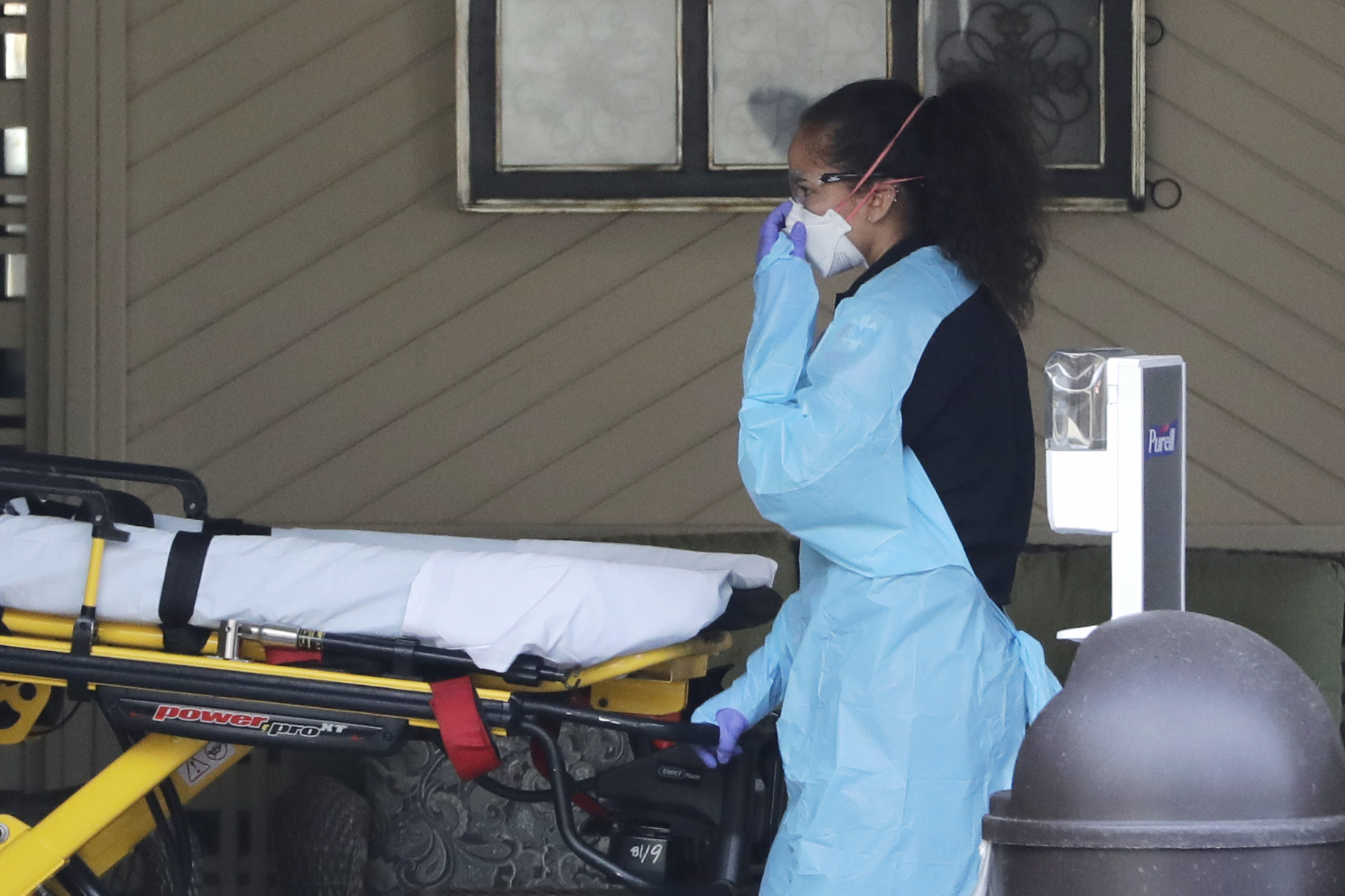 The nursing home is just two miles away from EvergreenHealth Medical Center — where both coronavirus deaths have happened.

Dr. Frank Riedo, medical director of Infection Control at the center, said: “This is just the tip of the iceberg.”

Health officials said two more people in the area, both men in their 60s, were diagnosed and in critical condition.

Two healthcare workers at NorthBay VacaValley Hospital in Vacaville, California were also diagnosed after caring for an earlier coronavirus patient.

Researchers at the Fred Hutchinson Cancer Research Center and the University of Washington on Sunday said they had evidence the virus might have been circulating for up to six weeks in Washington.

If true, that could mean hundreds of people have undiagnosed cases in the area.

Trevor Bedford, of the Fred Hutchinson center, tweeted that genetic similarities between the state’s first case on January 20 and a case announced on Friday showed the newer case might have descended from the earlier one.

“I believe we’re facing an already substantial outbreak in Washington State that was not detected until now due to narrow case definition requiring direct travel to China,” he wrote on Twitter.

Other scientists said those findings don’t really surprise them and said for many people, the symptoms aren’t much worse than a flu or a bad cold.

“We think that this has a pretty high rate of mild symptoms and can be asymptomatic,” said Justin Lessler, an associate professor of epidemiology at the Johns Hopkins Bloomberg School of Public Health.

“The symptoms are pretty non-specific and testing criteria has been pretty strict, so those combinations of factors means that it easily could have been circulating for a bit without us knowing.”

Dr. Carlos del Rio of Emory University School of Medicine said: “This is a good time to reinforce the things we all should be doing to stop the spread of flu.”

“Wash your hands. Don’t touch your face. If you have a cold, stay home … It’s a good time to remind ourselves of that.”

Vice President Mike Pence, who’s leading the government’s response to the outbreak, said more than 15,000 virus testing kits had been released over the weekend.

He said the Trump administration is working with a commercial provider to distribute 50,000 more.

Pence said testing was among the first issues raised by governors he’s spoken with so far, and said Washington state, Oregon and Illinois have started their own testing.

Cuomo said on Twitter Sunday that New York state was also granted the ability to do their own testing after he spoke with Pence.

After the first death was announced, President Donald Trump downplayed the virus threat and urged people not to panic.

“We have 22 patients in the U.S. that have coronavirus,” Trump said, confirming a “high-risk” patient passed away overnight — but officials said he had not traveled before his death.”

“Healthy people, if you’re healthy … you will probably go through and process and you’ll be fine,” the president said.

He described his January decision to prevent travel as the most “aggressive action in modern history” to contain a virus like this.

Trump said these travel restrictions on people traveling to and from China were a “lifesaver.”

There are now more than 80,000 cases of the coronavirus worldwide, and about 3,000 deaths.

Posted on March 2, 2020 by The Extinction Protocol

The Cassandra Complex: In the science fiction film, 12 Monkeys, time-traveler James Cole warned a group of doctors that a outbreak of deadly virus would kill billions in the year 1997, but they thought he was crazy. Global deaths are now: 3,038

Europe: New coronavirus infections spiked dramatically across Europe on Sunday, with Italy reporting hundreds of new cases and five more deaths. The number of confirmed cases also jumped in France, Germany and the UK, and the Czech Republic reported its first case. As the disease continued its rapid spread and governments introduced emergency measures to halt the progress of the escalating epidemic, outbreaks worsened in Iran and South Korea. The US also reported two new infections, one in Chicago and another in Rhode Island, marking the eastern state’s first case.
Italy said confirmed infections had risen 40% in 24 hours to 1,576, with the death toll now at 34. In Germany the number of people infected had almost doubled to 129 on Sunday, while France’s total stood at 100 – up from 38 on Friday – nine of them in a serious condition. Iran meanwhile raised its death toll from 43 to 54 as its number of confirmed infections rose by more than half to 978, amid continuing concerns that official figures still do not reflect the full scale of the outbreak there. –The Guardian

Iran: The outbreak of the new coronavirus is spreading across Iran with the number of infectious cases approaching 1,000. Iran’s health ministry announced on Sunday that the number of patients surged by 385 in one day to 978. Fatalities also increased by 11 to 54, the highest number outside China. Iran’s state-run news agency says coronavirus infections have been reported in 27 out of the country’s 31 provinces. It says 350 people have been infected in the hardest-hit province of Tehran, including the capital. That’s the largest number of cases in the country and more than one-third of its overall figure. The Iranian government has ordered the cancellation of large-scale Friday services at mosques across the country. Iran’s health minister Saeed Namaki on Sunday called on the people not to hold mass gatherings or go out unless absolutely necessary. –NHK

The tip of the iceberg: A “boom” of confirmed cases of the coronavirus that has killed almost 3,000 people around the world could already be racing across the U.S. despite ramped-up efforts to contain the outbreak, experts say. The spread of the virus by “community transmissions is an indication that we could indeed be looking at the tip of the iceberg,” Ogbonnaya Omenka, an assistant professor and public health specialist at Butler University’s College of Pharmacy and Health Sciences, told USA TODAY on Sunday. Though fewer than 80 U.S. cases have been confirmed thus far, including a handful in Washington state, a researcher there estimates that “a few hundred” people in the state could actually be infected.
Bedford studied two cases that were confirmed weeks apart and determined they were linked through community transmission – from a source not directly connected to another known case. Bedford tweeted his belief that the virus has been spreading undetected, at least in Washington state, for six weeks. Omenka says that doesn’t bode well for efforts to contain the virus nationwide. One of the chief challenges with dealing with community transmission is contact tracing, which may prove difficult because of constant human movements and interactions, Omenka said.

“There are some enormous implications here,” Trevor Bedford, a researcher at the Fred Hutchinson Cancer Research Center in Seattle, posted on Twitter. “I believe we’re facing an already substantial outbreak in Washington State that was not detected until now. Nevertheless, the possibility of a wider spread of the COVID-19 in the U.S. is very likely now, based on recent developments,” he said. –USA Today