#QTard Drama Theater - Shutdown: It’s Time to Unveil the True Enemy of the People plus more

Shutdown: It’s Time to Unveil the True Enemy of the People


Locking down the US over a virus that has killed 69 Americans in the same amount of time that the common flu has killed 19,000+ does not jibe. It seems obvious that a fear of the biological impact of Covid-19 cannot be the true motivation for the worldwide shutdown we’re witnessing in all the economies of consequence. It is the consequences of the shutdown that are fearsome.

Dave from the X22 Report is offering the optimistic point of view of hardcore Q followers, that this lockdown is a cover for the arrest members of the Deep State, while minimizing collateral damage to the populace.
Nearly 300 arrests were just made in Saudi Arabia, including members of the royal family. Q evangelist, Praying Medic believes this is a proof of Q Post 88, which describes the order of Deep State takedowns.
Dave says, of this post, “Why is this relevant? Saudi Arabia first (1) then the US (2) then Asia (3) then the EU (4).
“We are witnessing The Storm right now. During the storm, how do you protect the people? How do you track those who are going to be arrested? And how do you protect the public from false flags during mass arrests?
“You minimize the exposure. You keep public gatherings to a minimum. You close down the Deep State targets. We’re counting down, right now.”
Dave then refers to a Twitter thread from last Sunday by Australian Q follower, Dr. Russell McGregor:
“I took a portion of his Twitter thread, of how this could play out. Now, I’m not saying this is exactly how it’s going to play out. I have different opinions on what Dr. Russell McGregor wrote but let me begin…
***
1) Attention, Patriots. My FINAL analysis of how #TheStorm will unfold.
2) I shall put together all the Q puzzle pieces.
In doing so, I will take my best guess – as to how the IDEAL US Military strategy MIGHT be structured to complete #TheStorm.
3) I am willing to take the heat if my guesses do not largely eventuate.
4) Let’s start with the virus. SARS-CoV-2 is a Psyop.
It is a real virus but causes little morbidity and mortality. Thus, it is benign overall, and less of a concern WW than influenza.
5) The virus can be problematic but only in those with serious co-morbid disease – almost exclusively the elderly.
Having said this – preventative measures SHOULD be undertaken until #POTUS gives the all clear.
Antivirals, such as Remdesivir, will be useful in ICU treatment.
6) The virus was engineered by the Deep State at the University of North Carolina, Fort Detrick and Geelong

.
It however has been attenuated/neutralised by White Hats.
Two of the four HIV inserts have had base pair additions to ameliorate the ‘gain of function’.
7) China, Iran and Italy are all on side with #POTUS.
They have largely manufactured the crisis by controlling the release of Psyop disinformation.
Remember Italy was involved in #Spygate and needed to make amends.
8) Most deaths will have had intercurrent influenza.
Hence, conservative influenza prevention/treatment is important.
China released the virus at the designated time.
The purpose was to create PANIC as cover for operations.
9) Quarantines will be staggered throughout major cities of the world.
For instance #Sydney is likely to start this Wednesday 18th March 2020.
10) The MSM is hoping the virus is very deadly and will end #POTUS politically.
It is not and it will not.
They will ramp up the PANIC because they have no other choice.
They are under the impression the virus is in its original Deep State form.
11) During these quarantine periods WW there will be silent simultaneous arrests of evil low level Deep State facilitators.
These include MS-13 in

, and Canberra Raiders supporters in

.
The level of action will be entirely inappropriate for the actual risk posed.
12) These nasty individuals will be put in Quarantine Camps run by the WW white hat Military.
An example are the American locations here: 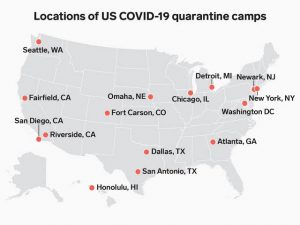 13) We will not hear too much of these arrests – although some have already subtly been announced.
So no dramatic arrests of these nasty individuals.
Silence is strategically the best option.
14) The WW city quarantines will continue from the staggered individual commencements until they all end on 10th April (Easter Friday).

Superimposed upon this will be 10 days of darkness which will begin on 1st April (morning) and end on 10th April 2020 as well.
15) Immediately before the start of darkness #POTUS will tweet “My fellow Americans … the Storm is upon us ……”
April Fools Day will lessen the initial worries about darkness occurring.
When darkness occurs there will be peak COVID-19 panic and Medical Martial Law WW.
The worldwide city quarantines will continue from the staggered individual commencements until they all end the 10th of April Easter Friday.
16) Indeed Quarantine/Medical Martial Law will have been in place in most major cities for some time before 1st April, 2020.
Many people will be self-isolating at home.
Most will have already prepped for food etc.
17) In

the unemployed/pensioners will be given $750 on 31st March, 2020.
Other countries will have contingencies too.
This means few will starve.
Some emergency shops will be open to provide supplies if needed but generally most shops will be closed.
18) The 10 Days of Darkness will involve no social media or internet.
[Dave comment: I do believe internet will be up but we’re already getting word that social media certain video certain people that have Twitter, those channels might be shut down].
There will be electricity but no TV or radio.
No newspapers will print.
The Military of each country will close these down.
19) #POTUS will have the ONLY available method of reaching the public WW throughout the 10 Days of Darkness and that will be through the Emergency Broadcast System.
Each Military WW will transmit this to TV’s and devices in their respective country.
20) #POTUS will be either abroad or on AF1 during the Days of Darkness for optics.
Ostensibly, the excuse for the use of AF1 will be safety and/or infection risk.
The EBS will be transmitted from AF1.
There will effectively be a total news blackout except for #POTUS.
***
Dave says, “Now, this goes on with other things but I wanted to talk about what is going to happen. Now, I do believe that this is about removing the power structure of the Deep State.
“Trump, he came out and you can see on his Twitter account, there’s going to be 15 days of self-quarantine. He wants everyone to be in a group of 10 or less people and people to stay in their homes and don’t travel. There’s going to be no school. There’s gonna be no businesses open and it seems that they are prepping for what is coming.
“Now, Trump tweeted this out, ‘I ask all Americans to band together and support your neighbors by not hoarding unnecessary amounts of food and essentials. Together, we will stay strong and overcome this challenge.'”
The current quarantine map matches the states with sealed indictments. Dave believes that TV, radio and social media might be shut down but not the entire Internet during these “Ten days of darkness”, during which time there will be mass arrests, removing the power structure of the Deep State.
Dave says, “What is the power structure of the Deep State? Certain operatives, gangs paid, mercenary forces that carry out [false flag] events.” He believes they will take out the lower level operatives first, to remove protection from the top-level arrests.
“The second phase of the storm is the investigations of those who are in charge. Those who are calling the shots…
“The arrests of Hillary Clinton, Hunter Biden, Joe Biden, Obama, Brandon, Comey – everyone that we’ve been hearing about for a very long time, these will be made public once the investigations are complete. Durham is wrapping up his investigation in this summer.
“Remember, Q has told us it’s going to be a hot spring and summer…
‘Now, do I believe in this next phase we will have suicide weekends. Do I believe that people will run? Yes but Trump the Patriots, they’re going to play the Trump card; these are the investigations, these are the indictments against these individuals and I believe Trump the Patriots, they want to make this public so the people see it happen.
“What we’re watching now is the silent arrests; of removing their power structure and I believe the public arrests those will be coming very, very soon once this operation is complete because we know the investigations are wrapping up and this is why Q has told us it’s going to be a hot spring and summer.”