https://www.theguardian.com/environment/2020/apr/06/bad-news-radiation-spikes-16-times-above-normal-after-forest-fire-near-chernobyl
The blaze started on Saturday close to the site of the world’s worst ever nuclear disaster 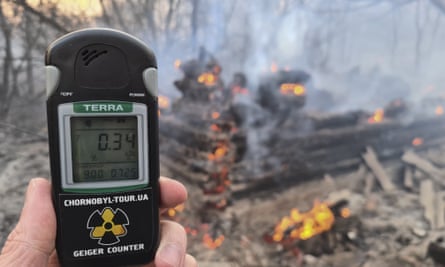 Ukrainian officials have sought calm after forest fires in the restricted zone around Chernobyl, scene of the world’s worst nuclear accident, led to a rise in radiation levels.
Firefighters said they had managed to put out the smaller of two forest fires that began at the weekend, apparently after someone began a grass fire, and had deployed more than 100 firefighters backed by planes and helicopters to extinguish the remaining blaze.
The fire had caused radiation fears in Kyiv, Ukraine’s capital, which is located about 60 miles south of the Chernobyl exclusion zone. Government specialists on Monday sent to monitor the situation reported that there was no rise in radiation levels in Kyiv or the city suburbs. 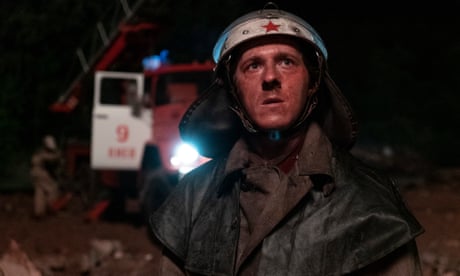 ‘A horrible way to die’: how Chernobyl recreated a nuclear meltdown
Read more
“You don’t have to be afraid of opening your windows and airing out your home during the quarantine,” wrote Yegor Firsov, head of Ukraine’s state ecological inspection service, in a Facebook post about the results of the radiation tests.
As of Monday afternoon, the country’s emergency ministry said that the remaining fire in the Chernobyl Exclusion Zone covered about 20 hectares and was still being extinguished. Footage released by the ministry showed firefighters dousing flames on the forest floor, and clouds of smoke rising.
Police have arrested a suspect believed to have caused the blaze, a 27-year-old man from the area who reportedly told police he had set grass and rubbish on fire in three places “for fun”. After he had lit the fires, he said, the wind had picked up and he had been unable to extinguish them.
An earlier post by Firsov had warned about heightened radiation levels at the site, which he said had been caused by the “barbaric” practice of local grass fires often started in the spring and autumn. “There is bad news – radiation is above normal in the fire’s centre,” Firsov wrote on Sunday.
The post included a video with a Geiger counter showing radiation at 16 times above normal. The fire had spread to about 100 hectares of forest, Firsov wrote. 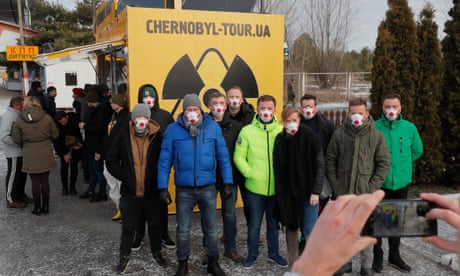 Tourists flock to Chernobyl – in pictures
Read more
The country’s emergency ministry put out a warning for Kyiv on Monday about poor air quality but said it was related to meteorological conditions, and not to the fire.
The service had said on Saturday that increased radiation in some areas had led to “difficulties” in fighting the fire, while stressing that people living nearby were not in danger. On Monday, it said that gamma radiation levels had not risen near the fire.
Chernobyl polluted a large area of Europe when its fourth reactor exploded in April 1986, with the region immediately around the power plant the worst affected. People are not allowed to live within 30km of the power station.
The three other reactors at Chernobyl continued to generate electricity until the power station finally closed in 2000. A giant protective dome was put in place over the fourth reactor in 2016.
Fires are common in the forests near the disused power plant.