OUT OF MIND » TRUTH IN CONSPIRACY THEORIES? » CONSPIRACY & FALSE FLAG EVENTS: PAST & PRESENT » Lindsey Graham On Kim Jong Un: ‘I Pretty Well Believe He Is Dead Or Incapacitated’

Lindsey Graham On Kim Jong Un: ‘I Pretty Well Believe He Is Dead Or Incapacitated’ 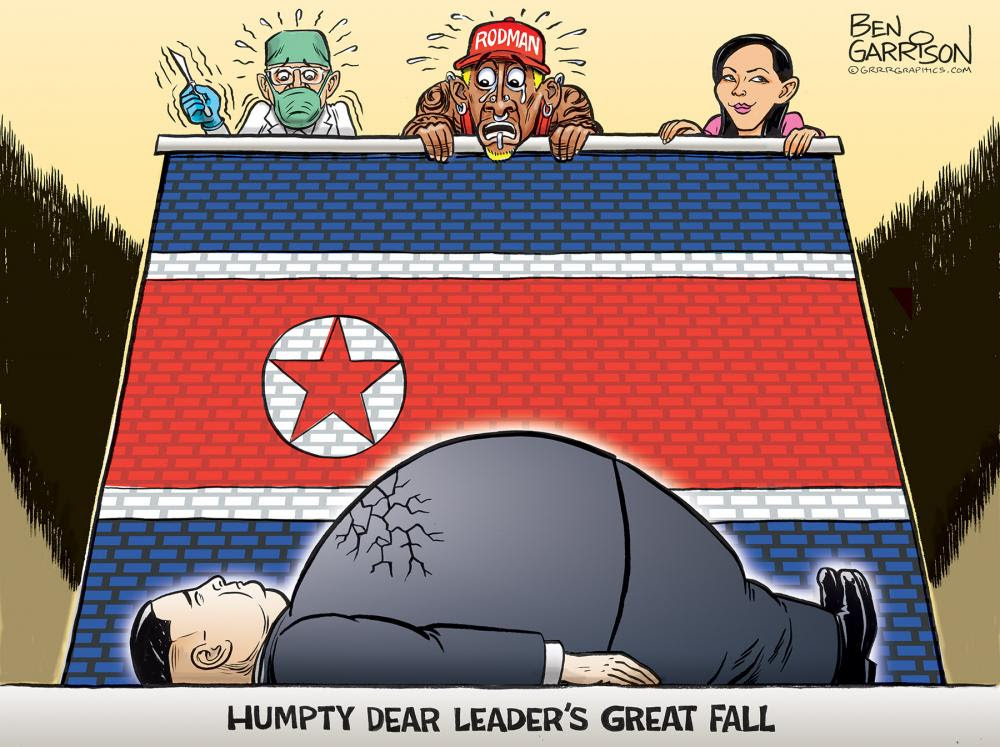 Source: Eric A. Blair
Sen. Lindsey Graham thinks North Korean dictator Kim Jong Un is dead or incapacitated.
Advertisement – story continues below
“Well, it’s a closed society, I don’t know anything directly,” Graham said Saturday night on Fox News. “But I’d be shocked if he’s not dead or in some incapacitated state because you don’t let rumors like this go forever or go unanswered in a closed society, which is really a cult, not a country, called North Korea.”
Reports have emerged that Kim, 36, who has served as leader for the secretive country since 2012, suffered a serious health crisis last week.
“So I pretty well believe he is dead or incapacitated,” Graham said. “And I hope the long-suffering North Korean people will get some relief if he is dead, and President Trump’s willing to do business with North Korea in a win-win fashion. So, if this guy is dead, I hope the next person who takes over will work with President Trump to make North Korea a better place for everybody.”
TRENDING: Salon Owner Shelley Luther RIPS UP CITATION at Dallas Rally After She Breaks Quarantine and Opens her Business (VIDEO)
Graham’s comments came after a Japanese magazine reported that Kim is in a vegetative state after falling gravely ill following heart surgery.
According to Shukan Gendai, Kim visited a rural area earlier this month and collapsed. He reportedly underwent a stent procedure to which inserts a tube into his heart to keep blood flowing free.
Advertisement – story continues below
CNN last week cited sources that said they believed that Kim was in serious condition following a medical procedure.

The US is monitoring intelligence that suggests North Korea’s leader, Kim Jong Un, is in grave danger after undergoing a previous surgery, according to a US official with direct knowledge.
A second source familiar with the intelligence told CNN that the US has been closely monitoring reports on Kim’s health.
Kim recently missed the celebration of his grandfather’s birthday on April 15, which raised speculation about his well-being. He had been seen four days before that at a government meeting.
Another US official told CNN Monday that the concerns about Kim’s health are credible but the severity is hard to assess.

Trump was asked last week if Kim was gravely ill.
“Well, these are reports that came out, and we don’t know,” Trump said. “We don’t know. I’ve had a very good relationship with him. I can only say this: I wish him well, because if he is in the kind of condition that the reports say, that the news is saying, that’s a very serious condition.”
“But I wish him well. We’ve had a good relationship. I’ve said it,” Trump said. “I’ve said it many times: If somebody else were in this position, we would have been right now at war with North Korea. And we are not at war. We are nowhere close to war with North Korea. I just have to say to Kim Jong Un, I wish him very good luck. Good luck. They came out with a very serious medical reports.”

OUT OF MIND » TRUTH IN CONSPIRACY THEORIES? » CONSPIRACY & FALSE FLAG EVENTS: PAST & PRESENT » Lindsey Graham On Kim Jong Un: ‘I Pretty Well Believe He Is Dead Or Incapacitated’