By Derrick Broze
A new study highlights why a growing number of parents are skeptical about the safety of the coming COVID-19 vaccine, and vaccines in general.
In recent months the mainstream corporate media has begun telegraphing their intent to divide the American population between those who believe in bodily autonomy and health freedom, and those who support government mandated vaccinations. This divide is apparently beginning to widen as the reality of a rushed vaccine for COVID-19 draws near.
Despite the continued attacks on anyone who questions or challenges the assumed safety of vaccines, evidence continues to emerge that vaccines are not safe for all people, in all situations. In a groundbreaking new study published in The Lancet on July 6, researchers call for updating the vaccine paradigm. In the study, Vaccinology: time to change the paradigm?, researchers write:

The existing vaccine paradigm assumes that vaccines only protect against the target infection, that effective vaccines reduce mortality corresponding to the target infection’s share of total mortality, and that the effects of vaccines are similar for males and females. However, epidemiological vaccine research has generated observations that contradict these assumptions and suggest that vaccines have important non-specific effects on overall health in populations.

The researchers go on to discuss contradictions within the existing vaccine research and propose six emerging principles they believe might explain the contradictions. While it’s important to note that, overall, the paper details the benefits of vaccines — including a decrease in mortality — the most controversial aspects of the paper deals with the non-specific effects (NSE) of vaccines. Some of the non-specific effects (NSE) include “increased all-cause mortality in females.” All-cause mortality is generally defined as “all of the deaths that occur in a population, regardless of the cause.” It is measured in clinical trials and used as an indicator of the safety or hazard of an intervention.
The researchers start by outlining various assumptions within vaccine research, noting apparent contradictions to these assumptions, and then proposing a new paradigm to resolve the contradictions. For example, they write, “because of the beneficial effects of standard measles vaccine, expectations were high when a live high-titre (concentration) measles vaccine was introduced and administered to children aged 4–5 months in Africa in the 1980s.” Despite the vaccine protecting against measles, they note that long-term follow-up Random Control Trials (RCTs) in Guinea-Bissau, Senegal, and The Gambia showed that girls who received the vaccine at 4–5 months of age, had two-times higher all-cause mortality than girls in the control group who received the standard measles vaccine at 9–10 months of age.
The researchers also acknowledged that in 1992, when the results were replicated in Haiti, the World Health Organization withdrew the vaccine. “This contradicted the idea that all protective vaccines have beneficial effects and that the effects are similar for boys and girls,” the study states.
The researchers also found that “non-live vaccines DTP (diphtheria, tetanus, and pertussis) vaccine, pentavalent vaccine, hepatitis B vaccine, IPV (inactivated polio vaccine), influenza H1N1 vaccine, and RTS,S malaria vaccine are associated with increased overall all-cause mortality in girls over at least 6 months or until the next vaccine is given.”  They call this finding contradiction 8 and 9, respectively, and propose Principle 2: non-live vaccines enhance susceptibility towards unrelated infections for females.
Disturbingly, the study found that there was no excess mortality in girls in the pre-vaccination era in west Africa. “Hence, the higher mortality is unusual, and contradicts the assumption that vaccines benefit boys and girls similarly,” they write.
Other important findings include the following:
– The sequence in which vaccines are given, and the combination of vaccines, does indeed impact overall mortality. “in all studies exploring this, the incidence of all-cause mortality increases if the DTP vaccine is administered after the measles vaccine compared with inverse order”
–  In Denmark, receiving the DTaP-IPV-H influenzae b vaccine with the measles, mumps, and rubella vaccine was associated with increased risk of hospital admission for respiratory infections compared with when the measles, mumps, and rubella vaccine was administered alone
–  In the USA, receiving live vaccines together with non-live vaccines was associated with higher risk of hospital admission for non-targeted infections than having a live vaccine only. Thus, the sequence and combination of vaccines might greatly affect child survival
– non-live vaccines enhance susceptibility to unrelated infections in girls. This principle would explain the negative effects of the non-live vaccines on girls reported for DTP, IPV, HBV, pentavalent vaccine, H1N1 influenza, and RTS
The researchers also acknowledge that the findings of their study are “obviously controversial,” yet currently, “no study without survival bias has contradicted this pattern.” While they point out that non-specific effects exist and are “very important,” they note that there have been few attempts to investigate non-specific effects of vaccines. 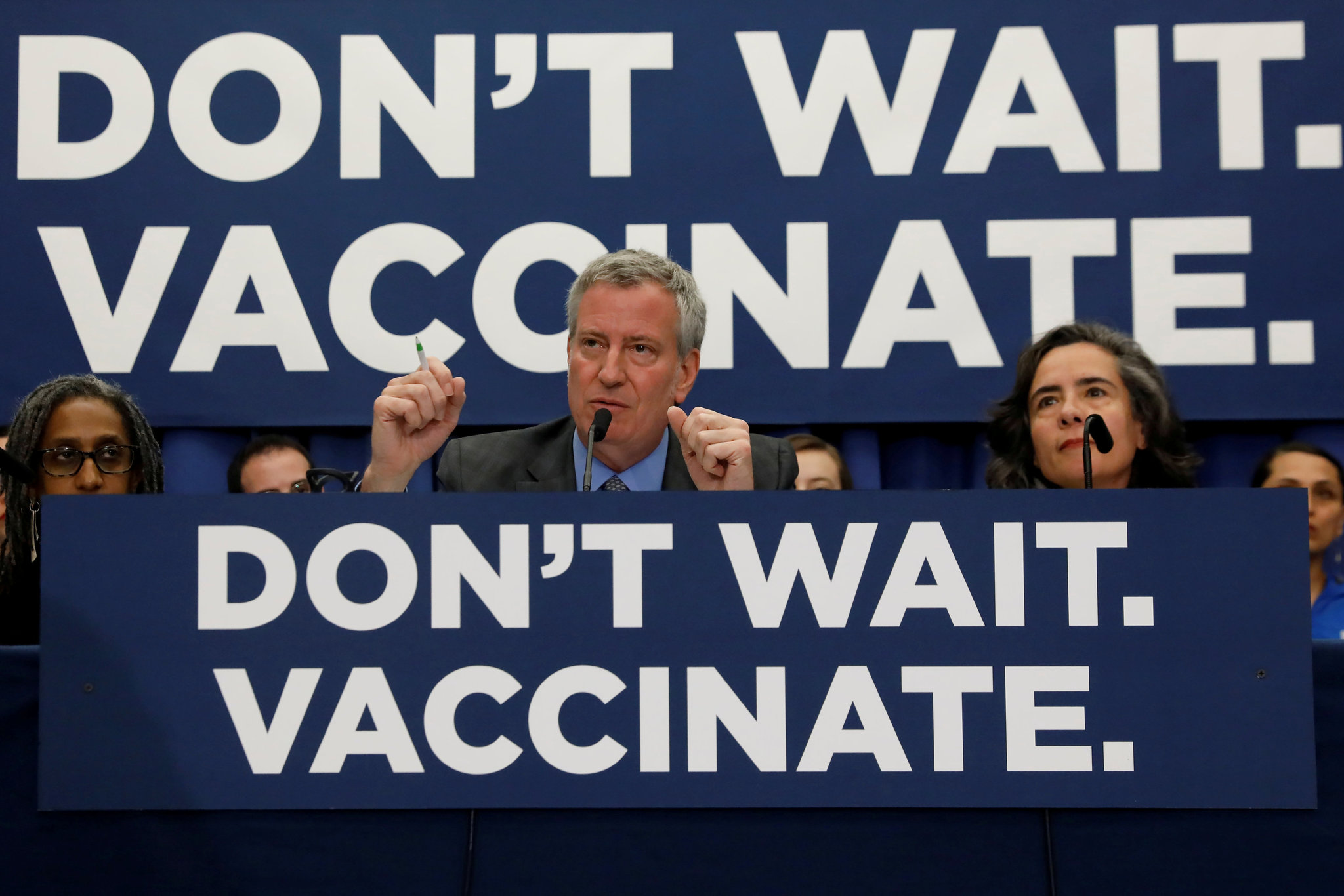 Of course, TLAV readers are well aware of the reasons these NSEs are not investigated. There are many powerful individuals and corporations who benefit from keeping the public in the dark about any dangers posed by vaccines. One need not be an opponent of all vaccines to recognize that some vaccines do pose a health risk to some portions of the population. Unfortunately, there are some who are so deeply entrenched in promoting vaccines they dare not report on the dangers.
For example, after the publication of the Lancet study, the American Council on Science and Health (“promoting science and debunking junk since 1978”) ran a piece titled, Vaccines Change Susceptibility To Unrelated Diseases, Sometimes For The Worse, detailing the results of the study. Unfortunately, the writer appears more concerned with the vaccine skeptic community using the study as fuel for their arguments than clearly outlining the implications of the study.
“The danger that this paper poses is obvious: It will serve as ammunition for anti-vaxxers who claim that vaccines and the CDC’s recommended vaccine schedule aren’t safe,” he writes. “But that would be a fatal mistake. At the present time, the safest conclusion is that the risks of target diseases are far greater than the risks posed by their respective vaccines.”
He goes on to downplay the concerns of the study because “these studies looked mostly at children from poor countries.” Eventually, he concedes that, “if some vaccines can help protect against unrelated diseases, could they also make people more susceptible to unrelated diseases? Unfortunately, the answer to that is probably “yes,” too.” Of course, he is quick to remind the reader, “Don’t let anti-vaxxers and those who have nefarious purposes hijack it.”

Of course, the ASCH does not acknowledge that they have received funding from such reputable organizations as Monsanto, Syngenta, Chevron, Coca Cola, Bayer, and other chemical companies.
The truth is that ASCH is playing their role in the ongoing “vaccine information war”. As TLAV reported in May, the New York Times published an opinion piece titled,  Get Ready for a Vaccine Information War, which outlines how “social media is already filling up with misinformation about a Covid-19 vaccine, months or years before one even exists.” I noted at the time, “the writer (and his editor) seem more concerned with scoring points against the vaccine skeptics rather than investigating whether fast-tracking vaccines is the best path forward.”
More recently, Bloomberg has jumped into the “vaccine information war” with the publication of a piece entitled, The Fight Over a Coronavirus Vaccine Will Get Ugly. In this piece, Bloomberg Opinion writer Andreas Kluth discusses the various fears around the COVID19 vaccine. Kluth mentions concerns regarding whether there will be enough vaccines for everyone, and fears that poorer nations might be left out as developed nations rush to get the vaccine to their citizenry. Finally, Kluth gets to the whole point of his article – bash those who question the safety of a rushed vaccine with ties to shady characters.
Kluth writes:

If these dilemmas are political dynamite, they may end up looking trivial next to what’s sure to be the biggest showdown: the standoff between scientific rationality and conspiracy theories. Early in the pandemic, there were hopes that the balderdash of anti-vaxxers would become untenable and their movement would atrophy. Instead, it’s booming.’

Kluth goes on to lament that “conspiracy theories” about vaccines have led to a decrease in measles vaccines and wonders if the same will happen with the COVID19 vaccine. “Above all, educating people to distinguish facts from fake news is effective only before they become exposed to, and infected by, conspiracy theories. We have to win the struggle against disinformation this year, or lose the fight against Covid-19 in 2021,” Kluth concludes.
Kluth is correct when he notes that recent polls suggest as many 50% of Americans say they will not get vaccinated COVID19.
Aside from the fears resulting from a rushed vaccine, there are many other reasons Americans oppose mandatory vaccinations. Some of these fears have been confirmed by the new Lancet study. This information is extremely valuable at present because the Trump administration’s Operation Warp Speed is in the process of rushing a new vaccine out to the people and there is a growing expectation that the vaccine will be mandatory, or at the very least, required to work, travel, go to school, and generally, operate within society.

Question Everything, Come To Your Own Conclusions.

Derrick Broze, a staff writer for The Last American Vagabond, is a journalist, author, public speaker, and activist. He is the co-host of Free Thinker Radio on 90.1 Houston, as well as the founder of The Conscious Resistance Network & The Houston Free Thinkers.
https://www.thelastamericanvagabond.com/category/derrick-broze/