OUT OF MIND » PERCEPTUAL AWARENESS ~ WELCOME TO WOOVILLE » POWER TOOLS » Sacred Geometry: DNA is the Flower of Life

Sacred Geometry: DNA is the Flower of Life 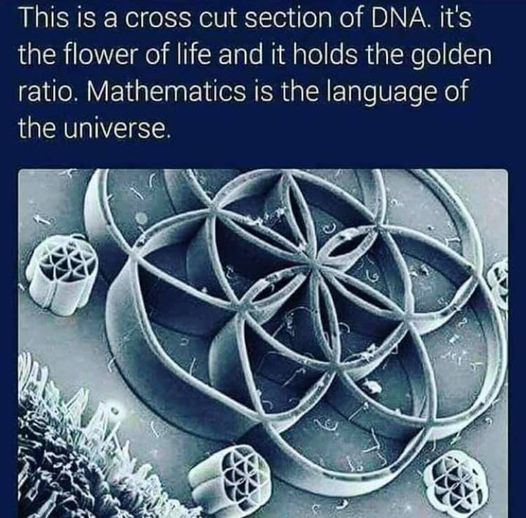 Sacred geometry is visible even in our DNA.
It’s amazing how sacred geometry plays into the observation of nature, music/sound, and color. All these concepts connect in magick. For the true magician, these synchronicities are evidence of intelligent design and hence, Prime Creator (or God). Recognizing such an interconnectedness of everything speaks to the goal of personal spiritual growth and self-sacrifice to then help others grow.
For the LHP practitioner, however, there is no such realization. They only recognize themselves as God and are willing to sacrifice others for their own personal gain and power, and to escape consequences via the Faustian Pact. They mimic creation as “the image of an image,” rather than creation in the image of God. Such is the goal of the NWO which promotes atheist, materialistic science and a mechanistic universe. If we’re going by the terms white magick (or grey magick) and black magick, white reflects all colors, while black absorbs them, and grey has both (meaning that the individual mostly practices white magick but will practice baneful magick as self-defense).
Each color of light varies by vibration. So, for example, blue light has a higher vibrational frequency and shorter wavelength than red light. Sound, too, has a vibrational correspondence with color. Such a realization makes sense when vibrating certain sounds, words or mantras while meditating. IAO is a major one among ceremonial magicians, as vibrating the threefold IAO runs through one’s middle pillar chakras and stimulates major endrocrine glands along with the parasympathetic system.

Rife painstakingly identified the individual spectroscopic signature of each microbe, using a slit spectroscope attachment. Then, he slowly rotated block quartz prisms to focus light of a single wavelength upon the microorganism he was examining.
This wavelength was selected because it resonated with the spectroscopic signature frequency of the microbe based on the now-established fact that every molecule oscillates at its own distinct frequency.
The atoms that come together to form a molecule are held together in that molecular configuration with a covalent energy bond which both emits and absorbs its own specific electromagnetic frequency.
No two species of molecule have the same electromagnetic oscillations or energetic signature. Resonance amplifies light in the same way two ocean waves intensify each other when they merge together.
The result of using a resonant wavelength is that micro-organisms which are invisible in white light suddenly become visible in a brilliant flash of light when they are exposed to the color frequency that resonates with their own distinct spectroscopic signature.

What about DNA and the Golden Ratio?
DNA stores light. Both visible and invisible light are part of the electromagnetic spectrum. Electromagnetic energy is what magicians harness for magick and skills such as mesmerism (via the gaze — “the eyes are the window to the soul”) or simply attracting or repelling people or things on a conscious, wilfull level.
In fact, the human body has a field of light surrounding it, known as the aura. Within the body is a crystal matrix through which light travels. There are 7 subtle bodies which vary by density and correspond to planetary spheres (sephiroth) of the Qabalah. The ultimate goal of the magician in The Great Work is to crystallize that light in order to achieve integrity or congealing of the soul. This integrity is in part achieved by consistency in word and deed, rather than compartmentalization and fragementation of the personality (something can be extreme and a result of MK-Ultra programming, such as what Michael Aquino of the Temple of Set engaged in as a handler, along with human sacrifice and pedophilia). A skilled magician can maintain consciousness in 2, 3 or more subtle bodies at once. On the other hand, LHP practitioners, rather than doing the self-work towards greater consciousness and helping humanity, make the gains at the expense of others. Hence, the SRA harvesting of adrenochrome (adrenalized blood which contains glandular secretions), cannibalism and (astral as well as literal) vampirism.


The Flower of Life follows the Golden Ratio (Phi,  Φ = 1.618033988749895). Pi (3.14159, π) is the Golden Number. While pi is a transcendental number, phi is the solution to a quadratic equation. Both the Golden Ratio and Pi relate to Fibonacci numbers, and we can observe all three in nature. Also, we can get a wide spectrum of colors (related to sound and light vibrationally) from golden ratio relationships in the distance between two colors.
Now here is where it gets even more interesting. Quadratic equations create curves while completing the square to find the solution. The DNA double helix implies the number 2, while each of the strands can be represented by the curves from quadratic equations. To create a simple model of a piece of DNA, you can idealize the strands as closed curves in space and apply the formula linking number = twist + writhe. The linking number is the number of times the strands cross, divided by 2. Twist is the number of times each curve goes around the central axis, while writhe is the number of loops around the central axis.
Spiritually, I would relate humans as creations in the image of God (if God is represented by 0) to the original human DNA and the number 2, as in, the square resulting in the 4 worlds of manifestation on the Tree of Life/Qabalah, or one person helping another. I would relate the NWO fuckery of human DNA (vaccines, chemicals in food, GMOs, cloning, etc.) to the “image of an image” Luciferian (and Luciferase) to the number 4 (2 x 2) reflecting the Nightside (Qliphoth) of the Tree of Life, or the square base of the pyramid, which to LHP practitioners is the “pyramid scheme” hierarchy where one steps on others to get to the top and be The One.

OUT OF MIND » PERCEPTUAL AWARENESS ~ WELCOME TO WOOVILLE » POWER TOOLS » Sacred Geometry: DNA is the Flower of Life