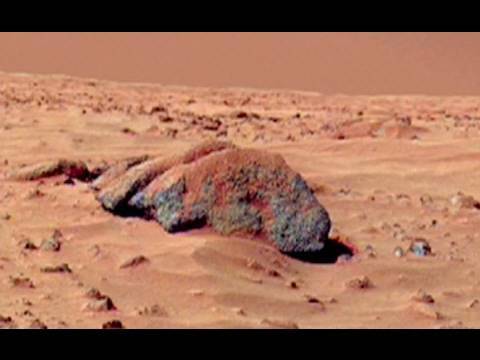 Life on the red planet: Ex-NASA scientist claims the Viking missions found proof of alien life on Mars back in the 70s

Scientists may have actually discovered evidence of extraterrestrial life on Mars back in the 1970s.
This is according to former National Aeronautics and Space Administration (NASA) scientist Gilbert Levin, who, in a column for Scientific American, claimed that the Viking missions — specifically its Labeled Release (LR) life detection experiment — found evidence of life on the Red Planet.
1970s Experiment came up with evidence of life
The Labeled Release (LR) life detection experiment involved the collection of Martian soil, to which the experimenters added a nutrient solution. This solution, as noted in documents from that period, contained nutrients tagged with radioactive carbon-14 which would then be metabolized into radioactive carbon dioxide. This metabolization, according to experts, would only be detected if life were present.
Levin, who was part of the LR experiment, said their team registered four positive results.
“On July 30, 1976, the LR returned its initial results from Mars. Amazingly, they were positive. As the experiment progressed, a total of four positive results, supported by five varied controls, streamed down from the twin Viking spacecraft landed some 4,000 miles apart … The data curves signaled the detection of microbial respiration on the Red Planet. The curves from Mars were similar to those produced by LR tests of soils on Earth. It seemed we had answered that ultimate question,” Levin said in his column.
Unfortunately, Levin said, NASA eventually cut the experiment after the Viking Molecular Analysis Experiment failed to detect organic matter, which at that time was considered to be the essence of life. NASA merely noted that LR had found a substance “mimicking life,” but not actual life.
This, Levin said, has led to NASA canceling any life-detection missions.
“Inexplicably, over the 43 years since Viking, none of NASA’s subsequent Mars landers has carried a life-detection instrument to follow up on these exciting results,” Levin said, adding that the agency instead chose to launch missions meant to check for the presence of habitable spots on the Red Planet.
All this effort being spent to check for habitable locations, Levin said, could have been better used to review the Red Planet’s capacity to support life — especially since there is enough evidence of microscopic life on Mars.
“Such an objective jury might conclude, as I did, that the Viking LR did find life. In any event, the study would likely produce important guidance for NASA’s pursuit of its holy grail,” Levin said, reiterating his point that their mission, all things considered, was a success.
According to Levin, the Viking LR was meant to detect and monitor ongoing metabolism, which is considered to be a very simple and fail-proof indicator of living microorganisms.
“Several thousand runs were made, both before and after Viking, with terrestrial soils and microbial cultures, both in the laboratory and in extreme natural environments. No false positive or false negative result was ever obtained. This strongly supports the reliability of the LR Mars data, even though their interpretation is debated,” Levin stressed in his column.
Later missions have also brought back evidence of life on Mars
In addition to the prior data obtained by the Viking LR experiments, subsequent missions have brought back evidence of Martian life, Levin stated.
These, according to Levin, include the following:

Aside from that, Levin said, there is also evidence via laboratory studies that some microorganisms from Earth can actually survive and grow on Martian soil.
Levin, as he pointed out in his column, is holding out for the chance that NASA will reconsider its decision to not include a life-detection test in its upcoming lander missions.
“In keeping with well-established scientific protocol, I believe an effort should be made to put life detection experiments on the next Mars mission possible,” Lanvin said, adding that he has put together an amended version of the LR experiment in a bid to detect — and confirm — the existence of life on the Red Planet.

» Ex-NASA Scientist “Convinced” Alien Life Was Found on Mars Over 40 Years Ago
» NASA scientist: 'We already found life on Mars'
» NASA Scientist Claims to Have Found a Massive Alien Spacecraft Hiding in Saturn’s Rings
» 2014! FORMER NASA SCIENTIST CONFIRMS ALIEN LIFE ON MARS - EVIDENCE DESTROYED!
» ALIEN MESSAGE FOUND ON MARS ~ NASA CLAIMS THEY HAVE NO IDEA HOW IT WAS CREATED!