OUT OF MIND » THE INSANITY OF REALITY » GOVERNMENTS & THE NEW WORLD ORDER » Update: 18 States Sue Georgia, Michigan, Pennsylvania and Wisconsin for Election Fraud "The allegations in the Bill of Complaint raise important constitutional issues under the Electors Clause of Article II... These are questions of great public importance that warrant this Court’s attention." *17 STATES* are now backing TEXAS' SCOTUS lawsuit. 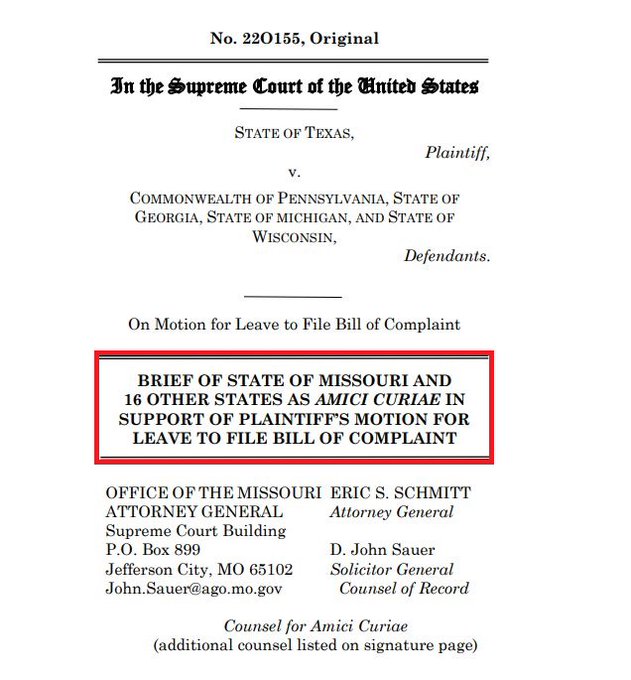 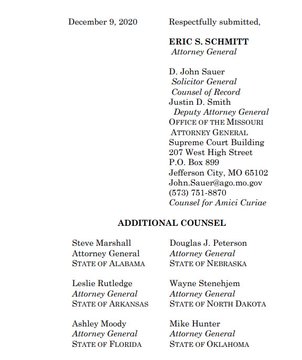 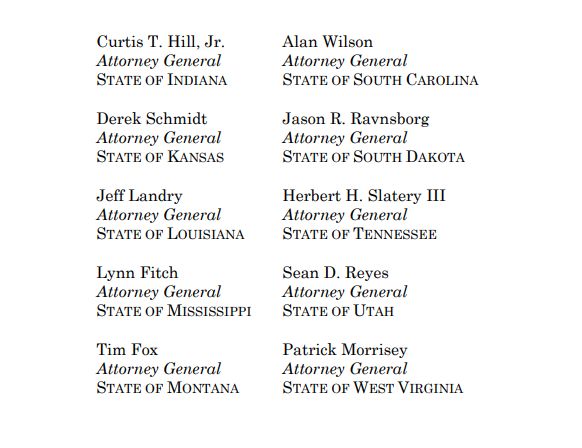 2.2K people are Tweeting about this


The Lone Star State is arguing that all of these states violated the Electors Clause of the Constitution by illegally changing their voting rules and procedures through courts or executive actions rather than lawfully through state legislatures.
These states also violated the Equal Protection Clause of the Constitution by implementing different voting rules and procedures in different areas within their own state borders, according to the lawsuit.
Last but not least, the lawsuit alleges that the aforementioned constitutional violations led to “voting irregularities” that resulted in fraudulent election results, which must be overturned in the interest of preserving free and fair elections in the United States.
“Certain officials in the Defendant States presented the pandemic as the justification for ignoring state laws regarding absentee and mail-in voting,” the lawsuit reads.
“The Defendant States flooded their citizenry with tens of millions of ballot applications and ballots in derogation of statutory controls as to how they are lawfully received, evaluated, and counted.”
“Whether well intentioned or not, these unconstitutional acts had the same uniform effect – they made the 2020 election less secure in the Defendant States,” it adds.
“Those changes are inconsistent with relevant state laws and were made by non-legislative entities, without any consent by the state legislatures. The acts of these officials thus directly violated the Constitution.”
Attorney Sidney Powell is also working on her own lawsuits to challenge election fraud.

The law is what ultimately decides elections, not CNN or Fox News

Because the lawsuit involves a dispute between two or more states, it will advance straight to the Supreme Court, bypassing all of the lower courts.
This is in accordance with Article III of the Constitution, which designates the Supreme Court as the court of first impression on subjects where it has original jurisdiction.
Seeing as how many of the lower courts are ruled by far-left activist judges who continue to throw out meritorious election fraud cases for political reasons, this is great news and could be the lynchpin that finally leads to the positive outcome for which we have all been waiting.
The case is a defining one that will ultimately determine whether Joe Biden really won the election, or whether President Donald Trump will serve for another four years.
Based on the mountain of evidence that continues to accumulate, it is probably safe to say that the mainstream media and the Democrats who believe everything they say are going to have some serious egg on their face in the coming weeks.
“These non-legislative changes to the Defendant States’ election laws facilitated the casting and counting of ballots in violation of state law, which, in turn, violated the Electors Clause of Article II, Section 1, Clause 2 of the U.S. Constitution,” the lawsuit contends.
“By these unlawful acts, the Defendant States have not only tainted the integrity of their own citizens’ vote, but their actions have also debased the votes of citizens in Plaintiff State and other States that remained loyal to the Constitution.”
With the suit, Texas is petitioning the Supreme Court to require defendant states to allow their legislatures to appoint electors to the Electoral College. This will ensure that a free and fair election outcome is achieved.
“Brilliant!” wrote one Breitbart News commenter. “They just bypassed a slew of activist Democrat judges.”
“I like this lawsuit because it starts in SCOTUS and addresses the corruption across all four states at once,” wrote another.

OUT OF MIND » THE INSANITY OF REALITY » GOVERNMENTS & THE NEW WORLD ORDER » Update: 18 States Sue Georgia, Michigan, Pennsylvania and Wisconsin for Election Fraud