King rose from radio fame to an iconic TV career where the famous and powerful came to answer his short, concise questions. 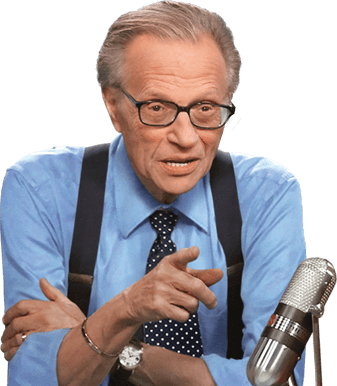 Larry King, the radio broadcaster who took cable TV news by storm with his iconic suspenders, gravely voice and big-name interviews, died Saturday. He was 87.
His death was announced by his TV production company on his Twitter account, less than a month after it was announced he was suffering from COVID-19.
"With profound sadness, Ora Media announces the death of our co-founder, host, and friend Larry King, who passed away this morning at age 87 at Cedars-Sinai Medical Center in Los Angeles," the tweet sad.
"For 63 years an across the platforms of radio, television and digital media, Larry's many thousands of interview, awards, and global acclaim stand as a testament to his unique and lasting talent as a broadcaster. Additionally, while it was his name appearing in the shows' titles, Larry always viewed his interview subjects as the true stars of his programs, and himself as merely an unbiased conduit between the guest and audience," the statement added.

For more than six decades, King commanded the art of the interview on radio and TV, asking short concise questions and allowing his famous and powerful subjects the time to answer. For a quarter century, he commanded the chair in prime time on CNN with his hit show Larry King Live, drawing Hollywood royalty, presidents and world leaders to his interview chair on a nightly basis.
His company hailed his polite, direct interview style in an era today where bombastic confrontation is often the norm for TV interviews.
"Whether he was interviewing a U.S. president, foreign leader, celebrity, scandal-ridden personage, or an everyman, Larry liked to ask short, direct, and uncomplicated questions. He believed concise questions usually provided the best answers, and he was not wrong in that belief," the statement said.