Latest topics
»  Bathed in Pesticides: the Narrative of Deception

OUT OF MIND » POISON PLANET » VACCINE TRUTHS: MEDICAL INDUSTRY LIES » Injured by a Vaccine? Here’s How to Report It

Injured by a Vaccine? Here’s How to Report It

Injured by a Vaccine? Here’s How to Report It


CHD is calling on anyone who has suffered a vaccine side effect to do three things: file a report on the U.S. government’s VAERS website, report the injury on VaxxTracker.com and also here, on the CHD website.
By
Children's Health Defense Team 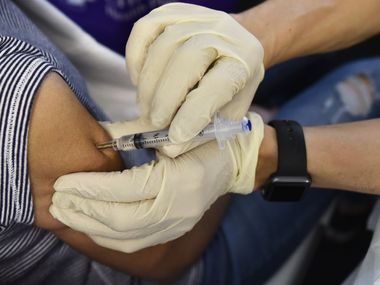 Children’s Health Defense (CHD) has joined other organizations around the globe in an effort to encourage, and make it easy, for vaccine recipients to report injuries and adverse reactions to any vaccines, including the new COVID vaccines produced by Pfizer, Moderna, AstraZeneca and others.
CHD asks that anyone who suspects they have suffered any kind of adverse side effect, from any vaccine, do all three of the following:

VaxxTracker users can click on the option to report anonymously.
“With vaccines so much in the spotlight now, we have a tremendous opportunity to draw attention to the issues of vaccine safety and vaccine choice,” said CHD President Lyn Redwood, RN, MSN. “But we need the public’s help. That’s why CHD has joined in this effort to ensure that vaccine injuries are reported, so they can be analyzed and appropriate actions can be taken.”
VaxxTracker gives people a safe place to report symptoms they believe resulted from a vaccine. Users can also view charts and graphs illustrating the types of symptoms being reported, the number of symptoms associated with specific vaccines, and other trends.


CHD and other organizations will closely monitor adverse event reports collected by VaxxTracker to follow trends and report signals to the responsible federal agencies, the vaccine manufacturers and the public, Redwood said.
“The pandemic has resulted in the largest-ever massive global effort to convince, and in some cases coerce and bully people into not only being vaccinated, but to accept without question unlicensed, experimental vaccines, rushed to market and approved for emergency use only,” Redwood said.
“Instead of focusing on prevention and effective therapeutics, mainstream media, aided by slick PR campaigns, continues to report that all COVID vaccines are safe and effective, and that they are the only way to end the pandemic.”
Still, news reports of injuries and deaths are surfacing, in the U.S. and other countries. As The Defender reported last week, as of Jan. 7, 66 deaths had been reported to VAERS as possibly being related to COVID vaccines.
By law, Redwood said, healthcare workers are required to report any adverse events they suspect may be related to a vaccine. “We know that historically, this hasn’t always happened,” she said. Sometimes, the side effect didn’t occur immediately, and neither the patient nor the doctor connected the dots.
With COVID, Redwood said, healthcare workers are even less likely to report side effects, “simply because they are overwhelmed with treating patients who have the virus.”
A 2010 federal study commissioned by HHS and performed by Harvard consultants on behalf of the Agency for Healthcare Research and Quality found that fewer than 1% of vaccine adverse events are ever reported to VAERS.
In his Dec. 18 letter to Dr. David Kessler, newly named co-chair of then-President Elect Biden’s COVID-19 Advisory Committee, Robert F. Kennedy, Jr., CHD chairman and chief legal counsel, said regulatory officials can’t count on post-marketing surveillance to reveal COVID-19 vaccine injuries because VAERS “is broken.”
Kennedy wrote:
“COVID vaccine advocates argue that post-licensing surveillance will remedy the deficiencies in the pre-licensing clinical trial data collection system. As you know, this is not true. The Vaccine Adverse Event Reporting System (VAERS), a voluntary reporting system co-administered by FDA and CDC since 1990, is a well-documented public failure.”
As The Defender reported earlier this week, a new peer-reviewed study focused primarily on the measles-mumps-rubella-varicella (MMRV) vaccine, called vaccine injury reporting systems worldwide “utterly inadequate.”
“VAERS clearly states that it is a ‘passive reporting system,’” Redwood said. “That means HHS isn’t going out of its way to track vaccine injuries — the system is totally dependent on people who are injured to do the reporting. It’s critical, as employers and health officials float the idea of mandating COVID vaccines, that all injuries get reported.”
Visit the VaxxTracker about us page to learn more about the system and how you can use it.

OUT OF MIND » POISON PLANET » VACCINE TRUTHS: MEDICAL INDUSTRY LIES » Injured by a Vaccine? Here’s How to Report It