Cryptid Experts Weigh In on Bigfoot Hunting Season in Oklahoma 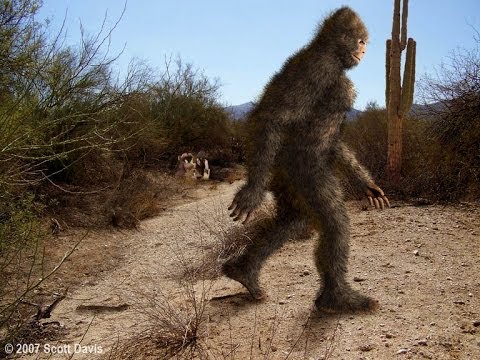 “I was so relieved to read that state Rep. Justin Humphrey clarified the intent of his legislation by saying, “I want to be really clear that we are not going to kill Bigfoot. We are going to trap a live Bigfoot.” However, he didn’t say what they are going to do with a live Bigfoot. I assume that Bigfoot will then be brought to the state Capitol. My question: Will Bigfoot have to run for the position of state representative or will he automatically become a state representative?”

You know your proposed legislative bill is doing what you intended it to do when you start getting positive comments on the editorial pages – even if they’re tinged with a little sarcasm. For Oklahoma state Rep. Justin Humphrey to read that Letter to the Editor of Tulsa World, it was probably a welcome respite from the negative publicity he’s been receiving after submitting House Bill 1648 proposing the establishment of an official Bigfoot hunting season in Oklahoma, complete with licenses, fees, limits and regulations. After being grilled by the national media and roasted by the late night talk show hosts, Humphrey backpedaled and said he meant ‘capture Bigfoot alive’, not hunting it dead. That didn’t satisfy a lot of people, especially Bigfoot experts.

“Bigfoot should be protected, not shot. These creatures should be preserved in their natural environment. Any kind of new species — like a Bigfoot — even needs the protection of some kind of federal law.”

You know your proposed legislative bill is going to cause a lot more headaches when the Bigfoot experts you should have consulted with are instead lambasting you in the New York Post. Gary Robusto has two alleged New York state Bigfoot sightings to his credit – one in 2012 near Whitehall on the Vermont border, and one recently in Albany County where he lives. Whitehall is one of the top Bigfoot hotspots in the country. The city named Bigfoot its official mascot in 2018 and passed a law banning the “willful harming” of Bigfoot and designated the city as a protective habitat – a ‘Sasquatch sanctuary city’ you might say.


“A hunting season is a bad idea all-round — certainly for Bigfoot but also the hunters. You could have hunters hurting themselves, shooting a little haphazardly.”

Paul Bartholomew, author and proponent of the Whitehall law, agrees with what a lot of people in Oklahoma told Humphrey – this Bigfoot hunting season is more dangerous to hunters than to Bigfoot. Bartholomew has never seen one but he’s a lifelong Bigfoot researcher, asking skeptics, “But why are people seeing these creatures?” One such skeptic is Buffalo NY resident Joe Nickell, a senior research fellow at the Committee for Skeptical Inquiry, who has debated Bartholomew on the subject numerous times, but has a far lower opinion of people hunting Bigfoot, whether it exists or not.


“It’s a whackadoodle idea. What he’s doing is an absolute invitation to needlessly kill wildlife, especially bears because they resemble Bigfoot. I don’t know why we would want people unleashing guns out in the forest to hunt Bigfoot…they may shoot Littlefoot — themselves.”

Not Bigfoot
Humphrey has stuck to his guns – pun intended – albeit revising them to be weapons of persuasion rather than extermination … used to convince Bigfoot to enter the back seat peacefully for a trip to the state capitol while businesses rake in the tourist dollars and hunting fees. Has he offered Bigfoot a percentage?
This won’t be over until House Bill 1648 comes up for a vote in Oklahoma – and that probably won’t end it either. Like hunting, believing in Bigfoot is an emotional issue that people on both sides agree is worth fighting for … even if they have far better things to fight for and get emotional about these days. However, if you’re one who believes it’s important to hear both sides of an argument, then it’s time to hear from more Bigfoot experts, especially in Oklahoma.
Otherwise, you’re just a whackadoodle Littlefoot.

» NIBIRU News ~ 8/02/2015 ~ With the arrival of Planet X comes alien hunting season as well and MORE
» Calling BS on the alleged drop in flu cases from 400,000 last season to 165 this season
» Cave painting depicts world's oldest cryptid
» Bigfoot DNA, Final Proof
» Here is Something We Have Not Seen for Awhile - Fresh Bigfoot mystery