OUT OF MIND » THE INSANITY OF REALITY » GOVERNMENTS & THE NEW WORLD ORDER » Biden, Psaki, And Harris Under Fire For Past Tweets Criticizing Trump’s Military Actions Following New Syria Airstrikes 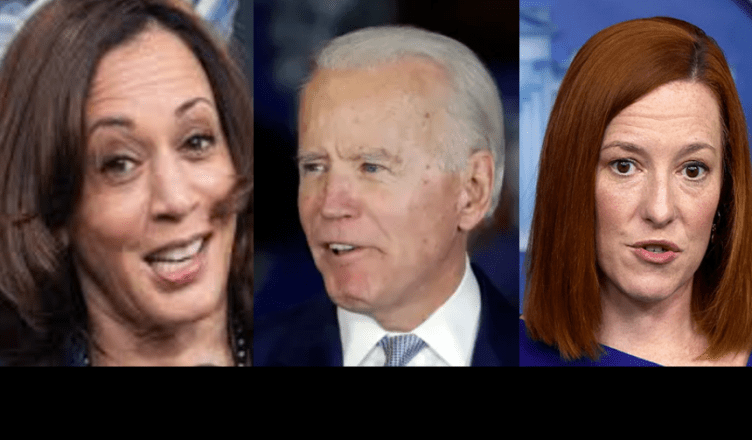 Source: The Scoop
Fraudulent President Joe Biden, Vice President Kamala Harris and press secretary Jen Psaki are under fire after their past tweets lashing at former president Donald Trump’s military actions resurfaced — as the Democratic president approved airstrikes in Syria killing at least 22 people.
Biden in 2019 called Trump “erratic” and “impulsive” when he threatened to bomb Iran amid an escalation of tensions back then.
Biden called Trump “erratic” and “impulsive” over strike threats
It was reported that the former Republican president had considered air strikes on Iran following the downing of a US drone by Tehran over the Strait of Hormuz but didn’t push through with the plan despite being “cocked and loaded” to bomb citing fears of possible civilian casualties.

“Trump’s erratic, impulsive actions are the last thing we need as Commander-in-Chief. No president should order a military strike without fully understanding the consequences,” the now-president Biden tweeted on June 22, 2019.
“We don’t need another war in the Middle East, but Trump’s actions toward Iran only make that more likely,” he added.
In October 2019, Biden, who was then a Democratic presidential candidate, went on to blast Trump’s move to withdraw troops from Northern Syria — describing the former president’s action, again as “erratic” and “impulsive.”

“I’ll be discussing Donald Trump’s recent actions in Syria and how his erratic, impulsive decisions endanger our troops and make us all less safe,” Biden wrote on Twitter on October 17, 2019.
While campaigning in Iowa, Biden also said Trump’s military actions “have had devastating clarity of just how dangerous this president is.”
Psaki questioned Trump’s “legal authority” for strikes
White House press secretary also questioned the former Trump administration’s “legal authority” for airstrikes back in 2017.

“What is the legal authority for strikes? Assad is a brutal dictator. But Syria is a sovereign country,” Psaki said in a past tweet that appeared to come back biting her now.
Meanwhile, Vice President Kamala Harris also tweeted back in 2018: “I strongly support our men and women in uniform and believe we must hold Assad accountable for his unconscionable use of chemical weapons. But I am deeply concerned about the legal rationale of last night’s strikes.”

“The president needs to lay out a comprehensive strategy in Syria in consultation with Congress — and he needs to do it now.”

“Hey girl! guessing you circled back to this one, huh?” another user wrote.
“Great tweet. I look forward to you condemning @JoeBiden’s illegal strikes in your press conference tomorrow,” another one commented pertaining to Psaki’s old tweet.
“This didn’t age well,” said another, quoting Psaki’s post.

OUT OF MIND » THE INSANITY OF REALITY » GOVERNMENTS & THE NEW WORLD ORDER » Biden, Psaki, And Harris Under Fire For Past Tweets Criticizing Trump’s Military Actions Following New Syria Airstrikes