OUT OF MIND » CHANGING ENVIRONMENT & NATURE » NEW TECH FOR A HEALTHY PLANET » Upcycling: Saving the Planet By Design

Upcycling: Saving the Planet By Design


(Northpoint Press), American architect William McDonough and German chemist Dr Michael Braungart offer a new improved version of the cradle to cradle (C2C) vision they first introduced with their 2002 book Cradle to Cradle: Remaking the Way We Make Things. C2C design is an approach to architecture and manufacturing that seeks to lessen environmental damage and the impact of resource scarcity by revolutionizing the way we design products, factories, buildings and cities – as opposed to trying to undo or minimize the negative effects of conventional production. There are no villains in C2C design. McDonough and Braungart are highly critical of the current tendency to demonize carbon, given its role as an essential building block of life. There’s simply too much of it accumulating in the atmosphere when it should be returning to the soil for food production. They also object to labeling incandescent light bulbs, air travel, long showers and disposable diapers as “bad for the environment.” Instead of shaming and penalizing people who use these products for “wasting energy,” we should be trying to find more efficient ways to produce them. 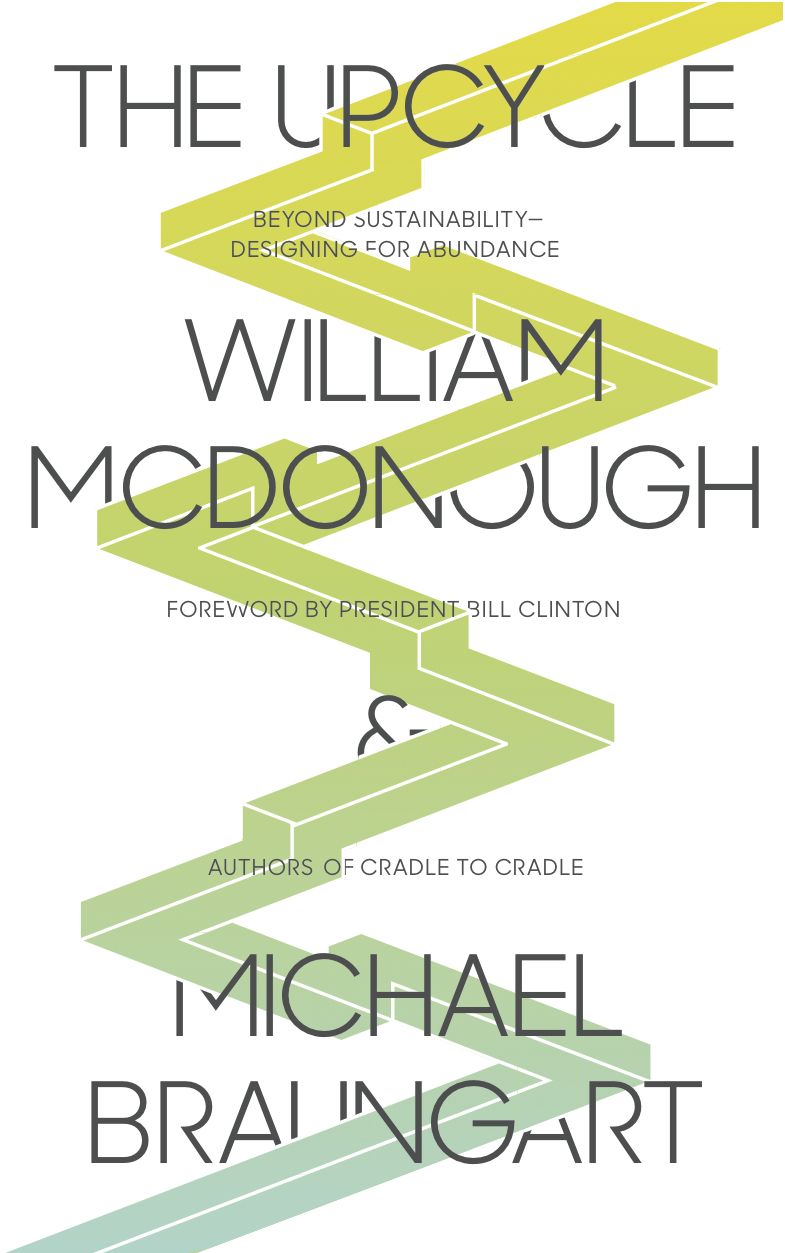 Imitating Nature’s Design Principles
A fundamental precept of C2C design is its emphasis on biomimicry, i.e. copying the genius of nature’s design principles. One of the major drawbacks of conventional industry is a built-in inefficiency in which valuable resources are lost to the landfill, incineration or runoff. In C2C design, as in nature, there is no waste. Instead products, industries and processes are designed in such a way that waste from one provides the raw materials for others. McDonough and Braungart argue that the initial design of any product, building or factory should include detailed planning for the new products that will be made from its basic elements when it wears out or is torn down. For example, a C2C computer would be designed to be returned to the manufacturer and easily disassembled into safe, environmentally friendly components that can easily be put to other uses.
The Cradle to Cradle Products Innovation Institute

With their new book, the authors elaborate on their earlier work by introducing the concept of “upcycling.” This they define as optimizing the materials, ingredients and process pathways in such a way that waste is converted to raw materials for nature or some other industry. By ensuring that scarce natural resources, such as aluminium, copper, water and wood, are continuously reused, there is less pressure to destroy more and more of the environment to replace them. After consulting with hundreds of businesses and cities on adopting C2C design principles, in 2010 they started McDonough-Braungart Design Chemistry (MBDC) and the Cradle to Cradle Products Innovation Institute. The latter issues C2C certification for companies and products based on five quality categories:
1. Use of materials that are safe and healthy for humans and the environment
2. Incorporation of design principles that allow all products to be reused by nature or industry.
3. Use of renewable, non-polluting energy in the manufacture and assembly process.
4. Use of production processes that protect and enrich the water supply.
5. Treatment of all people involved in a socially responsible way.
The Upcycle presents numerous real life cases demonstrating the enormous economic advantages C2C technology can have for business. Lower energy and water processing costs can save tens of millions of dollars in both upfront capital costs and long term operational costs.
The Argument against Biofuels, Nuclear Energy, and Dam-Based Hydropower
A large section of The Upcycle analyzes the cost and desirability of current renewable energy options. Biofuels, nuclear energy and dam-based hydropower are rejected as being incompatible with C2C technology. The authors reveal the present biofuel industry is responsible for massive rainforest destruction in Indonesia, without offering a significant reduction in CO2 emissions (because they contain the same complex carbon chains, biofuels produce as much CO2 as fossil fuels). Nuclear technology, in turn, creates a massive amount of permanent waste that can’t be diverted to other safe uses. Finally large dams, which cause the same kind of environmental damage and habitat destructions as strip mining and nuclear energy, has virtually decimated the wild salmon population in the Pacific Northwest. The authors give much higher marks to small scale high head hydro generation in which water flowing downstream turns a ferris wheel-type generator.
They also feel solar, wind (especially offshore wind generation, which is less aesthetically controversial), geothermal and biogas from manure and landfill waste have great promise. They note that as of 2 June 2012 wind-generated electricity is two cents per kilowatt hour cheaper than coal.
A Small Caveat
The Upcycle promotes two viewpoints I take strong exception with. The first concerns overpopulation. The book’s argument that each new person is a “potential source of raw materials” fails to address concrete space limitations and the epidemic of species extinctions linked to human over population. Likewise the authors’ argument that business is more potentially helpful than government in the transition to a C2C society seems incredibly naïve. They claim that business is less subject to corruption and more “adaptable,” owing to pressure to be profitable or die. As society is currently structured, there is virtually no check on corporate corruption. Moreover businesses have no disincentive against employing maladaptive strategies when they know the government will bail them out.

Upcycling: Saving the Planet By Design A fundamental precept of C2C design is its emphasis on biomimicry, i.e. copying the genius of nature’s design principles.

OUT OF MIND » CHANGING ENVIRONMENT & NATURE » NEW TECH FOR A HEALTHY PLANET » Upcycling: Saving the Planet By Design