One doesn’t need to be rich or powerful to be a good people … one only needs to care about others and be willing to make a few sacrifices to help people.  Today, I bring you a bunch of good people, and a good critter too! 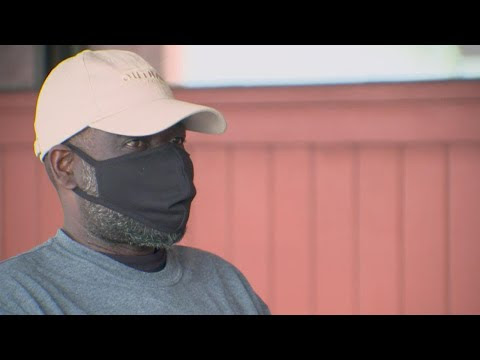 A journey of a thousand miles …
It’s funny how sometimes one simple act of kindness can have a domino effect and completely change a person’s life.  Just a few short months ago, Kenneth Smith of Fort Worth, Texas, was homeless and didn’t even have money to buy a meal.  He was resting, with nowhere to go, in a chair outside a Fort Worth Outback Steakhouse hungry and half asleep.  Today, he has a job, a place to live, and plenty to eat, and it all started with a woman who, seeing him slouched in the chair as she was leaving the restaurant, asked him if he was alright.
“She asked me was I alright, so I told her, ‘No, I’m not okay at this time.”
She gave him a $100 gift card to buy dinner.  During the course of his meal he began talking to the restaurant’s managing partner, Laura Hodges, who said to Mr. Smith …
“Hey, I don’t ever want you to want for food or go hungry. I want you to always have somewhere that you can get a warm meal. So, here’s my business card. Bring it anytime.”
For a few months, Mr. Smith dropped in for a meal from time to time until he finally decided to ask Ms. Hodges for a job, and just last month he was hired to bus tables.  Since Smith had no home, Ms. Hodges posted on the Fort Worth Foodies Facebook page asking if anyone knew of a motel with affordable rates.
Instead, generous commenters have now paid for six weeks at a nearby Extended Stay hotel and have donated more than $2,200 along with a bike, clothing, kitchen items and groceries.  Says an incredibly grateful Kenneth Smith …
“I think it’s so much of a good blessing, and it’s wonderful just to have people these days that’ll do things for you.  This is a whole new beginning that God has blessed me with, so I’m trying to get on this right good track that he wants me to stay on.”
Smith is saving up his money for a car, then a home and one day hopes to have his own food service business.  Sometimes all it takes is a leg up, a helping hand, or a $100 gift card.  The woman who started the ball rolling is unknown.  Ms. Hodges says …
“We wish we could find her and know who she was because she blessed both of our lives. This has been a great thing for both of us.  I’m blown away by the generosity of people. It’s absolutely amazing.”
As Chinese philosopher Lao-Tzu once said, a journey of a thousand miles starts begins with a single step.

Forgiveness
Carl Wallace is the owner of Diablo’s Southwest Grill in Augusta, Georgia. Just over two weeks ago, someone smashed the restaurant’s front door with a brick in an attempt to steal cash from the register — but there wasn’t anything in the drawer.
“You know my initial response was, you know, anger, frustration. I realized that we’re gonna have to kind of put up a Facebook post about our door looking really, really bad because here we are going to put up two sheets of plywood over the front door to just get through the day.”
But a funny thing happened as he was writing the post to explain the restaurant’s door …
“It really kind of occurred to me … Easter weekend and to just extend an olive branch. You know, extend the layer of forgiveness and kindness and give the … would-be robber some redemption and a different path.”
Wow.  How many of us would have been so forgiving?  The Facebook post reads …
“Our burritos are such a smash hit we’ve got people breaking in at 4am for their fix. So if ya see our door looking hurricane fabulous at Wheeler Rd this is why.
To the would be robber who is clearly struggling with life decisions or having money issues… please swing by for a job application. There are better opportunities out there than this path you’ve chosen. My personal cell is 706-513-3557.
No police, no questions. Let’s sit down and talk about how we could help you and fix the road you’re on.
Sincerely Carl”
So far, nobody has come forth, but nonetheless, Carl Wallace did what most of us would not likely have done in similar circumstances … he extended the olive branch, and in my book, he is a good people.

A closet filled with kindness
Anderson “Andi” Musser is a fifth grade student at Shreve Elementary School in Ohio.  Recently, a friend confided in her that she wished she had some girls’ clothing to wear to school.
“I went to my closet and got the clothes and shoes that I had outgrown. I gave them to her at school the next day. And she was really happy.”
After gifting her friend clothes, Andi couldn’t stop thinking about how great it felt to help someone in need, and a seed of an idea began to sprout.  The next day, Andi approached her principal with her idea to create a Kindness Closet, a place students can visit during the school day to “shop” for a new or gently worn garments.
Says Principal Adam Stein …
“She came to me, and I said, ‘Yup, let’s do it.'”
Andi asked local stores for donations. Dick’s Sporting Goods, Everything Rubbermaid, Goodwill, Kohl’s, and Mission: Thrift all pitched in.

“It’s great for Andi to see her vision come true. It’s part of our culture here at Shreve and Triway. … Proud is an understatement, for sure. It’s what every principal and parent would want for their kid to do – to put others first.”
I’m amazed … a young girl has more humanity and compassion than so many adults we see today.  I think this young lady is going to make a difference in people’s lives in this world.

Critters is good people too
It was September 2000 when Kevin Hines, at the age of 19, decided to end his life.
“I jumped off of the Golden Gate Bridge. I was nineteen years old and after leaving the bridge, my first thought was that I had made a terrible mistake.  Upon my resurfacing, I bobbed up and down in the frigid waters surrounding me. Then, something brushed by my legs, I feared it was a shark come to devour me whole. I tried to punch it thinking it might bite me. However, this marine animal, whatever it was, just circled beneath me, bumping me up.”

The sea creature helped keep Hines afloat until he was rescued by the Coast Guard.
Soon after his recovery, Hines became a suicide prevention/motivational speaker. He never knew what the animal was until he was featured on ABC’s “Primetime with John Quinones” to discuss suicide prevention.
Hines said he was flooded with emails after the show and one of them was from a man named Morgan.
He wrote:
“Kevin, I am so glad you are alive as I was standing less than two feet away from you when you jumped…. And by the way it was not a shark (like you mentioned in the TV show) it was a sea lion and I have pictures.”

Hines received a picture from birds-eye view of his near lifeless body laying atop a circling sea lion.  Now Hines tells his story to at-risk groups around the nation, urging people to get treatment for mental illness and helping them realize that suicide is not the answer.  That sea lion may have saved many more than just Kevin’s life on that day more than 20 years ago … we will never know.