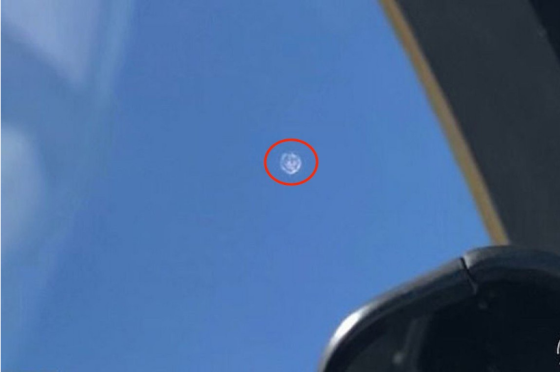 The picture you see above comes from a series of photographs that have been confirmed authentic by the Pentagon.

Unidentified Flying Objects (UFOs), now known as Unidentified Aerial Phenomenon (UAPs) within the mainstream, is arguably one of the most popular subjects on the minds of people all over the globe. “Mainstream” coverage of the phenomenon lending a large amount of legitimacy to the topic over the past few years via outlets like the New York Times and CNN, for example is now commonplace. U.S. intelligence agencies are also expected to release even more information about what they know about the phenomenon within the next couple of months, but based on my experience, humanity may never get close to the entire sphere of what governments and black budget programs have uncovered about the phenomenon over the past several decades that they’ve been studying it.
-->Watch a free sneak peek of our new course:  Our latest course focuses on how to improve your critical thinking and become more aware of bias. Click here to check it out!
I do not believe this topic is for governments to disclose, but rather the citizenry to investigate for themselves. If we continue to rely on governments as well as mainstream media for truth, we most likely will always be deceived in some way shape or form. Perhaps I’m wrong.
It is quite concerning that a controversial topic like UFOs, which were for years considered to be a “conspiracy theory” despite the fact that there was more evidence for the phenomenon than much of what we accept as fact today, have to be presented in a legitimate way via mainstream media outlets for the masses to accept and become aware of their reality. It’s concerning because it goes to show how much mainstream media, which has always had close ties to large corporations, governments and intelligence agencies, influences the perception of the masses. This allows, as I would call it today, this machine of psychological warfare to manipulate human consciousness in ways that best serve their interests. We’ve seen it before with a variety of topics, like geopolitical issues for example, and I am quite concerned that we will see the same thing with regards to the UFO phenomenon. I am concerned about governments and mainstream media shaping the masses perception about the phenomenon,  but so far it’s been nice to see the topic receive the legitimacy it deserves.
The UFO subject leaves no aspect of humanity untouched and opens up conversations that go into physics, biology, economics, history, technology, metaphysics, parapsychology and more. To be honest, the fact that there are objects in our atmosphere performing maneuvers that no known man made piece of machinery is capable of that may be controlled or manned by beings from other worlds is not even the tip of the iceberg.  That’s how vast, complex and fascinating this subject is. There are many questions and discussions to be had around it.
We (Collective Evolution) have been writing about this topic for more than a decade, if you’re interested in going through our article archive, you can do so here
Crash Recoveries: One topic within the subject matter is the phenomenon of supposed crash retrievals.  Apollo 13 astronaut Dr. Edgar Mitchell once told the world that “Yes there have been crashed craft, and bodies recovered.” He is seen making these statements in this documentary. Eric W. Davis, a renowned astrophysicist who worked with the Pentagon UFO program stated that he gave a classified briefing to a Defense Department Agency, as recently as March 2020 about retrievals from “off-world vehicles not made on this Earth.” Christopher Mellon, a former Deputy Assistant Defense Secretary for Intelligence from 1997 to 2002 has confirmed that he was  present during this testimony. He himself has been quite outspoken about the phenomenon over the past few years.  Dr. David Clarke, an investigative journalist, reader and lecturer at Sheffield Hallam University who was also the curator for The National Archives UFO Project from 2008–2013, came across some interesting documents suggesting that the UK was desperate to capture UFO technology. Paul Hellyer, former Canadian defence minister claimed that the protocol when military jets were scrambled to intercept a UFO was to “shoot first and ask questions after.”
The most viewed document from the FBI archives touches upon the idea that the US Government was responsible for three UFO crashes in 1950. Each craft had three bodies inside. You can read more about that specific story here.
Then you have supposed cases like the famous Roswell incident, but there are many multiple dozens of stories like Roswell I’ve come across over the years in my research.
UFO Crash Recoveries: A Classified Corporate Gold Rush: “UFO Crash Recoveries: A Classified Corporate Gold Rush” will be one of multiple themes that renowned UFO researcher/historian Richard Dolan will be covering at an upcoming UFO conference.

I have talked about the acquisition of exotic technology by the military and the black budget world. This time I’m going to go deeper into not just the testing and the attempts to replicate this type of technology but the likely corporate players involved and revolutionary nature of the sciences and technologies involved. What has been developed over the years is a bizarre system of what I often call legal illegality and one of massive profit for certain organizations. – Dolan (source)

If you’re interested about the crash recovery topic, this is probably something you won’t want to miss. It’s called the “UFO Secrecy in a Changing World Conference”, and it takes place on May 20th. You can learn more about it here.
Final Thoughts: Russell Brand recently conducted an interview with NSA whistleblower Edward Snowden. One point Snowden made was that we have to be careful, because not everything that is labelled a “conspiracy theory” is actually a conspiracy theory. This has been proven to be true for not only mass surveillance, but for several other topics like false flag terrorism and perhaps most recently, UFOs. The point is, our world, and more particularly the mainstream fails to have conversations about “controversial” topics that don’t fit within the frame. That being said, it’s not easy to come to grips with the idea that our world is nothing like what’s been presented to us, but that’s something humanity must go through if we want to move forward as a collective.
We have to be very careful when it comes to things that are deemed to be a conspiracy theory, and remember that the very phrase “conspiracy theorist” was used in 1967 in a [url=https://ia801007.us.archive.org/3/items/CIADOC1035960/CIA DOC 1035-960.pdf]classified CIA dispatch[/url] providing instructions on how to manipulate and manage public opinion. This appears to be the manner in which the phrase made its way into the public. They coined the phrase and established it to single out and ridicule dissenters of officially established opinions. Keep in mind that a decades long campaign of “ridicule and secrecy” has been applied to the UFO issue (Ex-CIA Director Roscoe Hillenkoetter).
This is something important to think about, especially in the era of COVID.
To those who believe the phenomenon represents nothing but false deception and some sort of grand plan by the elite, I ask you, why would they ridicule a phenomenon for so long and place it into the conspiracy theory bucket if they wanted to convince people of the reality of UFOs? During the period of ridicule and secrecy a number of researchers showed that it was quite obvious something was going on. Eventually, too many people became aware of it to the point where governments have no choice but to address it because it’s so obvious. That’s where we seem to be now.
Again, the phenomenon is deep and has the potential shift human consciousness and change the way we view ourselves, the cosmos, the nature of reality and why we live the way we do on our planet. We still have a ways to go. For example, if UFO technology has the potential to change our world for the better in multiple ways, will it be used for that? Or will it be used by a small group of people to benefit financially and in other ways? It’s not technology or new discoveries that will change our world, it’s the consciousness that lies behind them, and more. Ultimately, it’s the way